No Regrets: The Guilt-Free Woman’s Guide To A Good Life by senior journalist and writer Kaveree Bamzai is the definitive book for every modern, multi-tasking women.

It’s the book I wish I’d read when I was struggling with my work, my two boys and my life. It’s part therapy, part memoir. It’s the result of listening to women throughout my life — my mother, my aunts, my friends, my co-workers, and women I met through the course of my work. I realise we're all struggling but we don't want to admit it,” says author Kaveree Bamzai, whose No Regrets: The Guilt-Free Woman’s Guide To A Good Life, hit the shelves recently.

While we all wear these invisible supergirl capes which make us believe that we can ‘fly’ around multi-tasking, Kaveree says, “I realised there is no cape that has yet been invented to carry my body weight, so I might as well lay down this burden of perfection and tell it like it is.”

The book is poised as a guide for the modern, multi-tasking woman to live life on her terms, free from the burden of conventions and expectations. “It is not only possible but it is imperative too. If we are to rule the world, which we eventually will, we have to be sane. And we have to raise sane children. We cannot funnel all our neuroses and our madness into our children, our spouses and our significant others,” says the independent journalist, who adds, “The rising rate of mental illness in society is not an accident. It’s the result of women controlling themselves and putting themselves into straitjackets for far too long. We have to fulfill our responsibilities, our  workplaces and society at large, but we also owe it to ourselves to do so on our terms. Learning to say no is hard, but it has to be done.”

Kaveree says that the most interesting thing that she has discovered through her work is that everyone loves a good conversation. “The art of talking to each other is dying, thanks to our preoccupation with social media. The give and take in a conversation, listening and talking, thinking and responding is on its way out. I am glad I’ve had — and I hope continue to have — interesting conversations with interesting people. That will ensure I never run out of ideas,” she says with a smile. 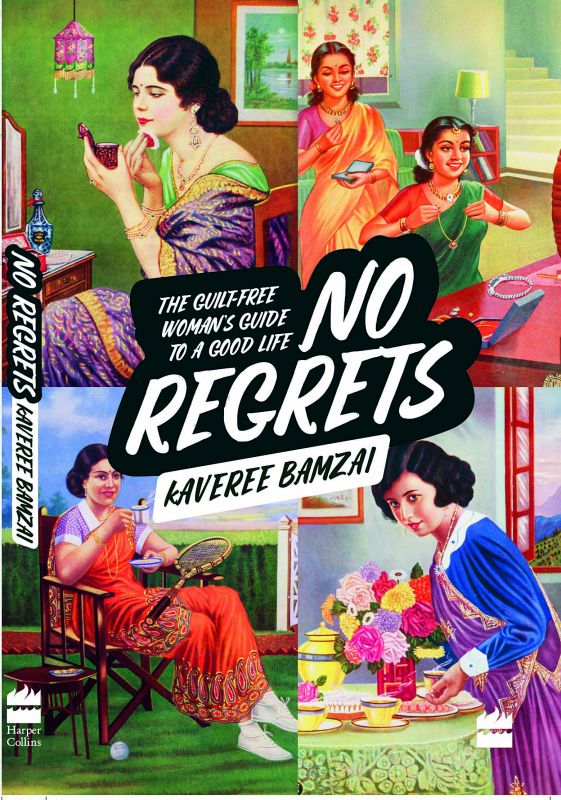 Through her book, the first woman editor of one of India’s largest news magazines, a wife, and mother of two, tells us how to live a guilt-free life, with a little help from a host of accomplished women — Naina Lal Kidwai, Arianna Huffington, Sudha Murty, Smriti Irani, Twinkle Khanna and Sania Mirza.

“So many young women would come up to me during the course of my various jobs and ask how I do it? ‘It’ referring to a full-time job (which I did for 31 long years till I quit full-time work in January this year), raising a family, looking after various people in my life. I would tell them it's easy. Or say something glib. But I realised it’s not easy. It is tough. But it has to be done. And I thought why not write about what I have learnt and share what some of the brilliant women who’ve crossed my path have taught me,” says Kaveree, who emphasises that No Regrets is not a self-help book. “If anything, it tells you what not to be, rather than what you are expected to be,” says the graduate of Delhi School of Economics.

With remarkable candour and humour, Kaveree touches upon a range of subjects like work-life balance, female rage, money management, motherhood, tackling pain and grief, health, the power of faith, dealing with social media, creating a network, growing old, and never ever giving up work.

“I wrote the way I always do, which is the way I speak. I just listen to the voice in my head, and the rest just comes naturally. Of course, I have also been influenced by some lovely writers like Nora Ephron, Maureen Dowd and Julie Burchill. I've always wanted to be the clever girl in nerdy glasses who has a Dorothy Parker witticism for every occasion,” she says.

“The part that features my mother extensively is my favourite. It’s only when I was writing it that I realised how much she had sacrificed to raise my brother and me,” says the author, who credits her editor Diya Kar with helping her pick the right title. “I was playing around with titles which kept getting longer and longer when Diya put a firm stop to it, saying #NoRegrets. That’s it. End of discussion. And it was!” recalls Kaveree, whose next project is a cultural history of the last three decades in the Mumbai film industry.