Journey through the past

The Last Watchman of Old Cairo begins almost a thousand years ago when Ali, a Muslim orphan, becomes the night watchman at the Ibn Ezra Synagogue, built at the site where the infant Moses was taken from the Nile. A couple of centuries later, in 1897, twin sisters Agnes Lewis and Margaret Gibson arrive in Cairo to acquire the ancient scrolls held in the synagogue’s Geniza, a sacred storage vault. And now, Joseph, a half-Jewish and half-Muslim student travels to Cairo on receiving a newspaper clipping from his recently deceased father. What binds all three stories is the legendary 2,000-year-old Ezra scroll, purported to be “a perfect copy of the Hebrew scriptures written thousands of years ago” that was supposedly stored in the synagogue. The author magnificently stitches the three narratives across centuries around the fabled scroll that intrigued him. “I came across a brief mention of the Ezra Scroll in a footnote to an academic article about the German Jewish scholar of mysticism, Gershom Scholem. The moment I read about this perfect Torah scroll, which was purported to have magical powers, a shiver went up my spine and I knew I had to find a way to fit it into the novel,” he says. 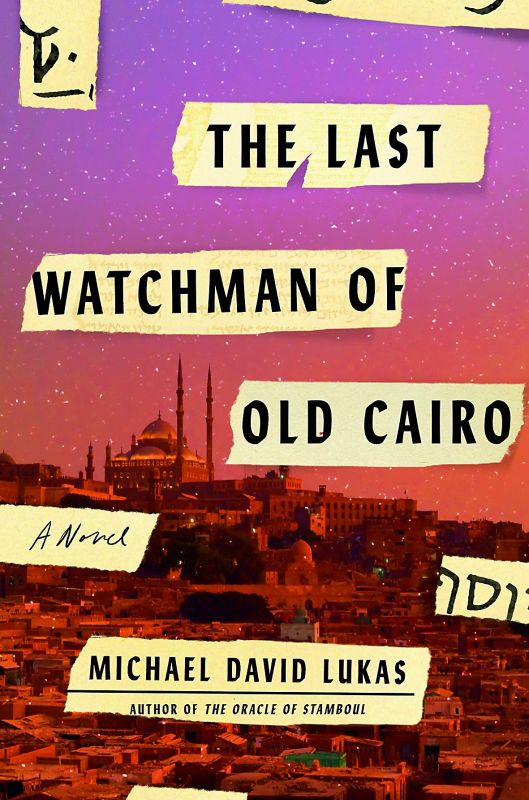 Jews consider texts that include the name of God sacred and when they are no longer usable, they are either buried or stored in a storage room or vault of a synagogue. Like other synagogues, the Ben Ezra Synagogue also contained a Geniza, and over the centuries, the Jewish community had deposited various documents there — some priceless, some mundane. “The first time I heard of the Cairo Geniza, a treasure trove of documents stored for hundreds of years in the attic of an ancient synagogue, I wanted to know more. Luckily, there are a number of really great books about the Geniza, and the Jews of Cairo, in general. The first one I encountered was In An Antique Land, by Amitav Ghosh, which does a wonderful job of describing the medieval Mediterranean world in all its cosmopolitan glory. Aside from that, I also leaned heavily on the gripping academic history Sacred Trash and a brilliant six-volume depiction of the Jews of Cairo called A Mediterranean Society,” he adds.

In the tightly woven tale, each narrative is peopled by characters whose importance lies in the era they live in. The characters here are not flamboyant and some of them are based on historical personages, some inspired by people he has known while others are entirely invented. “With a few small exceptions, the characters in the nineteenth-century plotline really existed. The story of the al-Raqb family was inspired by a conversation I had on an airplane with a Bengali Muslim woman whose family served for generations as watchmen of a synagogue in Kolkata. And the characters in the contemporary section are based on my own experience living in Cairo in the fall of 2000,” he says adding that when he started writing the book, the idea was to be a big doorstopper spanning a thousand years of Jewish history in Cairo, with a plot line for each century. But, soon after he started writing, he realized it was going to be too convoluted and vast to write. “So I whittled it down a bit (to seven plotlines, I think). Then
I whittled it down a bit more. By the time I got to the fourth draft, I had gotten the book down to three plot lines: one in the eleventh century, one in the nineteenth century, and one at the cusp of the twenty-first century. The next four or five drafts were about refining, getting the characters right, and making the structure work, which took a lot of energy, but paled in comparison to the tectonic shifts of the first few drafts.”

In his exploration of the ten centuries of Cairo’s history, including times when the city’s Jews and Muslims lived side by side in relative harmony till the expulsion under Egypt’s former  Gamal Abdel Nasser, Michael keeps hinting at the future possibility of peaceful co-existence. As Joseph explores the roots of his father’s family in Cairo where his forefathers used to be the watchman of an ancient synagogue, protecting its secrets and faith with their courage and sacrifices, highlighting this aspect. “I wanted Joseph to embody the themes of hybridity and co-existence that sit at the heart of the book. I wanted to see what happened when these, often external questions became internal. Plus, I’ve always been obsessed with the idea that (because Jewish lineage is matrilineal and Muslim lineage is patrilineal) you can be fully Jewish and fully Muslim at the same time,” he says.  When he set out to write the book, he imagined it would stick closely to the experience of the Jews of Cairo, which meant that it wou
ld be narrated primarily by Jewish characters. “But, as I dug into the book, I realised that it’s actually a story about crossing boundaries. It’s a book about the day-to-day experience of co-existence. The different voice, then, reflect this theme of multiculturalism and hybridity,” says the author.

Michael who has already begun work on a retelling of the biblical Book of Esther set in a post-apocalyptic future, feels that if he could force readers to take one thing away from the book, it will be this: “We need more bridges and fewer walls, more windows, and fewer mirrors. And in this particular moment, I think, we need stories about people living together, not necessarily in harmony, but with respect and the hope of mutual understanding,” he concludes.