I don’t mind being the underdog: Ranvir Shorey

DECCAN CHRONICLE. | ROHIT BHATNAGAR
Published Nov 20, 2016, 12:27 am IST
Updated Nov 20, 2016, 7:14 am IST
Ranvir Shorey opens up about his upcoming movie Moh Maya Money, being an underrated actor and living life in the fast lane, on his own terms.

Ranvir Shorey, known for essaying unconventional roles, doesn’t want to water down his sensibilities while picking up a project. The actor is gearing up for his next film, also his third one with Neha Dhupia, Moh Maya Money. In a candid conversation, he talks to us about work, the illusion of fame and money, and playing father in real life.

Moh Maya Money is yet another unconventional film from you…
The film is set amid corrupt, middle class Delhi. I don’t mean a corrupt police officer or a government officer. I am talking about the middle class where there is greed for money. The film is the story of a couple, whose life has come undone. It is a fabulous script and has a very fresh perspective. You have to watch the film to know what I’m talking about. My director Munish has shown greed in all its glory in Delhi — how the whole system is rigged. There is an interesting angle to the film too. How men and women are corrupt differently. I believe that both the genders have different tendencies when it comes to corruption.

How was it working with Neha Dhupia for the third time?
She is fun to work with. She is talented and hard working. Besides that, we are friends for 10 years now. She always brings positive energies on the sets. I have worked with her in Mithya and I am 24. While Mithya did quite well, I am 24 didn’t, but they both are fabulous films.

What makes you so choosy when it comes to commercial films?
I don’t think I get enough offers and I am not being modest about it. Somehow people have this impression about me, that I get enough film offers to be choosy, but it’s not like that (laughs). However, I find it difficult to water down my sensibilities just for the sake of working. This is the problem with me. If you see all mainstream actors and directors, they are probably more educated than me. They travel around the world, listen to better music but when they are working, they are making films for the LCD (lowest common denominator). I can’t see myself doing that and that’s why I end up choosing less number of films. 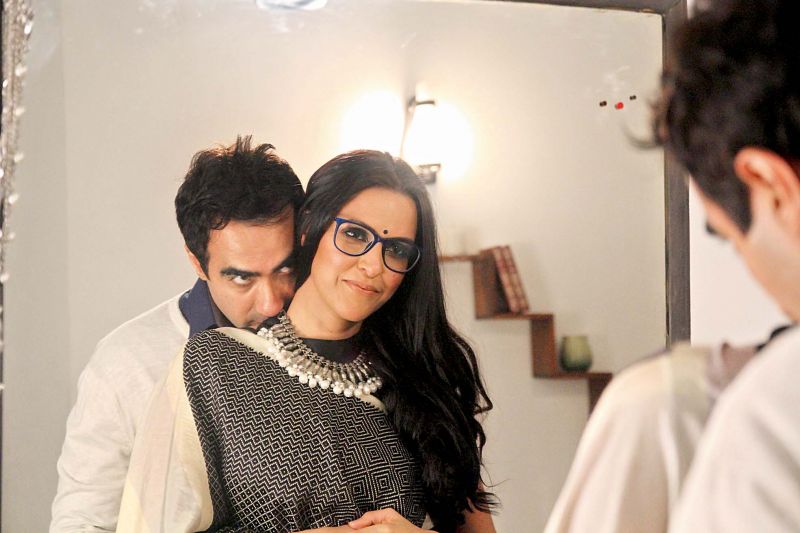 Still from Moh Maya MoneyHow do you deal with it when people associate  you with art cinema?
I shall thank everyone who feels that I am an underrated actor. I also thank people for comparing me to actors like Konkona and Rahul Bose. But all I want to say is that I don’t mind being underrated or an underdog. I’d rather be that than be overrated and entitled. I don’t mind fighting for this. I am happy being this way.

How do you feel when you choose a film and it doesn’t work?
I never had a plan. I go with the flow and most importantly, I love what I do. When I choose scripts, I try to pick the ones that I love. I don’t like to compromise on anything. Fortunately, I managed to pick a few projects where I was in two minds, and it worked. I feel I am not doing too badly. It is a hard business, especially when you are not a huge star. This is the industry where you will self-doubt every day. The acting profession is full of insecurities but that’s just part of the business.

Considering your tough process, were you okay doing roles in a Salman or an Akshay starrer?
Ek Tha Tiger wasn’t a Salman Khan film, it was a Kabir Khan film. Salman was the hero of the film. As for Chandani Chowk To China, I signed it because it was a great script on an international level; later due to some changes during postproduction, it didn’t turn out the way I thought it would. Singh Is Kinng, was a comedy with a huge star cast besides Akshay Kumar. Although it might look like it was the epitome of mainstream cinema, if you look at the screenplay, it wasn’t really a run-of-the-mill comedy.

Is it difficult for you to babysit Haroon alone?
It is not difficult at all. His mother (Konkona Sen Sharma) and I have managed to balance quite well. When she is working, I take care of Haroon and vice versa. I think he is enjoying it. He didn’t have any qualms about it. He is enjoying the best of both the worlds. It is going well.

What are your next projects?
In the past one year or so, I did Moh Maya Money, A Death In The Gunj, Kadwi Hawa, Tennis Buddies, In The Shadows and I just did a TV series, Metro Park. So I am looking forward to have some rest. I need to spend time with Haroon now and chill. (smiles).