The lives of others

Amid the ruins of an ancient occult Tantric temple at Mitawali in Chambal Valley.

From shooting images for a magazine during his school days to teaching the nuances of camera to Jewish American kids at a summer camp when he was in St Stephan, Amit Pasricha was always certain that he'd take up photography as a career option.

For the last 33 years, this self-taught photographer has slowly and steadily learned the language of photography with a special focus on his subjects that bring forth multiple perspectives to an image. “Initially, you spend a lot of time learning how light plays an important role, the language and skills of photography, exploring how far it will go dibble dabbling on various subjects,” says the photographer who spent many days in the crowded bylanes of Chandni Chowk and Old Delhi. “I would spend the whole day, looking at life and framing it. After having spent a lot of time doing that, I was then able to express what I saw through the subjects that excited me,” he says.

A family and their cow amicably share living space in this cosy village home in Urcharsu in Pulwama district, Kashmir.

The ace cameraman has captured his various subjects in projects such as Monumental India Book, The Sacred India, India At Home to India Lost and Found and now One India Many Lives. “A subject takes five to seven years to grow for you to be able to see something in it. It could be a human or an object,” he adds.

It was during the completion of The Sacred India, that he clicked a picture inside a sarpanch's house in Sitapur, Uttar Pradesh, which excited him. “When I looked at it, I was able to get a sense of their life. This picture then sat with me for a long time, while I was finishing the book,” says Amit who by then had found his next subject — India At Home. Instead of making a list of people or their homes, the documenter traveled to 21 states and two union territories capturing the panoramic view of lives. It took him seven years to bring multiple stories of middle India together. “I moved to panoramic work because describing life in bits and pieces wasn’t fulfilling. I wasn't able to get a complete picture. I realised that I just wanted to feel very simple and at ease with the subject and my photographs,” he smiles. And so his photographs not only became an expression of his focused point of view but were also larger than life. “I explained to them that I am here to photograph their life. I am going to stand in this corner and you’re free to sit where you want, you want to acknowledge me or lie down,” adds Amit. The only restriction — no Sunday best clothing since you are sitting in your home.

Rathwa Adivasi - a tribe that inhabit the Chhota Udaipur hills of eastern Gujarat.

According to Amit, a photograph is complete only when one is able to look beyond the ‘wow’ factor and find something additional every time they look at it. “Otherwise it is just an Instagram post if it has got nothing to reflect on. What is the viewer taking back with them?” he asks. 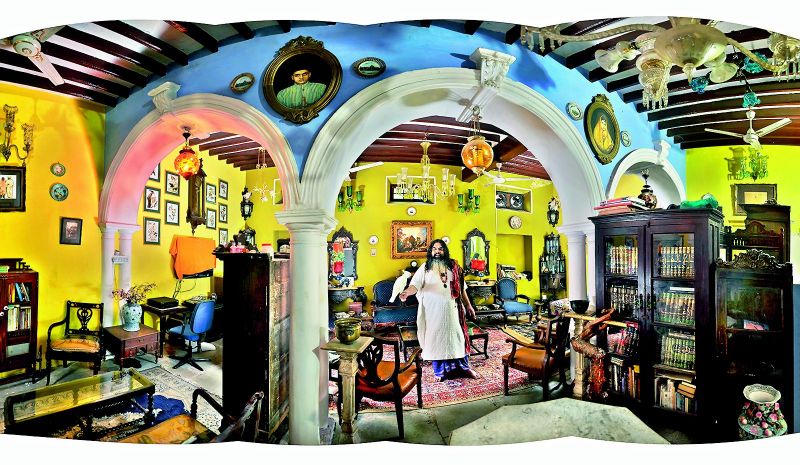 A man poses with his pet cockatoo in Hyderabad.

For his current project — One India Many Lives — the documenter is looking into the dualities of human lives. “I came across a sadhu in Banaras who is covered in ash in the morning. By 11 o’clock wears jeans and a t-shirt, opens his hair and turns a hippie. Clearly, there are two people here,” says Amit who is now chasing a man in Aligarh who built a Taj Mahal for his wife. As a photographer, Amit only sees the beauty in one's perspective that goes beyond their own understanding.