For close to a decade, Sheikh Hamad al Thani of Qatar had been amassing a collection of Islamic art, Mughal jewellery, bejewelled daggers and diamond encrusted swords from all over the world. His sellers have included royal families, antique dealers and jewelers, many from India and some based abroad. By this, Sheikh Hamad was following in the footsteps of his Kuwaiti counterpart, Sheikh Nasser who had through the 80s and 90s conducted a sweep across India, often picking up invaluable pieces of Mughal jewellery and art for what would today be considered throw-away prices. Nasser’s treasures, known as the Al Sabah Collection eclipse even the grandeur of Al Thani’s, both in terms of value and historical importance. His buying sprees had triggered an interest in all things of Islamic cultural value for Middle Eastern royals, the Saudis included, whose own cultural heritage lacked the sheen and shine of Mughal, Nizami and Ottoman bejewelled wonders.

Employing the expertise of Christie’s Head for Asian art, Dr Amin Jaffer further enlivened the Al Thani collection’s efforts, since it opened up the Sheikh to newer avenues for procurement. Jaffer, a bon vivant and citizen of the world had trained with Hyderabad’s own Jagdish Mittal and had a rich background curating the splendors of India’s erstwhile past, having written several coffee-table books on the subject of royal jewellery and art from around the country. Soon Sheikh Hamad was seen hobnobbing with Indian royals like Maharana Arvind Singh Mewar of Udaipur, Princess Esra Jah of Hyderabad and Princess Rajshree of Bikaner. Trips were made by representatives to Hyderabad, Mumbai, Delhi and fiefdoms across Rajasthan, and handsome sums paid in exchange for centuries old family heirlooms.

After showing it across the globe — Paris, Venice, Beijing and New York, Sheikh Hamad, in a surprise move, decided to auction off some of the collection’s most noteworthy pieces through Christie’s on June 19 in New York. The auction, which lasted well over 12 hours, comprised of almost 400 pieces, many of which were attributed to having once been owned by the Nizams of Hyderabad. Totaling close to 110 million USD or 770 crore INR, the auction is said to have been orchestrated in order to contribute to the infrastructure required for The Al Thani Collection’s final resting place at the Hotel de la Marine in France. While some consider this to be a spring cleaning of sorts, editing the collection to only display the very best, others point out that there were in fact pieces of historic importance auctioned that could never be bought back again. Exotic conspiracy theories include ancient Mughal/Nizami cursed items that the Sheikh wanted to get rid of in the guise of a larger auction, given that they were the cause behind Qatar’s recent diplomatic brouhaha with their Arab brethren. Whatever the reasons behind the auction, it was all splendidly presented. 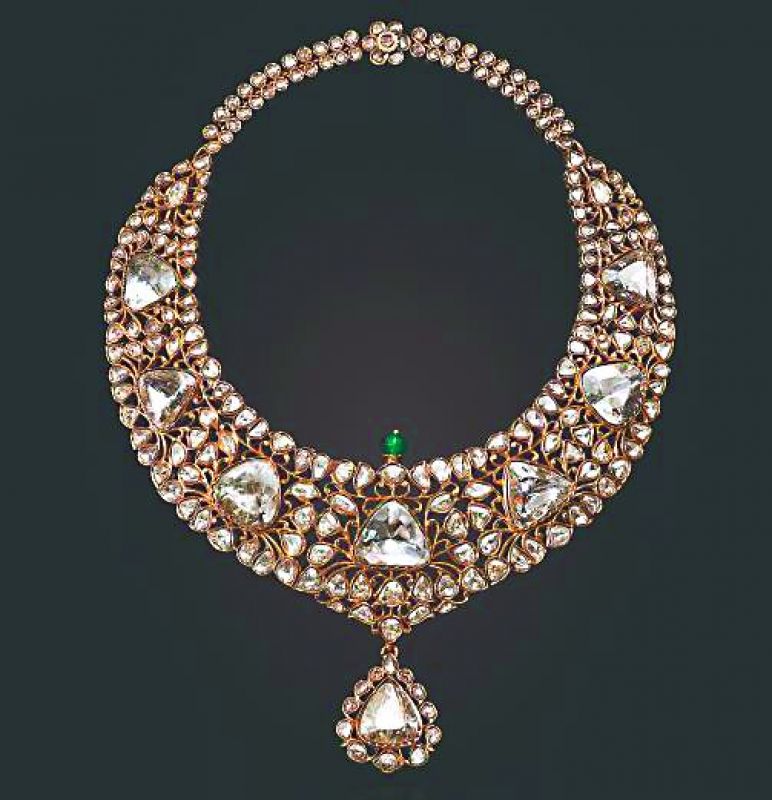 An Enameled and Gem Set Model of a Parrot $1,035,000
This parrot model is set with diamonds, rubies and emeralds with a
pendant emerald hanging from its beak. 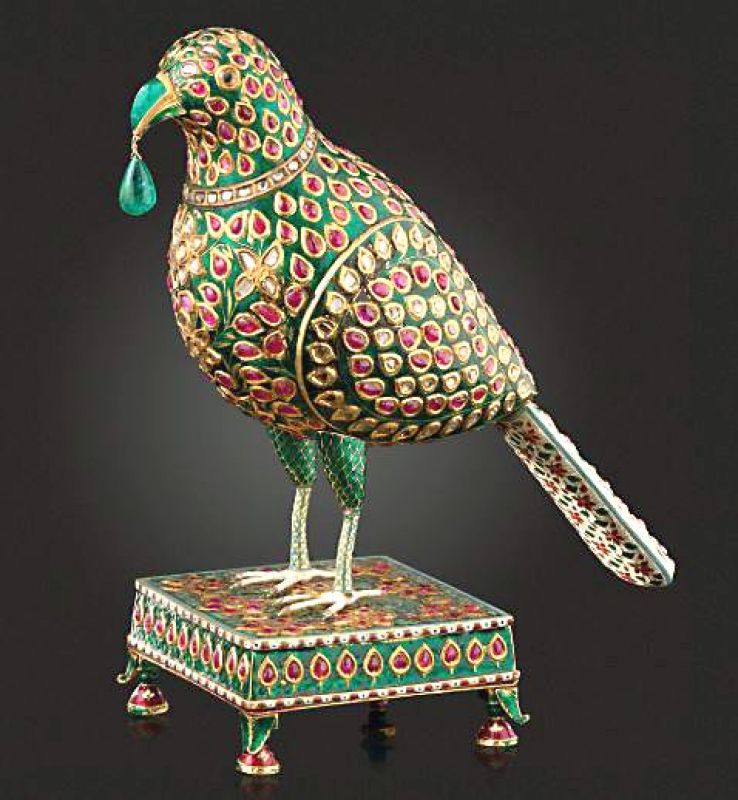 An Antique Gold and Diamond hair ornament $25,000
The hair ornament is known for its round and triangular faceted and table-cut
diamonds. 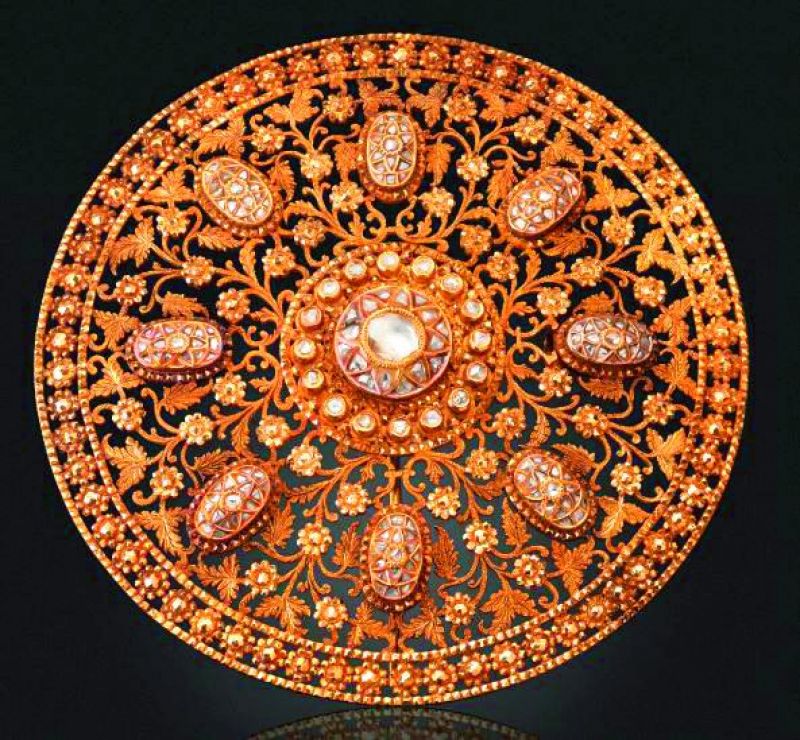 The Baroda Pearl Canopy is known to be set with approximately 950,000 basara pearls along with diamonds rubies emeralds and sapphires. This extraordinary finely crafted precious canopy was commissioned by Maharaja Khanderao Gaekwad of Baroda and later in the collection of Maharani Sita Devi of Baroda. The piece earned almost twice the highest estimate. 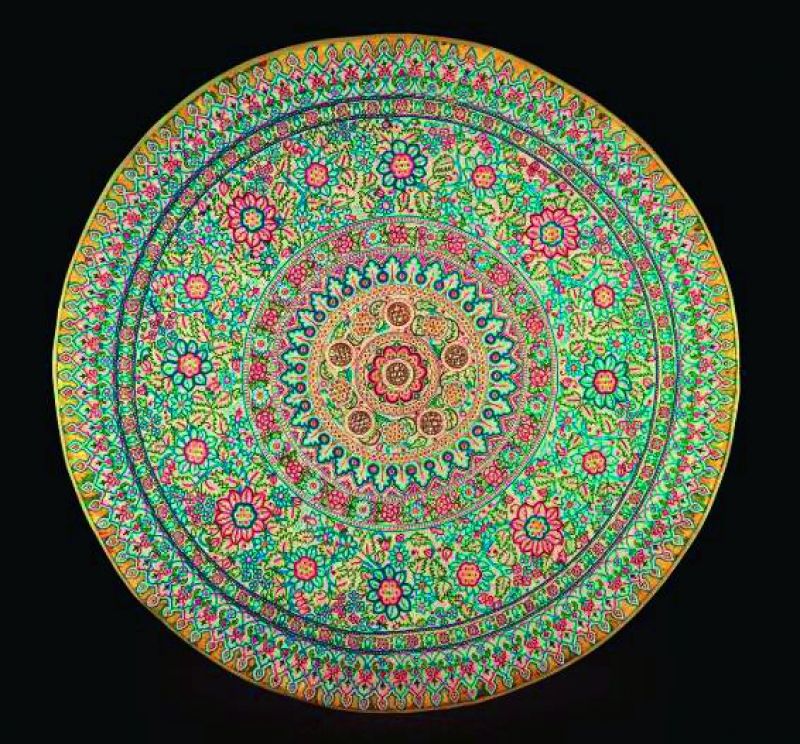 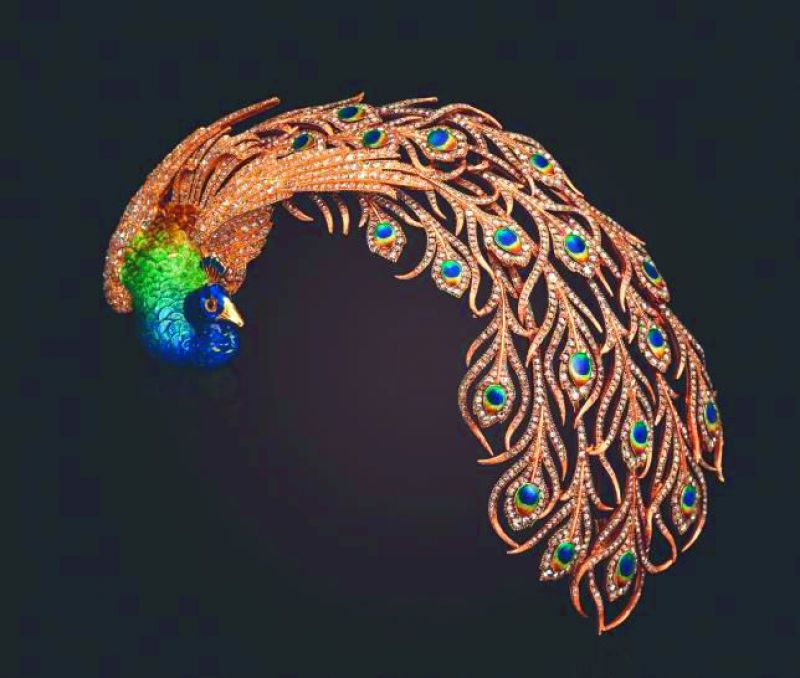 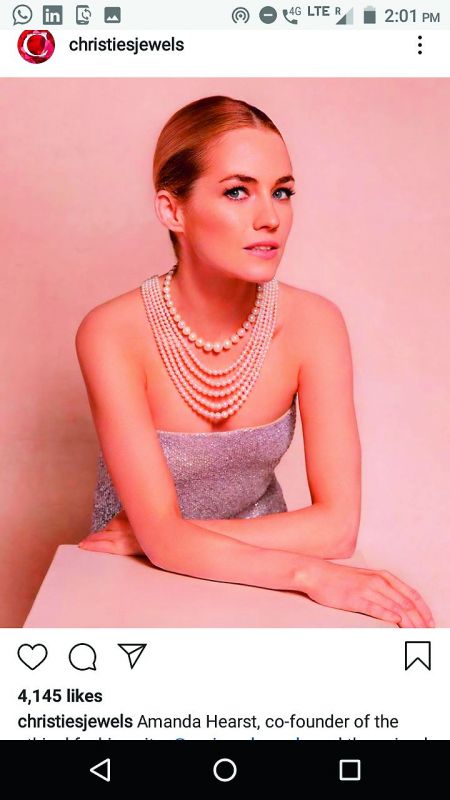 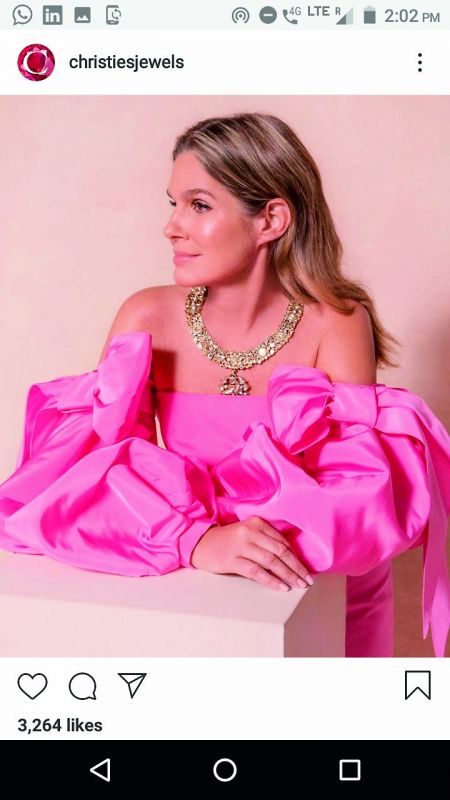 Rahul Kadakia, International Head of Christie’s Jewels Department was the man behind the auctioneer’s podium for the first part of the acclaimed auction. A rising star among Christie’s pantheon of experts, Kadakia has made a name for himself at handling some of India’s most prominent jewels. We spoke to him about the record breaking day, what the auction signifies for the market and what we can expect in the future.

Excerpts from the interview:

Q What, according to you, were the highlights of the auction?

Q Sheikh Hamad al Thani spent almost a decade collecting pieces from India, even appointing former Christie’s honcho Dr Amin Jaffer as a curator for the collection. People expected him to open a museum dedicated to it, why then, do you feel, did he dispose off so many pieces of his collection?

The global Al Thani collection accounts for around 6,000 objects and is a very diverse group. When the museum project at the Hotel de la Marine in France will open in Spring 2020, the main idea is to showcase all the different collecting fields in a balanced way.

QThere were many pieces in the collection, once originally owned by the Nizam’s family. Which were the most noteworthy according to you?

The ceremonial sword of the Nizam of Hyderabad was a stunning jewelled weapon, setting a new world auction record for any Indian sword when it sold for $1,935,000. The diamond riviere and the important necklace set with 8 stunning Golconda diamonds achieved exceptional prices too.
The Golconda mines stopped producing significant stones at the beginning of the 18th century and have yielded some of the most stunning diamonds known to the world. It is a fabled mine and important stones with a Golconda provenance now carry a premium over similar diamonds mined in other areas at a later date.

Q What according to you was the star of the auction, the jewellery, the miniatures, the stones, jadau pieces or the weapons of historical importance?

The fact that such a collection where each object had its rightful place, is the most outstanding point. To present for sale 387 objects of museum quality was a real honor and we are grateful for having had the chance to work with the collection over the past months.
Strong bidding came from the US, India and Europe. We had significant bidding and underbidding from Asian collectors and we welcomed strong institutional bidding throughout the auction.

A Diamond set and Enameled gold covered Bowl and Stand $350,000

The set’s cover has a square cabochon foiled ruby finial, while the underside of the cover flaunts engraved radiating lobes flanking a lion rampant in floral meander border. 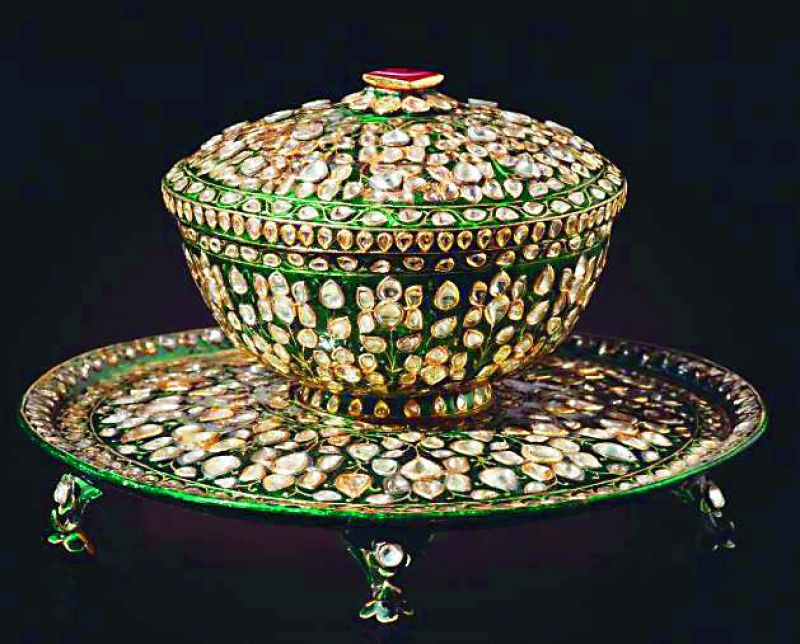 The Antique Ruby, Diamond and Enamel Bracelet $435,000Made in the 18th century this bracelet consists of cabochon and table-cut rubies, table and rose-cut diamonds and green, red, white and black enamel. 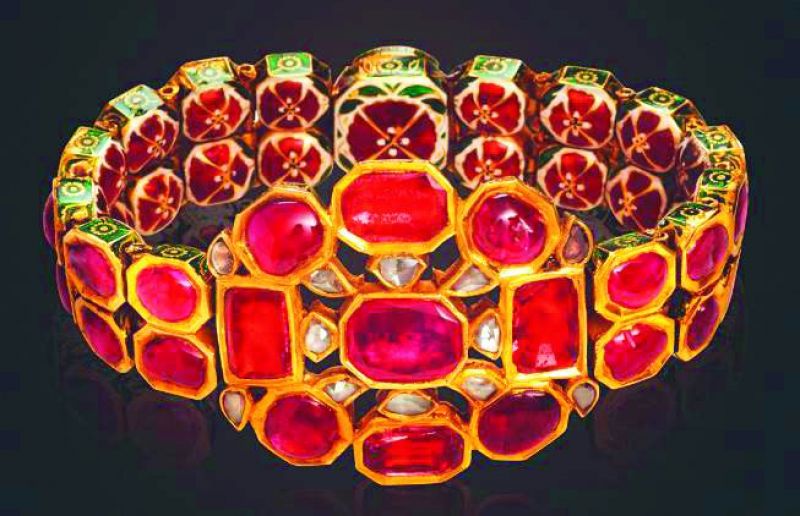 The Dagger is set with rubies and emeralds with a  pierced watered-steel blade fitted with three channels containing free running seed pearls. While the velvet-covered wooden scabbard has an enameled gold locket. 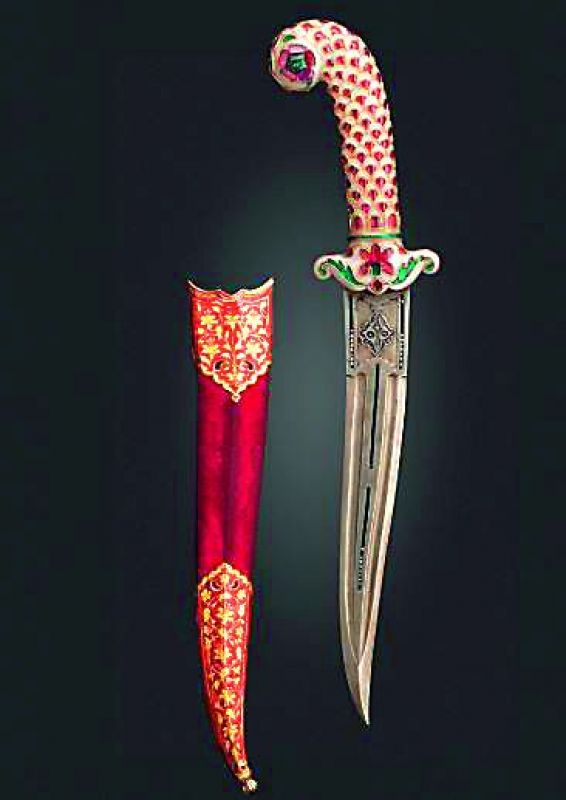 Set with diamonds, rubies and emeralds, consisting of three parts, vase, hose port with stem and tray, with a cloth-covered base and pipe. This Huqqa marked a new world auction record. 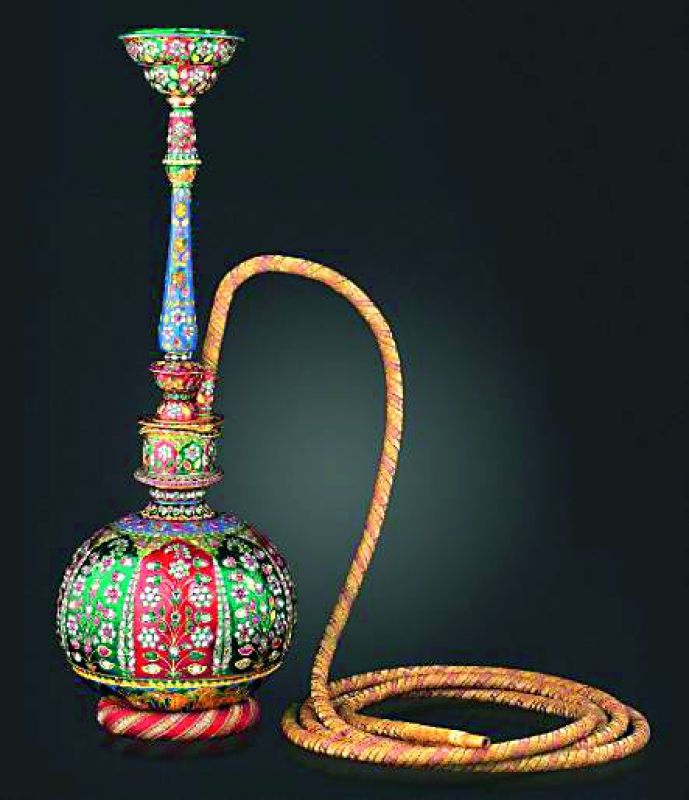 A Ceremonial Sword of the Nizam of Hyderabad $1,935,000Inscribed steel blade with a gold hilt set with diamonds, rubies and emeralds this sword established a new world record for an Indian Sword. 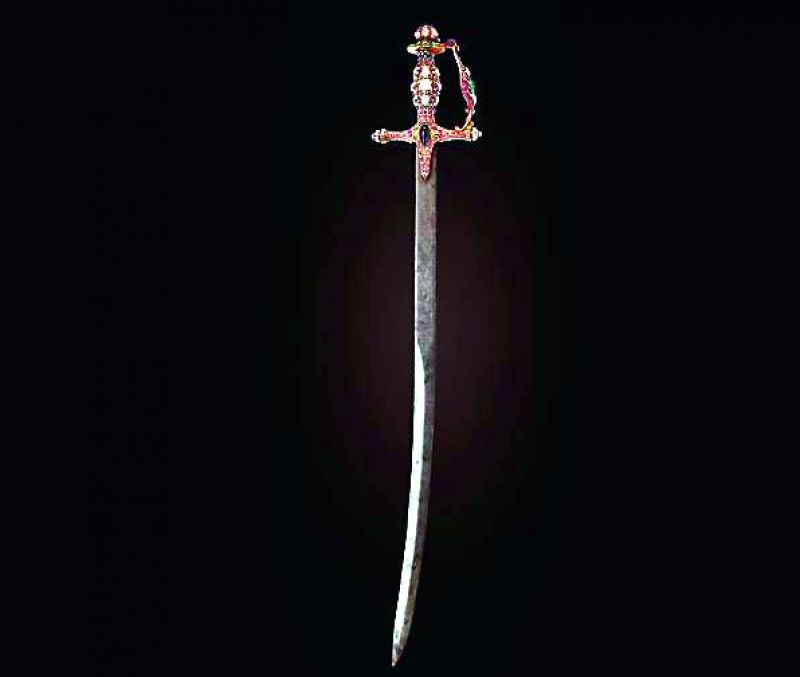 Lauren Blauren co-founder of feed a global initiative to feed children in need wears the antique necklace. This necklace showcases hexagonal and rectangular-shaped emeralds with table and rose-cut diamonds. 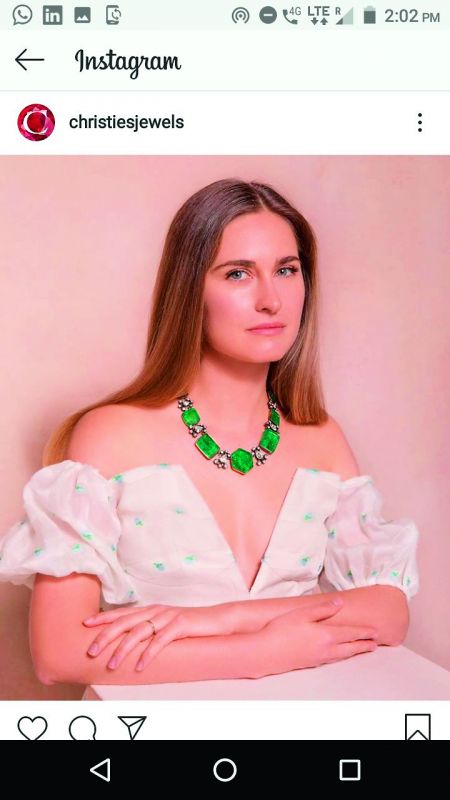 The turban ornament set with old, baguette and pear-shaped diamonds is detachable and can also be worn as a brooch. 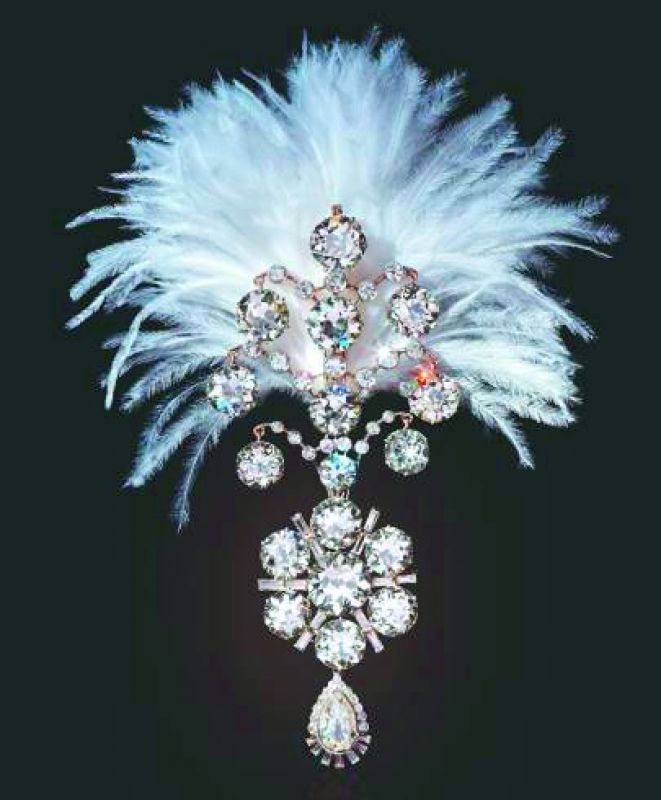