If her thoughts on bilateral relations were music to your ears, wait till you hear her sing. We all have known Nirupama Menon Rao as India’s former ambassador to the United States, China and Sri Lanka but now she has donned a new avatar, that of a musician.  The former bureaucrat who recently launched her album shares where the seeds of this special talent were sown, “I began singing as a kid but it was limited to being a hobby. I never took any vocal training when I was young. I used to listen to the radio and repeat lines following tunes. In those days, we used to listen to popular Western music on Radio Ceylon (Sri Lanka) and we liked Western musicians like Elvis Presley, Bob Dylan, Jim Reeves, The Beatles and others.”

Not much of Bollywood music, we ask? Rao, who is now based in Bengaluru, explains, “I grew up in Tamil Nadu in an all-girls school, where everyone was kind of into Western music. I listened to Hindi songs and watched Hindi movies but I never sang those songs. The English songs were meant for the lower voice, which I have as opposed to the female voices in Hindi songs that have very high range. So, the former suited my voice better.” In 1973, Rao topped the All India Civil Services Examination for both the Indian Foreign Service and the Indian Administrative Service, and joined the former. It’s quite obvious that music took a backseat in her early 20s.

She reminisces, “Academically, I was quite a high achiever and always did well in studies. I was the topper in high school, college, and my career dream was to join the Indian Foreign Services. When I was 15, my father bought me a guitar and I had learnt a bit of strumming. I would pick up the guitar and sing a few songs when I wasn’t studying or had a little free time. It was meant for only relaxation. But later, with so many responsibilities, there was very little time to pursue music.” But a reunion with music was destined to happen. “For about 30 years, I didn’t do it at all. Then I thought of trying again. I took a few voice lessons with music teacher Situ Singh in Delhi. But I couldn’t sustain it owing to my busy schedule. Then I went to Sri Lanka as High Commissioner and made some lovely friends there who were into music. It rekindled my interest and I started all over again after a long hiatus.” 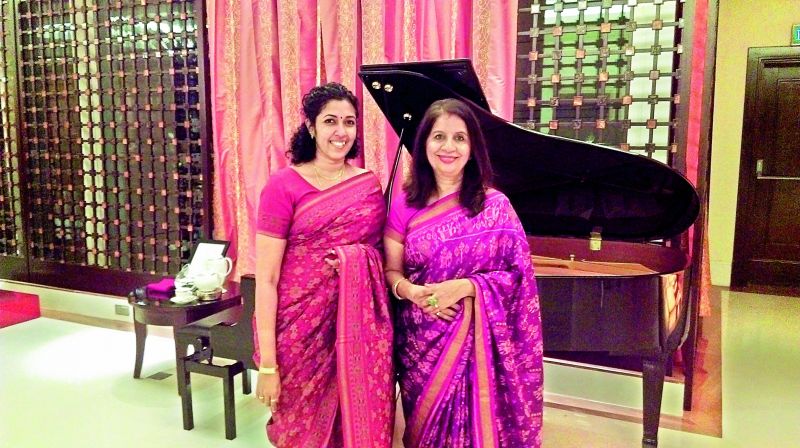 Did the ministers, other diplomats or sub-ordinates know about her ability to mesmerise a gathering with her mellifluous voice? “Not really. I never sang at any official gathering. But yes, some of my friends in the media knew about my ability and in informal gatherings, would request me to sing a few songs. Basically, in those years, singing was all limited to close-knit parties and my friends never made it public,” she answers.

Her album that released last month is a commercial one released by Universal Music with Peninsular Studios in Delhi. The music is available on most digital platform. Some of the 14 songs in the album are original compositions while others are covers and each one was chosen by Rao. “There is a Tagore song — Purano Sei Diner Kotha and there’s Vaishnav Jan To, Gandhiji’s favourite bhajan that I sang with a Sri Lankan girl’s choir with a very different interpretation. Then I discovered two songs that had an Indian connect but had not been performed since 1950s. They are sung in English but the rhythm is very Indian. Rest of the songs are from Western repertoire. The music arrangement is original and my friend from Sri Lanka Soundarie David Rodrigo accompanied me on the piano. My friendship with her in many ways became the catalyst for my album. She assisted me a lot in developing the confidence,” she informs as she plans to name her band with Soundarie and sound engineer Neranjan De Silva as ‘Adam’s Bridge’ (which is also known as Rama’s Bridge or Rama Setu).

A well-known proponent of the dialogue over war, Rao named her album Peace Is My Dream. Inspired by the likes Vijaya Lakshmi Pandit and Nelson Mandela, Rao has been an ardent supporter of reconciliations, she says, “Although, we talk about revenge and teaching lessons through war, our basic instinct as humans is to live in peace with one another. Speaking for women, we want peace as women know best about the ravages of a war. We should all see how we can reduce differences.” She is also all for collaborations between artistes from different nations. “The creative minds shouldn’t be stopped from reaching out to each other. We must think in terms of our future generations. I don’t discount the importance of patriotism but countries can prosper only when there is peace,” she adds.

So, where do music and diplomacy cross paths? “Music is very much part of cultural activities, which in turn is a crucial part of diplomacy. As an ambassador, you keep hosting music and dance recitals or lectures to promote your culture in a foreign land. It helps in building bridges and helps you connect with foreigners while increasing your own understanding of your own culture,” she says and goes on to thank her husband and children for their support all through. Asked if there are more albums in store, she signs off saying she will continue doing two things — advocacy of peace and pursuing music.