A voice for the little ones

Caroline Boudreaux at an orphanage.

We’ve all been at that precipice where disillusionment settles like an unshakeable cloak over the psyche. Ordinary tasks become gargantuan mountains to climb. And hope seems illusive. Yet, there are some that have the gumption to extricate themselves from all self doubt, and see the nadir as a point where they can rise up from, and make something beautiful out of. It’s responsible living, and Caroline Boudreaux, founder of the Miracle Foundation and the winner of the United Nations Humanitarian Award 2017 is a proponent of such change. Among the fortunate few who found her life’s calling at the height of professional success — a handsomely paying job, where Caroline found herself discontented, unfulfilled and looking for meaning. A visit to India, a hapless child she met at Odisha and the decrepit state of Indian orphanages and parentless children shocked her, and Caroline started Miracle Foundation. “The day was auspicious — it was Mother’s Day. I decided I had to do something to help children. I simply could not go on with my life as if they didn’t exist. I couldn’t un-see what I had seen. The idea for the Miracle Foundation was born that day. Every child, every miracle deserves the foundation of a family.

Since then — miraculously — people of all ages, all walks of life, and all socio-economic backgrounds have joined us. Together, we’re giving a loving family and personalised care to thousands of orphaned children,” enthuses Boudreaux. The warmth in her demeanour as she mingles with children, goes about her day’s work is apparent, and the conviction that children are the future is what eggs this kindhearted soul who was categorised among the most impactful non-profit leaders in the US and India. Of the moniker, she enthuses, “We’re categorised as one of the most impactful non-profits as we have a proven methodology that works. We show donors that their investments are going into the minds, mouths and stomachs of the children we serve, and our earnest work has paid off. Bill Gates said it best,  ‘All lives,  no matter where lived, are of equal value.’ Miracle Foundation isn’t working in India because India has a bigger problem. It works in India because this is where we started. All children deserve the love of a family. We’re working with organisations all over the world to make sure children have a family, not an orphanage and not a state to look after them. They need families, no matter where they live. My favourite change about India is her youth. They get it. They know and want to change the plight of the poor.” 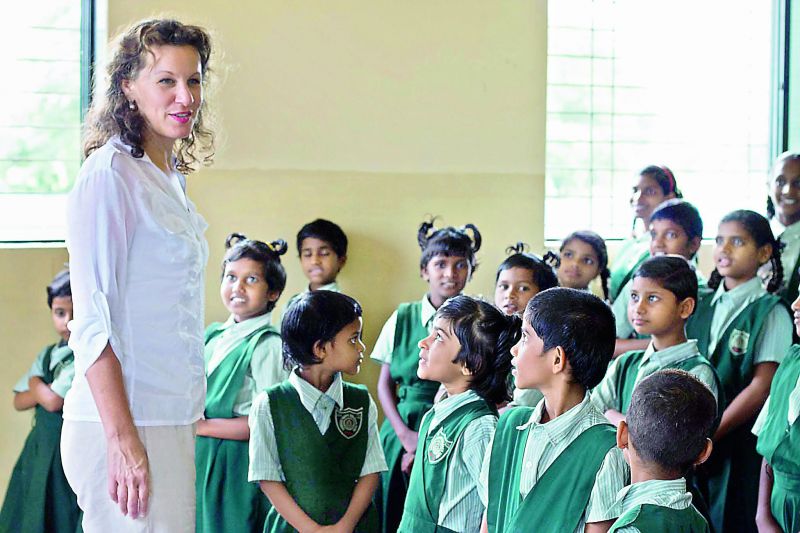 The winner of the Hope Award in 2005 and the Impact Award in 2008, she takes these accolades with grace, “The awards help because they bring awareness to the cause. It’s always nice to be noticed, of course. If I have to pick one award that I cherish the most, it’s the United Nations Humanitarian Award I was honoured with in 2017. It recognised the work my team and I have done on Sustainable Development Goals, and child rights globally.” Today, Miracle Foundation is working with more than 7,500 children in 169 communities. They strengthen families and communities, so children can live with a family that knows and loves them. Yet, the situation in India is far from perfect. And Bordeaux is optimistic, “The biggest lessons I’ve learned is to listen to the children. According to the United Nations Rights of the Child, they have the right ‘to be heard and participate in decisions that affect them.’

Ask them, and they’ll tell you that they want to live in a family, they want an education and a future, and they want to be cared for by someone that loves them, not someone who is paid to care of them. The biggest challenge faced by an NGO is the ability to help enough people. That, of course, is a matter of raising enough money. And, the way to do that is to show donors where their rupees are going, and its impact. The measurability of our interventions ensures we know the exact impact of donations, which enables us to provide full transparency and maintain integrity.” The New Yorker who also has a home in Austin, has learnt the art of meditation and mindfulness after the travails of a career in advertising, “I unplug regularly and don’t have any problems relaxing — because I know it makes me better when I am plugged back in!” she reveals. Of the many miles Boudreaux travels, she has many more miles to go, brandishing a cause so dear — that of embellishing the life of a child. Next on her itinerary is London.

“My next trip is exciting: I’m headed to London to meet with 32 organisations making a  difference for orphaned children around the world. This is the first time we will be bringing these organisations together. The goal is to work in partnership  and to agree on the same goal: A loving family for every child and the end of institutional care, by 2040,” she says, hopeful. Indian orphanages might be better than what they were, but many are still decrepit. “I don’t feel that things in India are not up to mark. I won’t say that everything is perfect. But efforts are being made to make things better. For you, for me, and — most importantly — for the children. I know that our future is better because the children’s  future is better. CARA is working to streamline the process to reduce the opportunity for corruption, and I’m very impressed with the changes they’ve made.”

Caroline herself grew amidst a large family. She is the sixth of seven children. That camaraderie and love that she blossomed under is what she envisions for every child in the world. “I’ve been blessed with a life full of love. I grew up in a large family, with lots of brothers and sisters, and loving parents. My parents instilled in me the values of equality and empathy,” says graduate of Harvard University’s John F. Kennedy School of Government, who reveals that she is happily married to the man of her dreams, and has two step-children and two grandchildren!  When not travelling for Miracle Foundation, the New Yorker has a packed day, “On a typical day, I wake up at 6 am, meditate for 15 minutes, work out, and start work. My husband Ed and I love to cook and work out together. We love live music, playing games, reading and our time in New York City,” adds the lady who appeared in a film called One Peace at a Time (2009) with her friend Turk Pipkin, a co-founder of The Nobility Project, where she travelled to India to give children a voice.

Learning is a constant, and the children are her utmost priority, and she concludes, “I have changed. Today, I have everything that money can’t buy: Peace, contentment, fulfilment, and purpose. I’ve learned that when the have’s help the have not’s, miracles happen. The most important lessons I’ve learned I didn’t learn in a classroom, but in the real world. Trust your gut. Know your strengths and hire the right people to fill in your weaknesses.”