The day April 8 2016 was a milestone in the history of the much-revered Shani Shingnapur Temple in Maharashtra. For the first time in 400 years, female devotees entered its inner sanctum sanctorum and offered prayers to Lord Shani. The landmark move came about after the Bombay High Court earlier this month, backed a woman’s right to enter the temple. While Trupti Desai, president of the NGO Bhumata Ranragini Brigade may have become the more prominent face of the battle, it was Pune-based public prosecutor Nilima Vartak who launched a legal campaign against what she felt was a  ‘blatant discrimination against women’.

Nilima is happy about the High Court’s observation, but it isn’t exactly a ‘victory’ in the conventional sense, she reminds us. “There was a law in existence and constitutional provisions were always there,” she says referring to the Maharashtra Hindu Place of Worship Act, 1956. “Despite that, there is discrimination going on in the country. It wasn’t a petition against any particular temple or place of worship. We asked for general directions to implement the law that was already in existence. Now, the court has given a verdict and asked the state government to take steps and give protection to all those ladies who want to perform their religious rights,” she says.

Nilima admittedly has mixed feelings about the second part of the victory as well, “It is certainly a positive development that women entered the inner sanctum, there is no doubt about it. But, I would’ve been happier if some more pro-active action came from the government officials rather than the villagers and trustees. Having said that, it’s good news nevertheless.” 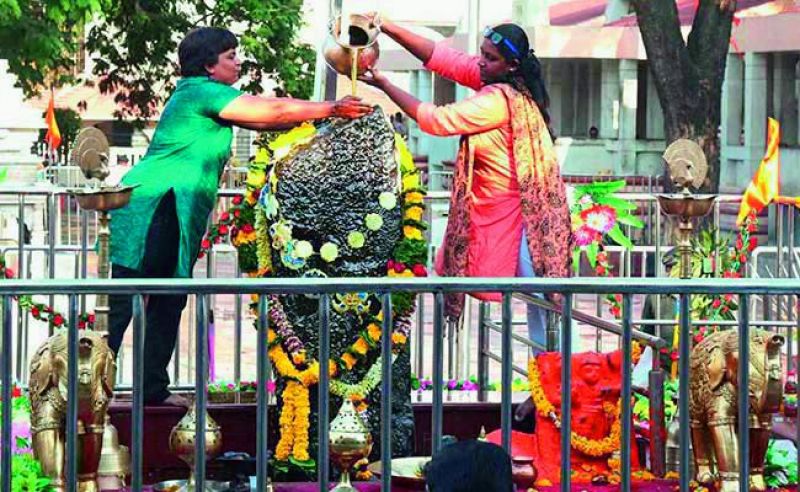 The Shani Shingnapur incident is known to have roused a rare agitation that saw multiple aggressive clashes between female devotees and government authorities. And while it was a social movement on the basic level, it had a serious religious outlining as well. Most women who fought blows of the police outside the temple premises were self-confessed Shani-bhakts. Nilima however isn’t on the same page.

“I follow a certain religious philosophy too, but that is within the confines of my house. I do not believe in publicly professing my religious beliefs. The reason I stood up for this cause is because I saw it as suppression of women. The system was pitting women against other women and no religion propagates that,” she explains.

While the laws are firmly in place to fight any prejudice against female devotees in temples, the bigger challenge is to overcome social obstacles, Nilima observes, “Certain beliefs are deep-rooted in our society. But that doesn’t mean that we don’t fight them. Raja Ram Mohan Roy had to fight much opposition when he tried to abolish Sati. It’s part of the challenge. When I filed the PIL, there were ‘religious heads’ or ‘fake’ religious heads as I call them, who said that I was going against society and religion. It is natural for public opinion to shape a certain way when you challenge social norms — sometimes it may work against you — but like I said, that’s no reason to bow down.”

Does that mean the battle will trickle to other places of worship such a Haji Ali or Sabrimala where women are not allowed inside the sanctorum? Referring to a technicality, she explains, “The Bombay High Court’s observation refers to the Maharashtra Hindu Place of Worship Act, so that leaves out Haji Ali and Sabrimala for religious and geographical reasons, respectively. Having said that, the Constitution has similar provisions for all and I’ll be happy to lend my voice if my help is sought.”