Dr A. Seema with her team

For Dr A. Seema, a scientist at the Centre for Materials for Electronics Technology (C-MET), Kerala, it is a proud moment. A wearable device to detect breast cancer developed by her team has been honoured with the Nari Shakti Puraskar, India’s highest civilian award for recognising the achievements and contributions of women, and the National Award for Women’s Development (NAWD) instituted by the Department of Science and Technology (DST). An elated Seema, who spearheaded the project, says, “We didn’t expect the award. But, we are extremely happy to see that the nation recognised it.” 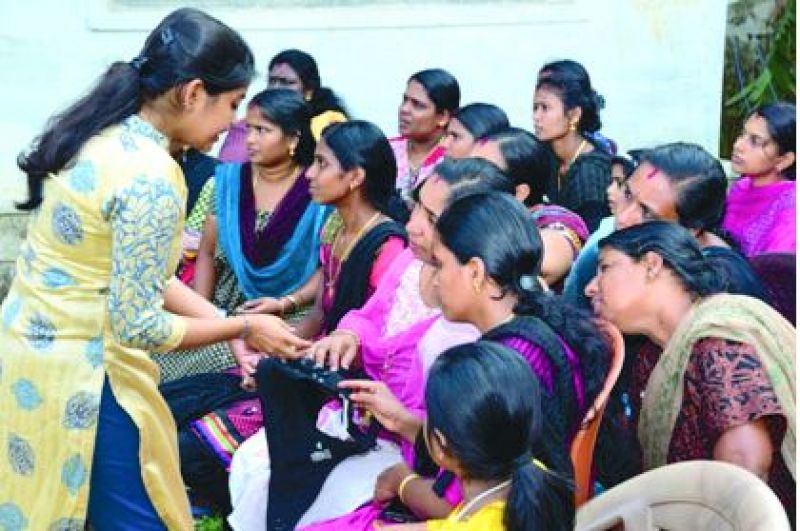 1. A volunteer introduces the device

This affordable device that resembles a sports bra is created with an intention to make breast cancer detection test accessible to all as existing methods like mammogram are quite costly and not advised for women below 40 due to radiation. “Also, mammogram requires the presence of a radiologist. In our case, anyone can do this. Also, it is a portable device,” says Seema.

They are planning to introduce the device at the community level, which means there is no need for each woman to own one. A community has to purchase all sizes of the device so that anyone in that particular community can use it. “For instance, an ASHA worker can bring it to a group and those who want to test can go for it. One has to wear the device for 15 to 30 minutes. Our breasts have a thermal profile pattern. The thermal sensors embedded in the device will map the temperature of the breasts’ surface and generate a 2D thermal image of them with colour coding for different temperatures. Abnormalities can be found out based on the colour variation in thermal image. If there is any abnormality, they can go for further checkup,” she explains the project that was started in 2014. It got completed in 2018, and in 2019, C-MET gave it to an Indian company to introduce it in the market.

“The awards have been given considering the wearable device. However, this device is an application of thermal sensors we developed using indigenous technologies. The sensors’ resistance will change according to the temperature,” says Seema.

The idea of wearable device occurred to them when the Malabar Cancer Centre (MCC), an autonomous centre under the government of Kerala located in Thalassery, approached C-MET to discuss developing a method for early detection and screening of breast cancer. “It is because, in India, breast cancer tops the list,” says Seema. “They asked  us whether we could develop an affordable and a portable device. And, we decided to apply the thermal sensors that ensures maximum accuracy in documenting temperature. Cancer tissues have high metabolic rates than normal ones. So, the temperature will be different.”

The process of making the device and popularising it among laymen was not a cakewalk. Seema gives credit for the device’s success to her team that spent days and nights deciphering the concept and analysts at MCC who supported each stage of experiment. “In the journey of a researcher, the number of failures will be more than that of success,” she says. “It’s only after confronting a lot of failures that we reap success. Challenges always await us. In the wearable device’s case, one such aspect was the design. The device should cover the entire surface of the breast, and we brainstormed hard to zero in on that, because each body is different. Even our left and right breasts are different in size.  The body temperature varies with time and physical condition. For example, our temperature will be different during menstruation. So, decoding a temperature pattern had been a herculean task for our team. They spent almost two days to make a thermal pattern,” recalls Seema. The team conducted studies among women betw
een the ages of 20 and 70, and prepared the device in different sizes like innerwear. “For an ordinary woman, it will only feel like wearing a sports bra. The sensors embedded in it will do the work,” Seema elucidates.

The biggest challenge was to convince people, says Seema. “That was a task! It was difficult in the beginning. Mostly, people are always afraid of trying new devices. But, once they got convinced, they recommended it to others.”

A native of Kozhikode, Seema ventured into the world of research after completing MTech and PhD in science and technology. “Science has always been my favourite subject. I joined C-MET after completing my studies and has been there since then.”

What she enjoys about her journey is the fact that it benefits society. All her experiments are her effort to giving back to society. “It is a government organisation where we develop electronic materials using indigenous elements. It is a big task to procure elements. We do all experiments using public money. Hence, it is our responsibility to do inventions that benefit people. Earlier, we had developed an emergency lamp that could be recharged within a minute,” says Seema.

Besides other projects, her team is currently working on bringing out a system to create 3D thermal image  that could measure depth and size of the thermal pattern.