A woman of substance

She is the first Indian-American Congress-woman who will serve in the House of Representatives. “In 2016, I decided to run for the open seat in the 7th Congressional District which includes most of Seattle and Washington, and I am so honoured to have won that race decisively,” says Chennai-born-Malayalee, Pramila Jayapal, who takes oath on January 4. Pramila never intended to become an elected official. She turned political after 9/11, when she saw the hate crimes against Muslims and people of colour rising rapidly. “I brought members of the community together to declare Washington State a hate-free zone and take on civil liberties abuses and profiling by the Bush Administration. That fledgling effort turned into my founding an organisation, then called Hate Free Zone Washington and now called OneAmerica. Today, it is the largest immigrant advocacy organisation in the state. Together, we successfully sued the Bush Administration and stopped the deportations of over 4,000 Somali Muslims, organised thousands across Washington State for immigration reform, registered over 23,000 New American citizens to vote in the state’s largest voter registration drive in history and advanced the work of immigrant integration and immigration reform at the state and federal level.” 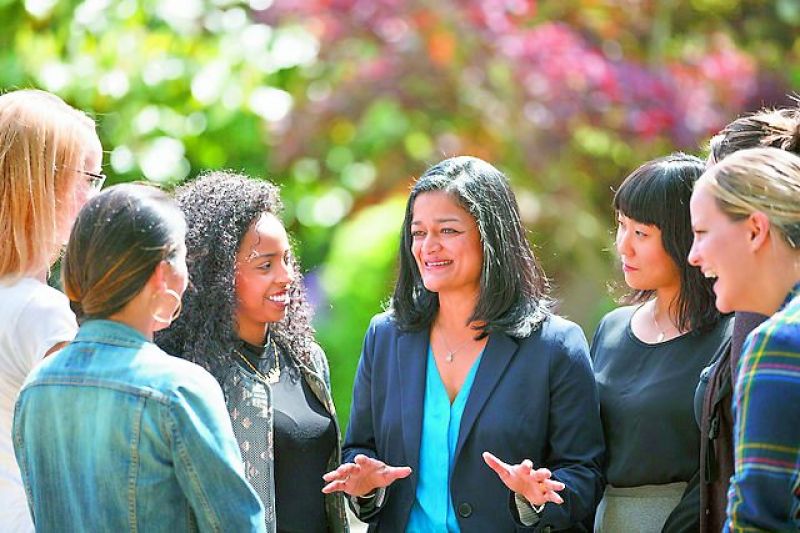 People’s woman: Pramila Jayapal, centre, has fought for the rights of minorities in the US

After 15 years of working on the outside and trying to get elected officials to do what she felt was right, Jayapal decided to run for the Washington State Senate when a seat opened in the 37th Legislative District, where she lives. Jaypal was elected to serve as the Senator from Washington’s most racially and economically diverse district. “I was the only woman of colour to serve in the State Senate and the first South Asian American ever elected to the state legislature.  Hopefully, I will not be the last,” says Pramila, whose parents — writer mother Maya Jayapal and father M.P. Jayapal — used all the money they had to send her to the United States, because they thought that she would have the greatest opportunity there.   “Our primary role will be to oppose a number of things that President-elect Trump and the Republicans have said they want to do, such as limiting a woman’s right to make choices about her own body; rolling back the Affordable Care Act which finally insured so many millions of people who were without insurance before; or privatising medicare.  These would all be disastrous for our country,” says Pramila, who loves being with her family and her dog. She makes time for walks with her husband and tries to meditate, even if it is for short periods.

Is she comfortable working with President Donald Trump? She states categorically, “It depends on what he is trying to do. Unfortunately, his cabinet appointments do not give me faith that he will uphold fundamental American constitutional values or fight for inclusion of all people. If he wants to provide economic opportunity to everyone, provide affordable college for youth, or structure a real transportation infrastructure package without putting the burden on working people, then I would be happy to work with him. If he tries to deport immigrants, register Muslims, limit voting rights or incarcerate black and brown people, I will fight him every step of the way. We need to move forward as a country, not roll back decades of progress on civil rights issues.”

Born in Chennai, but her family is from Kerala. She attended school in Indonesia and came to the US to attend Georgetown University. She then went on to get a degree in English Literature, worked on Wall Street and got an MBA from the Kellogg School at Northwestern University.

Pramila lives in Seattle with her husband Steve Williamson and their dog Otis, while their son Janak visits home when he is on break from Wesleyan University. Pramila’s step-son, Michael, lives in Colorado.