Man who stared at death and won

It takes the courage of a colossus to stand tall even when death stares you in the face. But, for Poonam Chand Solanki, bending was never an option. It is no wonder then that among the Ram Jethmalanis and Salman Khursheeds of this world, this simple lawyer from Rajasthan is the toast of India today. He’s the David that brought down a Goliath like Asaram Bapu, ensuring that the self-styled godman spends the rest of his living days in jail. Offered crores, and then threatened with death to get him to back off from the case, Poonam Chand did not once waver from his resolve to ensure justice for the 16-year-old girl who had been raped by the godman in his Ashram in Manai.

Getting justice
This is Solanki’s most high-profile case in his two-decade long career as a lawyer. He said the girl and her father had approached him in 2014 as they were unhappy with the initial progress in the case. “They requested me to take on the case but said they did not have any money to pay my fee. That did not matter to me at all. After hearing them out, I became determined to get justice,” said the 45-year-old lawyer. Getting justice for the child consumed Poonam Chand. “Fighting cases is my livelihood but there comes a time in life when a cause becomes more important than need. I fought this case for justice and truth,” said Solanki.

Starting young
The only son among four children of a former railway mechanic, Poonam Chand says his family is darzi (tailor) by caste. And, despite the family’s abject poverty, his parents ensured that all the children got a good education. “I was enrolled in the central school, which was not easy in those days,” he claimed. After he joined the bar in 1996, his first big moment came in 2002.  He had filed a PIL against the immersion of Ganesh idols made of Plaster of Paris in Gulab Sagar near the historic Ghantaghar, after he saw thousands of fishes dying in the polluted water. The high court imposed a ban on the immersion of idols in the lake. At the time, Solanki had received threats from the Shiv Sena and other Hindu outfits.

‘Was never afraid’
Was he not afraid of the death threats? “Not even for a moment. My family, especially my parents, have always stood rock solid behind me. Even in Asaram’s case, there were threats, but my father told me to finish what I had set out to do,” said Poonam Chand. To get the scale of the danger Poonam Chand was up against consider this: nine key prosecution witnesses were attacked and three were shot dead while one has been missing after being stabbed outside the court. Everyone who stood against Asaram – victim, investigating police officers, prosecution lawyers or judges – received threats.

30 different lawyers
Poonam Chand’s nerves of steel did not bend once while arguing against bail petitions by Asaram who tried 30 different lawyers including Ram Jethmalani, Salman Khursheed, Subramanian Swamy, and KTS Tulsi for his defence.  For this, he gives all credit to former chief justice of Jharkhand High Court Bhagwati Prasad Sharma, who passed away last year, and whom he considers his guru. “I worked hard because there is no alternative to it and my guru’s advice has always stayed with me. He used to say, ‘kanoon toh yahi hai na’,” Solanki said. What Bhagwati Prasad Sharma had meant was that no one can go beyond what is established in the law. 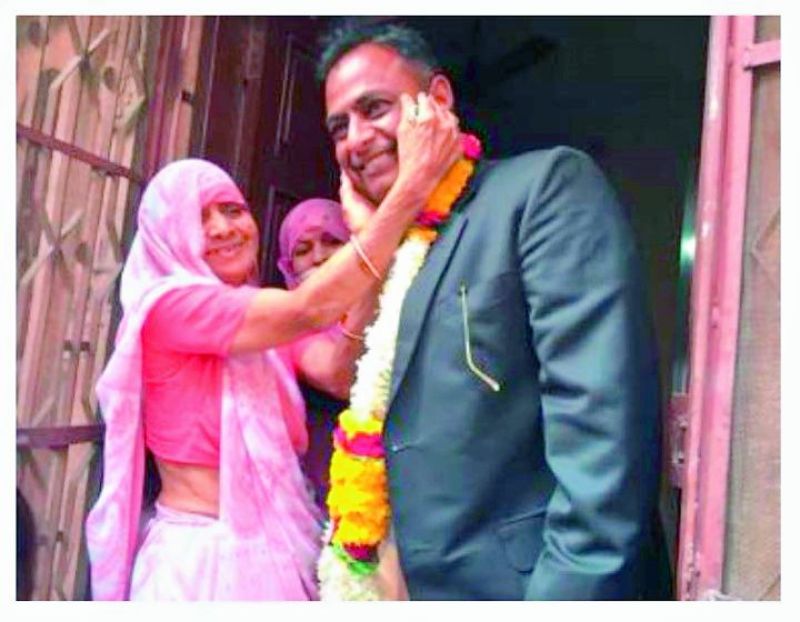 Well done son: Aichuki Devi, mother of Poonam Chand Solanki greets him on his return from the court after winning the Asaram case.

Bring down Goliaths
Poonam Chand has innumerable anecdotes to share from each of his courtroom encounters with these eminent lawyers in the case. He recalled how Jethmalani retreated when Poonam Chand pointed him to section 27 of the POCSO ACT. “Jethmalani had objected to the rape victim’s medical examination before the FIR was registered. I told him that either he had not gone through the POCSO Act or had overlooked section 27. After reading it, he was lost for words.” Solanki said.  Jethmalani was followed by Subramanian Swamy, who though not a lawyer, was allowed by the SC and HC to argue cases in court. He had tried to throw his weight around claiming that he had unearthed many scams and toppled several governments. He was stopped in his tracks by Solanki who cited the HS Rastogi case. Taken aback, as he did not expect this from a lawyer in a lower court, Swamy retorted, “Do you know about that case?”

“I told him that as per the SC ruling in that case, Asaram had not informed the court that Swamy would be pleading his bail application. What if the court rejected the bail application and Asaram claimed the next day that he had not authorised Swamy to argue his bail petition?” Poonam Chand said, leaving Swamy stunned.  Asaram was immediately brought from jail and an application was submitted to court, which was eventually rejected much to the dismay of Swamy, who had claimed outside court that he had not lost a single bail petition in his life. Swamy never returned to argue the case despite promising Asaram that he would.

Nailing the lies
Solanki mostly argued the case in the trial court but there were times when he had to argue in the high court and Supreme Court as well. On one such occasion, he called the bluff of former union minister Salman Khursheed who, while seeking bail for Asaram, claimed that he was suffering from a serious illness. But, Solanki convinced the court to constitute a medical board to ascertain Asaram’s medical condition. The court agreed and the medical board nailed Asaram’s lie and the bail petition was rejected,” Poonam Chand revealed.

Writer and teacher, too
While not arguing cases, the lawyer loves to write. He has written several law books and is also passionate about teaching. “I love writing and teaching,” he said. Now that the conviction means he has some time on his hands, Poonam Chand is spending it with his family, especially his nine-year-old son. Until another challenging case comes his way, that is.