An enthralled nation lined up canal banks in northern Netherlands two weeks ago, loudly cheering its Olympian swimmer Maarten van der Weijden as he attempted to freestyle 200 kilometres to raise money for cancer research. Maarten was pulled out of the waters 37 kilometres shy of the finishing line of the historic speed skating race, last attempted in 1997. But not before the cancer survivor had raised nearly four-and-a-half million euros, a feat he believes will be impossible to beat. Only 37, but Maarten van der Weijden has lived an inspiring life. From an early age, it was evident Maarten had a promising future as a swimmer. His parents first got him on to it. “My parents thought that getting into sports would be a good preparation for life,” he says.

As it goes with sibling rivalry, he started to love swimming even more, when he realised he was better than his sister! It wasn’t long before he started competing professionally. His future looked bright and he was excelling in his career. Between 1998 and 2000, the rising star became a 12-time Dutch national champion in 1500m freestyle, 400m freestyle, and 5km open water. It almost seemed like nothing could stand in his way as he was making his way towards the touch line. 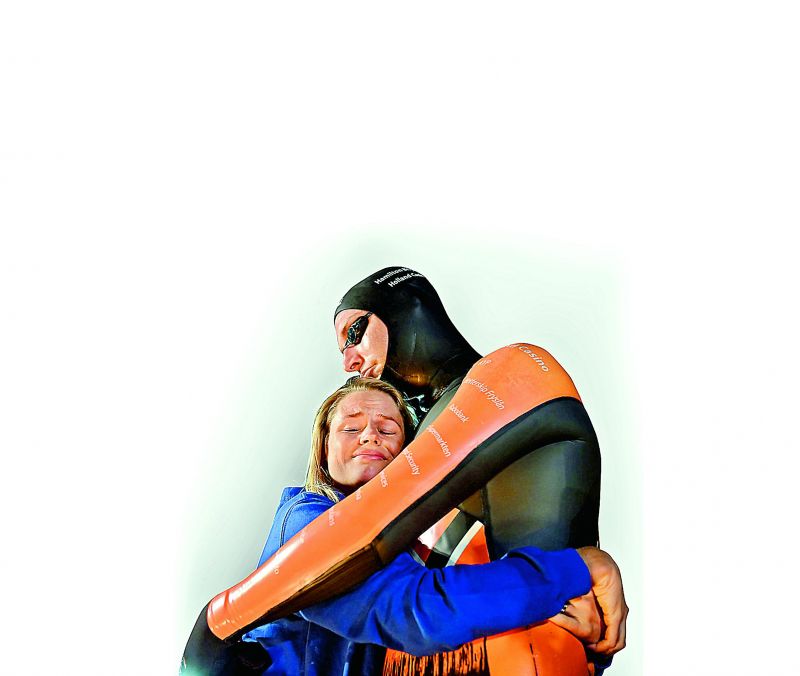 Maarten van der Weijden and his wife, Daisy, at the start of his Elfstedenzwemtocht with which he wanted to raise as much money as possible for cancer research (PHOTO: CASPER VAN AGGELEN)

But his dreams of conquering the swimming world were almost dashed when he was diagnosed with cancer at just the tender age of 19. His condition didn’t look good and chances of him surviving leukaemia looked very slim.  He spent the next few years undergoing chemotherapy and a stem cell transplantation. He tells us, “When I was diagnosed with leukaemia in 2001, I was the laziest patient you could imagine. It was luck that caused me to recover.” Just two years after his diagnosis, Maarten was back in the water as a competitive swimmer. In 2003, he qualified for the FINA Open Water World Championships in Barcelona. In 2004, he swam across Holland’s biggest lake IJsselmeer in 4:20.58 hours, breaking the former record by almost 15 minutes. “But I accepted that I would never be as fast as I was,” Maarten says, reiterating that it was luck that made him win the 10-kilometre open water gold in Beijing, 2008. “Accept there is bad luck too, and realise you have to live your own life,” is what keeps Maarten fired as he negotiates ahead. 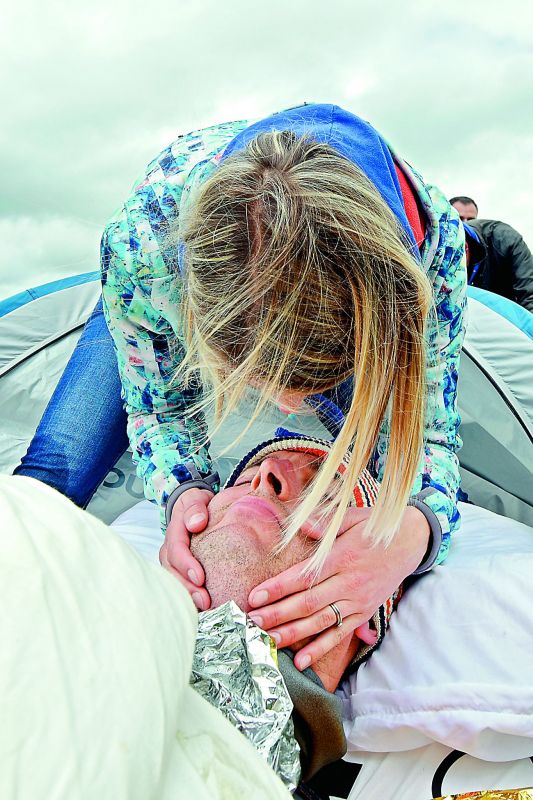 Maarten had to stop on his doctor’s advice after a great 55 hours of swimming and 163 km away. His wife, Daisy, can be seen comforting him.

His last swim, Maarten doubted only once — at 85 kilometres — whether he would be able to finish the 200 kilometres of the interlinked canals and rivers across 11 towns in the northern province of Friesland. Doctors thought it would be irresponsible for him to complete the 200 kilometres and pulled him out after he swam 163. “That was the maximum I could do… the pain… but it was perfect,” Maarten says. It was pollution that pushed him out of the water, a threat that open-water swimmers continue to face. When he was pulled out of the dirty canal, the skin in his hands and feet were wrinkled in a thousand folds. He says, “Clean water is crucial. In Netherlands, long dry periods pollute our waters. If we manage to keep our water clean, a beautiful side effect is that we can happily swim in it.” 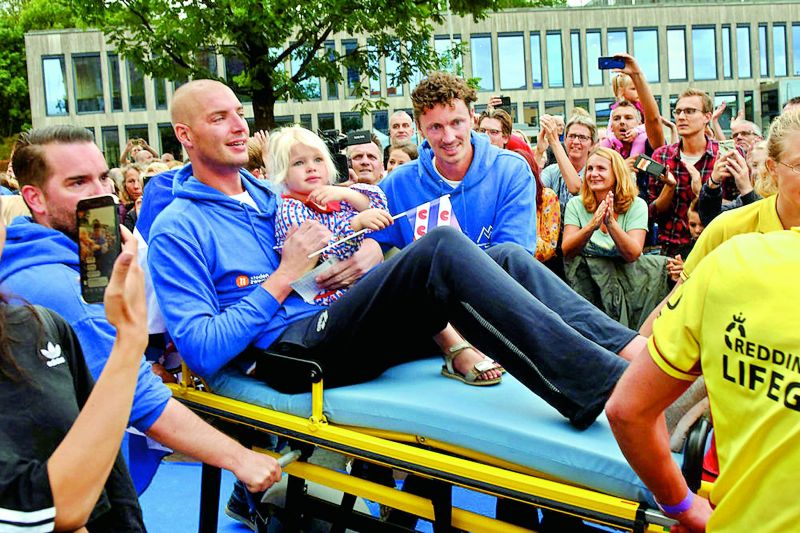 Maarten with his daughter just before the ceremony at the Oldehoofsterkerkhof in Leeuwarden.

In 2008, after he won the gold in Beijing, Maarten gave up professional swimming. But Maarten wasn’t stopping. He wanted to work towards finding a cure for cancer. “In my country, one out of every three people will be diagnosed with cancer in their lives. This is also true for sports personalities. Cancer doesn’t care if you are a sportsman or not,” he says. Having gone through his own battle with the disease, Maarten wanted to help others. For a decade now, he has used his mastery over the gravity waves to raise money for cancer research. In 2015, he started the charity, ‘Swim to Fight Cancer’. Five hundred swimmers participated in the first event in the channel of Den Bosch. Maarten also swam the Pieter van den Hoogenband Swimming Stadium Eindhoven pool, which has a running marathon distance of 42km. And then came the 200-km race for three days beginning this August 25 that kept the nation captivated, a race that was live streamed too by national broadcaster NOS.

The swimmer was encouraged by everyone. His supporters came to every bridge that the swimmer crossed.

During the 55 hours he swam over the next three days, Maarten was allowed to take short breaks for naps. His body gave way to the imbalance in salt. But his resolve was strong. “I was not looking forward, only felt happy I could swim 163km,” he said. What’s next for the man who likes a challenge for the right reason and has relentless endurance to fight cancer? Only time will tell!