A taste of the coast

Mangalorean cuisine is a celebration of different communities coming together. The communities that are a part of this lesser known, but still fascinating, regional fare aren’t restricted to just Udupi. Mangalorean communities like that of the Tuluvas, Rajapur Saraswat Brahmins, Goud Saraswat Brahmins, Mangalorean Catholics, and the Bearys also bring with them a rich food heritage. This fare brings with it the nuances, styles and ingredients that retain their distinctiveness, while also coming together to collectively be known as Mangalorean food.  Although it remains largely influenced by South Indian cuisine, Mangalorean cuisine retains its identity. Ingredients like coconut and curry leaves are common ingredients to most Mangalorean curry, as are ginger, garlic and chilli.

Mangalorean recipes are quite spicy and fresh coconut is an integral part of these recipes. The use of grated coconut in almost every dish is a pretty common Mangalorean trait, as also is the use of chilli, usually of the Byadgi variety. Of the better known dishes, the most common ones are Tuluva dishes, which include neer dosa, masala dosa, chicken ghee roast, chicken sukka, kori rotti, boothai gasi, kadubu and katrode. The Konkani community’s specialities include daali thoy, bibbe-upkari, val val, avnas ambe sasam, Kadgi chakko, paagila podi and chane gashi.

There isn’t a particular cooking method employed by Mangaloreans, as with every community, the dishes will vary. Although they may use the same ingredients or even follow the same process, the final result is almost always uniquely nuanced. Adapted from the Konkani favourite aluvadi, the Mangalorean version, known as pathrade or pathrode, is traditionally prepared during the monsoon season. Made of colocasia (arbi) leaves, rice batter and spices, the pathrade  is usually steamed before it is cooked in a coconut-based curry or smeared with masala paste and shallow fried.

Even within the Mangaloreans, the process of making patrade differs extensively. While the Hindus wrap the leaves around the batter, the Catholics shred the colocasia leaves and mix it with the rice batter and then steam it in leaf packets.
The food traditionally made by the Bunts are commercially more popular, largely due to the fact that the community has had an impactful presence in the restaurant business for a few decades. They have been the ones to introduce the masses to dishes that are now favourites, which include masala dosa.  Although the vegetarian cuisine in Mangalore — also known as Udupi cuisine — is well-known and liked throughout the state and country, fish forms the staple diet for most, as Mangalore is a coastal town.

Rice, cooked in its various forms, remains the staple food of the Mangaloreans with fish coming in a close second. The use of fruits is quite common in Mangalorean cooking and even desserts are made with palm jaggery, sugar being used rarely, if ever. It would be safe to say that Mangalorean cuisine isn’t going anywhere. But the next time you opt for this cuisine, I suggest you opt for the lesser known dish rather than your staple Udipi dishes.

METHOD
Marinate chicken in curd, turmeric powder, lemon juice and half a tsp of salt for two to three hours, or overnight in the refrigerator.
Dry roast the red chillies on low flame for two minutes. Do not burn them. Remove from fire and keep aside. In the same pan, add a tsp of ghee and roast fenugreek seeds, cumin seeds, coriander seeds, cloves and peppercorns on low flame for three minutes. Remove from fire and cool.
Grind the roasted red chillies and spices along with garlic and tamarind to a fine paste. Keep aside.
Heat 2 1/2 tbsp ghee in a heavy bottomed vessel, place the marinated pieces along with the marinade and cook for 20-22 minutes, or till its three-fourth cooked.
Remove the sauteed chicken pieces and keep aside. Remove the remaining liquid into another bowl.
In the same vessel, add the remaining ghee, and add the ground paste. Saute on low to medium flame for 8-9 minutes till the ghee separates.
Add the chicken pieces and mix well. Add the leftover liquid (while cooking chicken) and jaggery and cook on medium flame for 4 minutes. Add salt to taste and mix.
Reduce flame, place lid and keep it on till the chicken is cooked and you have a thick coating of the masala to the chicken pieces. This is not a curry, it’s a roast dish.
Remove lid, roast the chicken for two to three minutes. Turn off flame, remove into a serving bowl.
Garnish with curry leaves and serve with ghee rice, any flavoured rice of your choice or white rice. 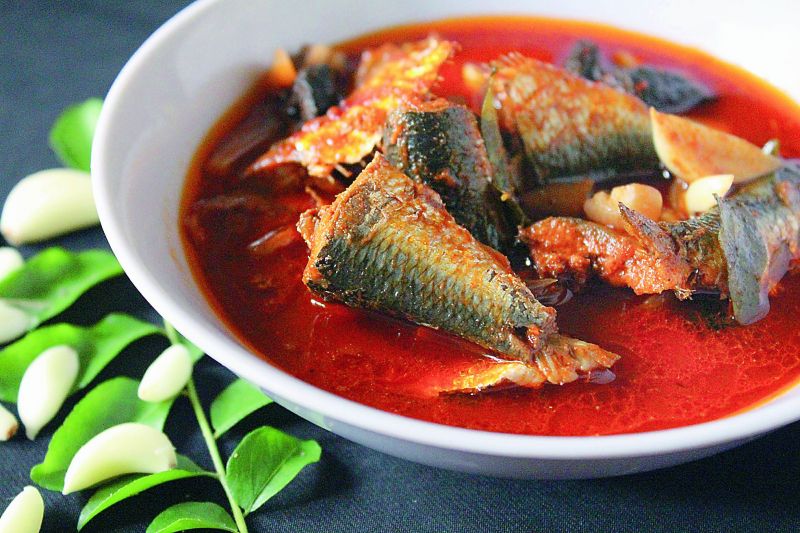 Method:
Clean the baby surmai. Wash with water, salt and turmeric, refresh in a couple of changes of water and keep on a colander to drain off excess water. Depending on the size of the fish, you can either leave them whole or cut them into 2-3 pieces.
Grind all the ingredients mentioned under ‘For the masala’ to a fine paste. Transfer the masala into a kadhai. Rinse the mixer grinder jar with some water (about 1/4 cup) and add this water also to the masala. Let the gravy be of medium thickness, so add another 1/4 cup of water or less to adjust the consistency.
Bring the gravy to a boil and reduce the heat to a simmer. Add the fish pieces and salt to taste and lightly shake the pan (swirl it around) so that all the pieces are covered with the gravy. Cover the pan and let the fish cook for a couple of minutes. Remove from heat.
In a smaller pan meant for seasoning, heat the oil and toss in the curry leaves. Let them sizzle for a few seconds before adding this tempering to the fish curry.

Narayan Poojari is the owner of  Fish N Bait, Mumbai