The perennial debate between the Hyderabadis and Awadhis on which version is better is rivalled only by each region having its own take. In Maharashtra, biryanis are deeply influenced by the Gujarati Muslim communities like Khojas, Bohras and the Memons who settled in Mumbai with their cuisines which date back to Mughal Empire. And each community has a unique way of cooking. For instance, curd and potatoes play a very important part in Bohri biryani. “A typical Bohri biryani is placed under 'dum' for at least 30 mins. This cooks the meat to perfection and ensures the flavours are distributed evenly,” says Nafisa Kapadia of The Bohri Kitchen. Here are a few versions of Maharastrian biryanis.

Cutchi Memoni Biryani:
What sets this biryani apart from others is the minimal use of oil and spices. “We use a lot of saffron and is cooked in such a way that the masala doesn’t drench the rice, which also makes it non-greasy. The meat should be for 24 hours,” says Faiziya Soomar of Cutchi Memoni Table who has been making this dish for 25 years. 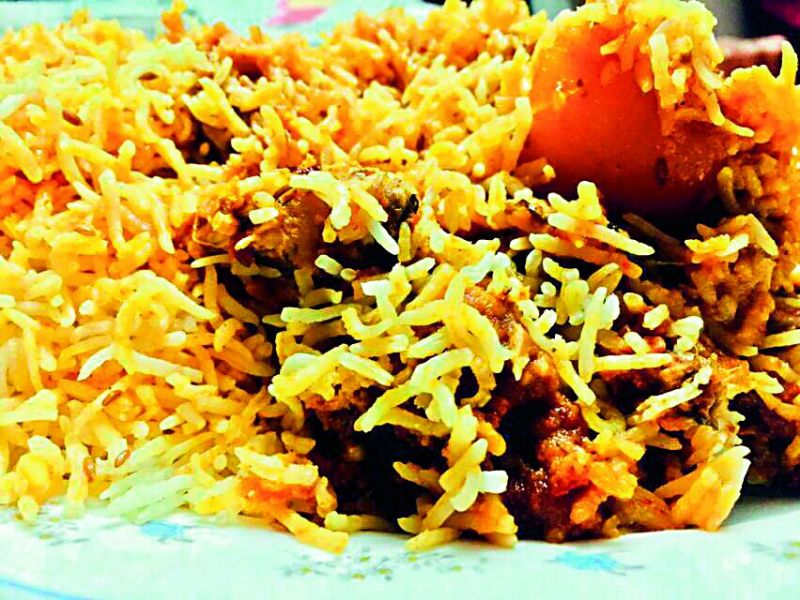 Method:
Marinate mutton overnight with half the ginger garlic paste, chilly powder, salt and half the quantity of the curd. In a big vessel, heat the ghee, add the cinnamon, cardamom, cloves and whole pepper and add shredded onion. Fry to golden brown.
Then add mutton and the other half of the ginger garlic paste, turmeric and salt and fry for a while. Add finely chopped tomatoes, chilly powder, remaining curd, mint leaves and potatoes. Cook on slow till the mutton softens. Add lime juice. Remove the ghee floating on top in a separate container.
Par-boil the rice in a big vessel with lots of water and cook till 3/4th done. Layer the rice over the prepared masala. Pour the extracted ghee over the rice. In a mortar and pestle, grind the saffron to a paste with two drops of cold milk. Boil one cup of milk with this saffron paste and pour over the rice.
Close the lid of the vessel, seal it with a wet cloth to prevent the steam from escaping. Place the vessel on a tava and slow cook it for 20 minutes. Keep the lid sealed until serving.

“In a Bohri Biryani the chicken is marinated in curd and the potatoes that soak in all the flavours are more coveted than the chicken pieces themselves,” says Nafisa Kapadia who learnt to cook the dish from her mother and perfected the recipe with inputs from her mother-in-law.

Method:
Marinate the chicken pieces with green masala, haldi, red chilly, dhania, jeera powder, and salt.
Soak garam masala in little water. Then in a heavy bottomed pan, add at least 4-5 tbsp of oil or ghee. Add the soaked garam masala and cover the pan immediately. After a few minutes, add the marinated chicken in the pan and cook on high flame till the chicken is done.
Grind the fried onions, coriander, mint and the curd.  Mix the paste with the chicken. Cut the potatoes same size as the chicken pieces and deep fry them.  Add these with the chicken.
Boil water in a large pan.  Add 3 tbsp salt. Once the water starts boiling add the soaked basmati rice with juice of 1 lemon.  Let the rice boil till it is slightly uncooked.  Remove the rice in a strainer and keep aside.

Konkani Muslim Fish Biryani:
Food blogger Saher Khanzada remembers her visits to her grandmother’s at Murud Janjira who would use freshly caught pomfret to make this fish biryani. “She would sear it for a few minutes with masalas and would let it cook for not more than 20-25 minutes,” she says. 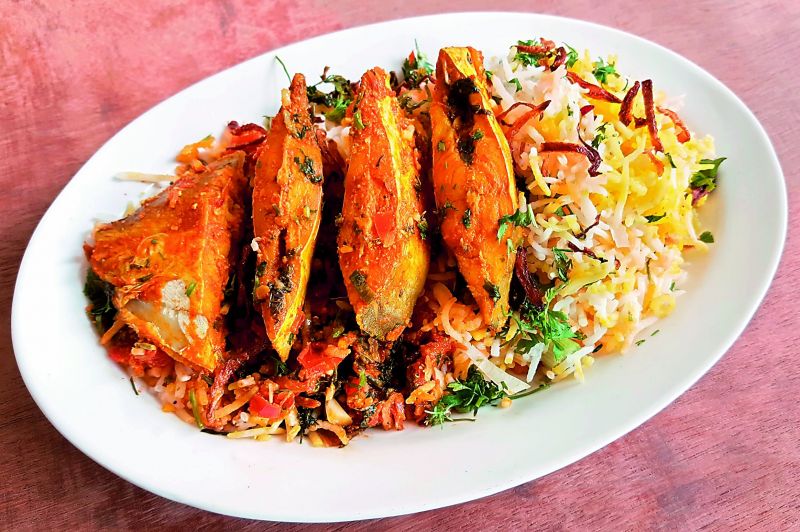 Method:
For the biryani masala, heat the oil in a pan, add all the dry spice powders and fry for 30 seconds. Add the ginger-garlic paste and fry for another 30 seconds. Stir in the tomatoes and turn up the flame to medium heat. Cook until tomatoes soften and masala becomes semi-dry. Add in the curd, salt to the tomato mix and cook for 2 minutes. Keep aside. Rub the fish fillets with the spice paste coating them evenly in it on all sides. Heat oil in a pan on medium heat and fry the fillets for a minute on each side. Boil soaked rice in 4 cups of water with salt, bay leaf, black peppercorns, cloves, green cardamom and cinnamon. Cook until almost done.
Take a deep bottom vessel and line it with half the rice sprinkled with ghee, saffron milk, colour water, birista, spring onion greens, green coriander, mint leaves and lemon juice. Spread half the biryani masala layer on top of this layer and place the fried fish fillets over it. Spread the remaining half of biryani masala over the fish fillets and repeat the process with ghee, saffron milk and other ingredients.
Repeat the process and cover the vessel, seal it with dough and cook on low heat for 20 - 25 minutes. Let it stand for 15 minutes before opening the vessel.