Fragrance of the Deccan

From the time I became a proficient enough cook to begin hosting people, my day has always been punctuated by a call from my husband, announcing that he was bringing guests home for dinner. The numbers can vary from four to forty, or even more. As I prepared the meal, it occurred to me that I had come a long way form the young vegetarian girl who couldn’t cook at all to this woman who was bravely and efficiently preparing an extremely complicated dish such as salim bakra, without batting an eyelid. The truth is that when I started cooking meat, I could not even bring myself to touch it, so I would pay my neighbour’s maid a little money to clean and cut the meat for me.

— Excerpt from the book 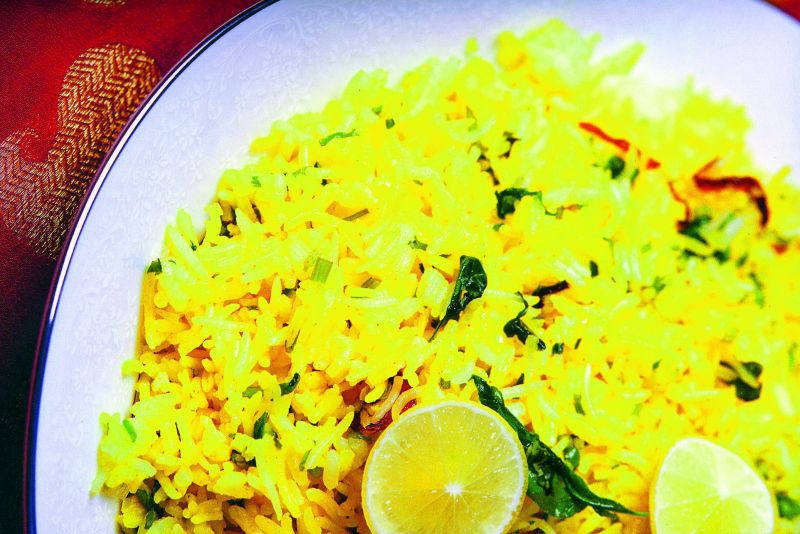 Wash and cook the lentils until tender but firm. Wash rice well and soak in cold water for 30 minutes. Drain and set aside. Heat oil and fry onions until golden brown in a pan large enough to cook the lentils. Remove onto a plate lined with absorbent paper, and set aside. Add ginger-garlic paste to the same oil that you fried onions in, and let cook until fragrant. Then, add chilli powder and turmeric powder and sauté for a while to let the flavours amalgamate. Add the yoghurt and sauté well. Now, add the cooked lentils, chopped coriander leaves, green chillies, mint leaves and lime juice. Cook until the yogurt blends with the lentils.
Put 10 cups of water to boil. When it comes to a rolling boil, add in the drained rice and cook until three-fourth is done.  Grease a large heavy-bottomed pan with a tablespoon of ghee and spoon a layer of rice over the bottom. Spoon the lentil mixture over the rice. Then, sprinkle some fried onions, chopped coriander and mint leaves, two green chillies and cover with more rice. Repeat until you have used all the rice and lentils, and finally pour two tbsp of ghee over the top. Melt saffron in half a glass of milk and sprinkle over the rice. Sprinkle the other half-glass of plain milk too. Seal the pan and cook on high-flame for 15 minutes and then on low flame for 20 minutes. Serve garnished with fried onions and cut coriander and mint leaves.

(Tahari is cooked by     several communities across the country. This Hyderabadi version is lightly spiced and a meal     in itself)

Soak the rice for about 30 minutes in cold water. Drain and set aside. Boil ten cups of water to cook the rice in — cover, and set aside.
Cube potatoes and soak in a dish of salted water.
Heat oil in a pan large enough to cook the rice in. Fry the sliced onions until golden brown. Remove onto a plate lined with absorbent paper, and set aside.
Add ginger-garlic paste to the same oil and sauté until fragrant. To this add cinnamon, cloves, cardamoms, turmeric powder and potatoes. Continue cooking for about three to four minutes
Bring the pan of water back to boil at this point.
Add drained rice to the aromatics and mix well; lower the flame and let everything in the pan amalgamate for three to four minutes. Pour in the boiling water and stir only once. Cover and cook on a low flame until the rice is done.
Serve on a flat platter, garnished with fried onions and finely chopped coriander. 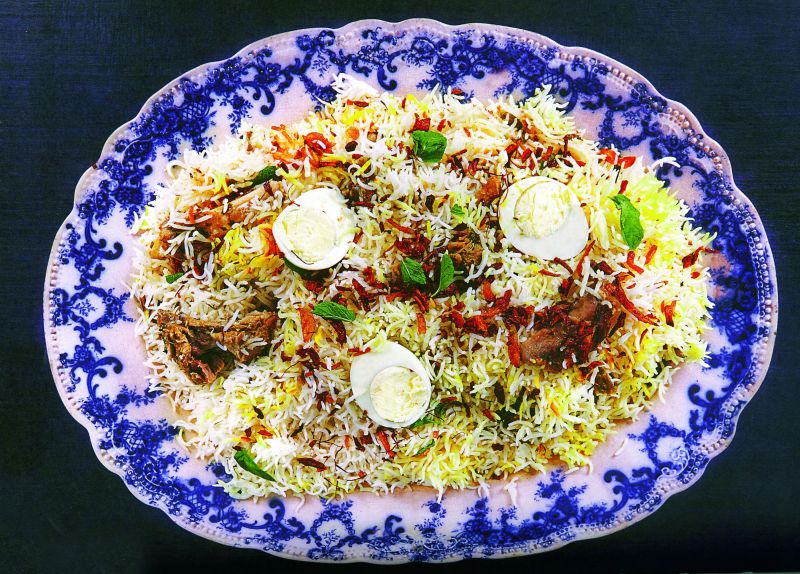 To prepare the mutton
Mix the roasted and ground khus khus with the marinade ingredients and three cinnamon sticks, 10 peppercorns and the black cardamom. Apply this marinade to the meat and leave for at least an hour. Place the mutton in a pan on a slow flame and cook until the meat softens. At that point, take the pan off the flame. If any oil has risen to the surface, drain it off and set it aside.

To cook the rice

Boil water with three cinnamon sticks, three cardamom, six cloves, a heaped teaspoon black cumin seeds and salt to taste. When the water comes to a rolling boil, add rice and cook until three-fourth is done. In a large greased dish, layer half the rice. top it with the cooked mutton. Sprinkle with the remaining black cumin seeds, lime juice, four green chillies and some of the coriander and mint leaves. Cover with the remaining rice. Mix salt in two cups of water and sprinkle over. Mix the saffron in one cup of milk. Sprinkle this, and the oil you drained off the mutton, over the rice. Seal the pan and keep on a low flame. for 15 minutes.  Serve garnished with fried onions, coriander leaves and whole mint leaves.

When you buy the meat, get it cut into medium-sized pieces. Wash the rice and soak for at least 30 minutes in cold water.
Mix meat with ginger-garlic paste, turmeric powder, two teaspoons of salt and yogurt. Set aside for at least an hour. You can leave it to marinate for two to three hours or overnight.
Heat oil in a large pan and fry onions until golden brown. Remove onto a plate lined with absorbent paper, and set aside. To the same oil, add six cardamoms and a teaspoon of black cumin seeds. When these splutter, add the meat and cook until a thick gravy forms. This takes about 30-45 minutes.
Add two tablespoons of chilli powder just as the meat is nearly done, and leave the pan on the stove until the oil rises to the surface. Put 10-12 cups water to the boil, with cloves, cinnamon sticks, six cardamoms and a tsp of black cumin seeds. Once it comes to a rolling boil, add the drained rice to it and cook until three-fourth is done.
Pass the cooked rice through a strainer, making sure you retain the whole spices and about half a glass of water. Do not dry out the rice completely. Grease a pan and layer half the rice on the bottom and then spread a layer of meat. Sprinkle half the fried onions, half the rice on the bottom. Then spread a layer of meat. Sprinkle half fried onions, half of the chopped coriander and mint leaves, green chillies and the juice of three limes. Repeat all three layers.
Cover with the remaining rice and pour all over the oil that you drained off the meat curry.
Mix saffron in milk and sprinkle over the rice. Seal the pan and cook on dum for 15 minutes. Before you serve, use a very large spatula or a small plate to cut through the biryani from top to bottom. This makes it easier for everyone to serve themselves. garnish with the remaining fried onions and coriander.

— Recipes from the book Saffron and Pearls: A memoir of family,friendship and heirloom Hyderabadi recipes