The East Indians — regularly mistaken for Indians living in Eastern India — were the first occupants of Mumbai. The community saw it through a few attacks including the Portuguese and British rule. Named after the British East India Company, the community went up against the name ‘East India’ soon after the British ended their colonial rule in India. They, however, thrived under the British rule. The influence is there for everyone to see, as they blended British cooking styles with their cuisine, which was predominantly Maharashtrian.

Maharashtra has vigorously impacted the community’s culinary scene, which also draws substantial parallels with Goa. The cooking methods employed pottery and clay vessels, and were cooked over wood or coal fires. Similar to Hindu traditions, East Indian cooking rests on a few religious beliefs — fire, ghee, cultivated grain and non-agricultural products are considered essential elements. Water, milk and ghee are considered auspicious and act as purifying elements. Although the community has preserved their pre-Christian Marathi culture and traditions, Portuguese influences, too, have been absorbed.

If there is one thing that has become synonymous with East Indian cooking, it is the bottle masala which is a kitchen staple in East Indian homes. Since the masala was traditionally stored in alcohol bottles, it derived its moniker, bottle masala.  A blend of about 30 spices — including red chillies, cumin, coriander seeds, turmeric, pepper, sesame, shahi jeera, poppy, mustard, saffron, star anise, cloves, cinnamon, cardamom and bay leaves — this recipe is a heavily guarded secret. Each family has its own take on it. The bottle masala, however, doesn’t overpower a dish in the way most different masalas do. One can utilise it with chicken, mutton, fish, shellfish, beans or different vegetables, and it doesn’t leave your palate burning.

This community is known for its foogaths, a side dish where vegetables are fried into batters made with flour, yeast and fermented coconut toddy. Owing to the numerous post-Christmas weddings, their sweetish pulao mixed with dried fruits — aptly called Wedding Rice — is the ideal foil to the spicy Mutton Khudi Curry and the Duck Moile, which is traditionally eaten after Christmas Day. The East Indians even have their own version of the sorpotel, where they use — no prizes for guessing — bottle masala in the recipe.

As a community, they prefer non-vegetarian food and have contributed to the culinary world with dishes such as oxtail soup, sorpotel, boiled tongue, mutton chops, meat ball curry, and beef croquettes while retaining Maharashtrian flavours in the cuisine through an abundant use of coconut, and of course, bottle masala. As is the case with unexplored cuisines, East Indian cuisine too hasn’t travelled across the country. East Indian cooking cannot be standardised as there isn’t one recipe for anything East Indian. This cuisine is a mix of many identities — the kolis or fishermen community, adivasis, farmers and Brahmins among others. All of them pushed for a common identity to differentiate themselves from the Goan Christians. 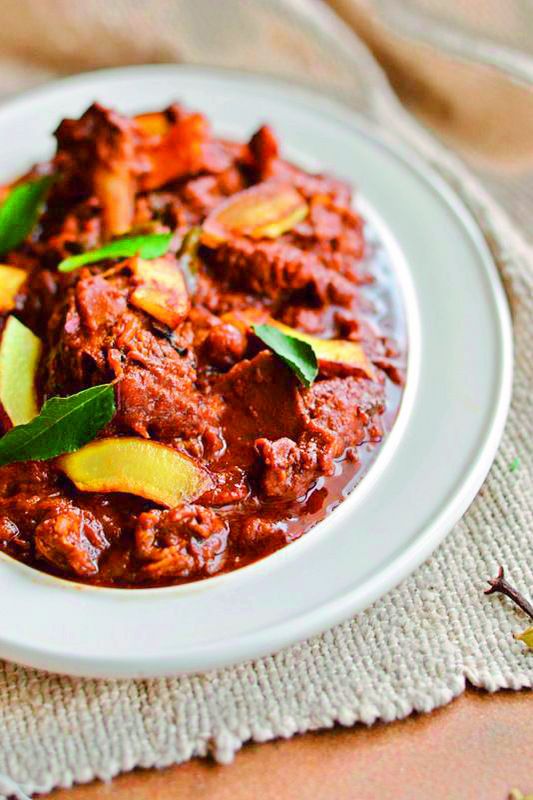 Method
Heat a large pan on medium flame and add the duck pieces. Cook till all the water evaporates.
Now add the ghee and fry the duck pieces till light brown, add the sugar and cook till the caramel coats the meat. Remove the duck and store it aside to cool.
Add the onions, and cook till translucent. Add the ginger, garlic and green chillies and sauté. Lower the flame and add the bottle masala and sauté till the aromas are released.
Add the fried duck pieces, add water to cover them and cook till done on a medium flame.
When the duck is tender, add the vinegar and cook for a few minutes or until you see the oil float on the gravy. Add the garam masala and let it simmer.
Serve hot.

Method
In a hot pan, add 5 tbsp ghee and the sliced onions.
Add the masala and fry. Season it with salt.
Add chicken pieces with 1 cup water and cook for 10 minutes. When the chicken is nearly done, add the potatoes. After the vegetables are done, add tamarind and sour lime juice to taste. Let it simmer for five minutes.
When the meat is fully cooked, add coconut milk.
Simmer for a few minutes, and your chicken curry is ready. 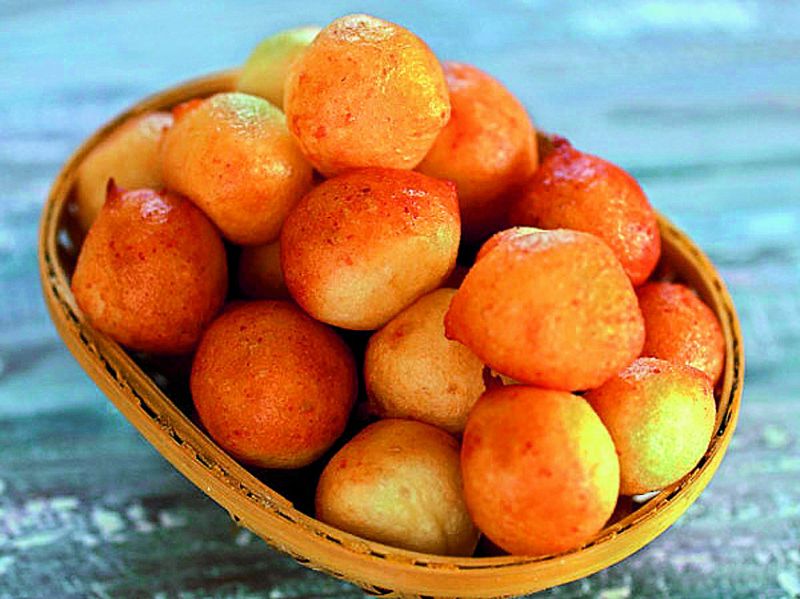 Method
In a large bowl, mix flour, sugar and salt. Dilute the yeast in some water. Pour in beaten eggs, yeast solution and combine well.
Add enough water to make it into a thick batter, which is soft. Keep the batter overnight to rise well.
Pour sufficient oil in a wok and heat it till hot. Form balls by taking dough with the left hand and squeezing it between the thumb and forefinger.
Deep fry on medium heat in batches till the dough is used up.
The dough balls should be uniformly light golden.
Serve hot.

Cut the fish into pieces, wash, salt it and store in the fridge for at least 15 minutes.
Heat oil in a pan. Fry the ginger, chillies, onions and then tomato paste.
Now add the ground paste masala and the masala water. Let it cook for a while.
Now add the coconut milk, salt to taste and finally the fish. Season it with salt.
When the curry comes to a boil, add vinegar.
Serve hot with a bowl of rice. 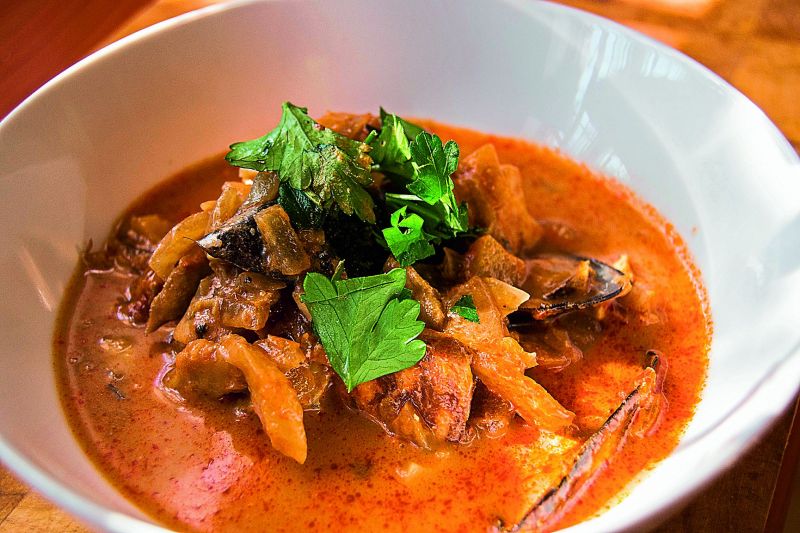 In a vessel, fry the onions in oil until translucent on medium heat.
Add prawns and fry till they curl up. Add the bottle masala and fry for another minute.
Now add the drumsticks, 1/2 cup of water, salt, cook till tender.
Add the coconut milk and cook until the oil separates. Add tamarind paste and mix it well.
Bring to a boil, cover and turn off the heat.
Your prawn lonvas is ready. 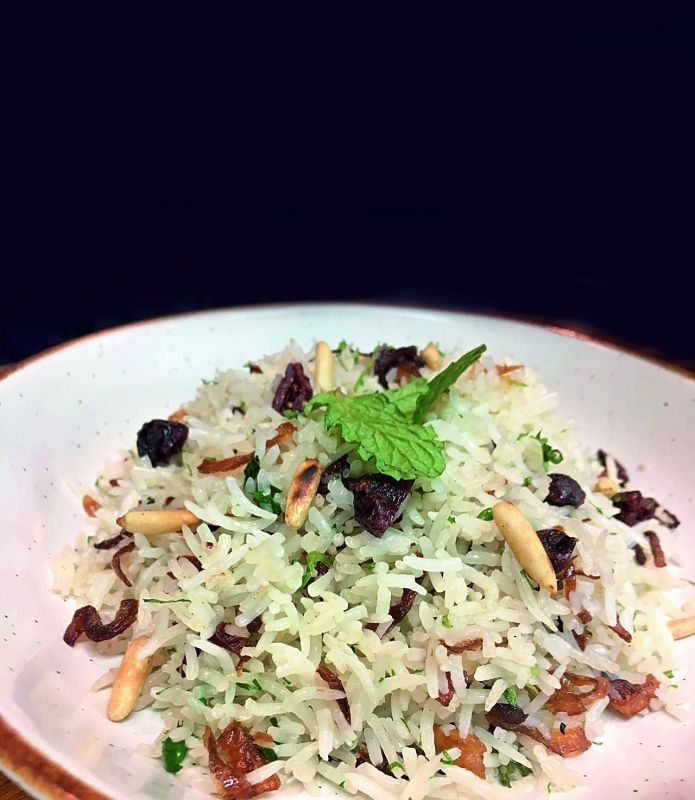 Method
Slice the onions and fry in oil till golden brown.
Remove half the onions and set aside. Fry cashewnuts and pinenuts to golden brown and set aside.
In a pot, add 4 tbsp of ghee. Drain the rice and add it to the remaining half of fried onions and fry for a while.
Season with salt, add a little ghee if required.  Add 10 cloves and 4-inch cinnamon broken into small pieces. To this add water almost double the quantity of rice.
Add salt as required.
Allow to cook till the rice is done.
Place the cooked rice in a flat dish and garnish with the fried onions, cashewnuts, pine nuts, dry cranberry and coriander leaves.