In a packed auditorium in Kolkata, a dance drama is in progress. A young actor takes centre stage and begins performing a few moves of Koodiyattam, followed by rhythmic steps of Kathakali and Bharatanatyam. For the next few minutes, one witnesses physical poetry that attempts to recreate the tragic tale of a modern man’s craving for power, amplified through the sounds of pakhavaj and classical ragas. And while the performance is enthralling the audience, it takes a little imagination to realise that the goings on the stage is an adaptation of William Shakespeare’s renowned play Macbeth, but with an Indian twist. The recently concluded 100th show of veteran theatre director Manish Mitra’s Macbeth Badya, attempts to portray the celebrated work with the help of traditional art forms. “Folk is a very flexible form, and when I decide to perform a certain play or script, I try to look at ways to adapt it in the Indian context while keeping the original aesthetics alive,” says Manish. The dramatist has travelled across 16 counties to stage this play, along with notable works such as Bhasa’s Sanskrit play Urubhangam and Joni, among others. And almost all his plays are an amalgamation of classical and contemporary styles. His plays are inspired from various folk arts of the country, ranging from Koodiyattam of Kerala, Chhau from Bengal and Odisha, Terukkuttu of Tamil Nadu to a folk singing style Pandavani of Chhattisgarh.

West meets east
Across the country, theatre exponents are trying to find newer ways to tell their stories on stage and some of them are going back to their roots to incorporate one or more folk forms in their performances. Theatre directors like Parimal Mistry have transversed across the country to work with various folk artists and realised that there is a lot of material in Indian folk theatre.

Mistry’s plays Behula — based on a famous folktale of Bihar, Kaanch on Shakespeare’s play Othello, and Gatha Bazar, are some of the organic theatre presentations. Similarly, Kerala-based theatre exponent, Chandra Dasan is trying to revive different cultural spaces using Indian and Western classical scripts in his theatre repertory Lokadharmi in Kerala. His plays such as Kali Naadakam, Shakuntalam and The Tempest have been constructed using classical forms of Mohiniattam and Koodiyattam. “My performances are culturally rooted but at the same time, are modern as they don’t lose their aesthetics,” says Dasan who believes that the richness of Indian folk theatre hasn’t been explored well till now. He notes how the Polish theatre director Jerzy Grotowski and his peers had elements of Kathakali and Koodiyattam in their performances. “Westerners were using our forms in their performances and we were trying to adapt from their works and theories,” asserts the director.

Back to the roots
Like every other art form found in India, theatre has also been evolving over the centuries. India has more than 34 forms of folk theatre that go back 5000 years. In the absence of urban theatre in most parts of the country, folk theatre has kept the rural audiences entertained for centuries, reflecting social and political realities of the time.  While folk theatre in the North has a more casual approach and setting, southern folk forms are more technical and deep-rooted. “Even our street theatre has folk elements because it is flexible,” says Rajendra Panchal, who recently bagged an award for his musical play Katha Sukavi Suryamall Ki, which was  constructed using tribal poetry, miniature paintings, and traditional costumes. 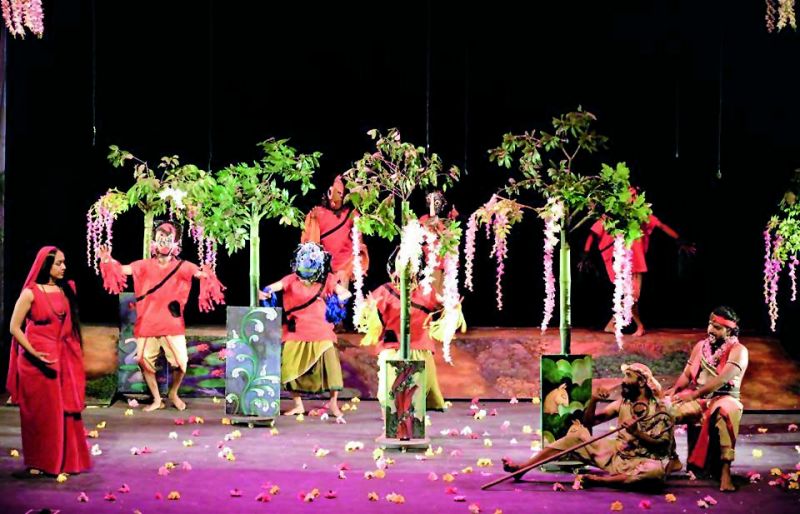 Shakuntalam, the Tale of the Hunt

In the ’60s and ’70s, when veteran theatre practitioner Habib Tanvir started working with the folk artists of Chhattisgarh under his theatre company Naya Theatre, his primary focus was to work with local dialects and music. His plays such as Agra Bazar, Charandas Chor, Mitti Ki Gaadi, among many others have come into existence out of improvisation rather than a formal script. “Theatre is a combination of every art form and my father understood it way back. He would improvise within the diameter of a particular scene, and would weave in dialogues once the script was ready,” says Habib Tanvir’s daughter Nageen, who carried forward Naya Theatre’s legacy after her father’s demise. Even noted dramatists such as Kevalam Narayana Pannikar, Manipuri director Ratan Thiyam and BV Karanth followed his practice of constructing performances with regional folk forms. K.N. Pannikar adapted classic Sanskrit dramas, combining them with Mohiniyattam, and Sopana Sangeetam while Thiyam, through his Chorus Repertory, mastered the art of including local martial art forms and folk dances in his productions. His inclination towards Manipuri Ras Lila and martial art forms such as Thang Ta and Sarit can be seen in many of his earlier plays like Karanabharam and Ritusamharam. Many theatre practitioners maintain that Thiyam’s vision of adapting and designing is as astute as Japanese film director Akira Kurosawa’s in his films. “He not only adapts the scripts but makes them more rooted in his own regional Manipuri culture,” says Panchal. Even noted theatre personality B.V Karanth is credited with making Kannada and Indian theatre vibrant by deriving from different art expressions. He directed over 100 plays in Kannada and Hindi, including Macbeth that used traditional Yakshagana dance-drama form of Karnataka. “All of them have been pioneers who created plays purely based on folk forms. Regional folk forms dominated their plays. They had a very critical eye for folk and cultural values around them. And that’s why they are revered in Indian theatre,” he insists.

But the art forms are slowly vanishing from public consciousness. “The time has changed now. There are no trained actors these days from those areas and it is difficult to work with the new generation which is unaware of their traditions,” Nageen adds. 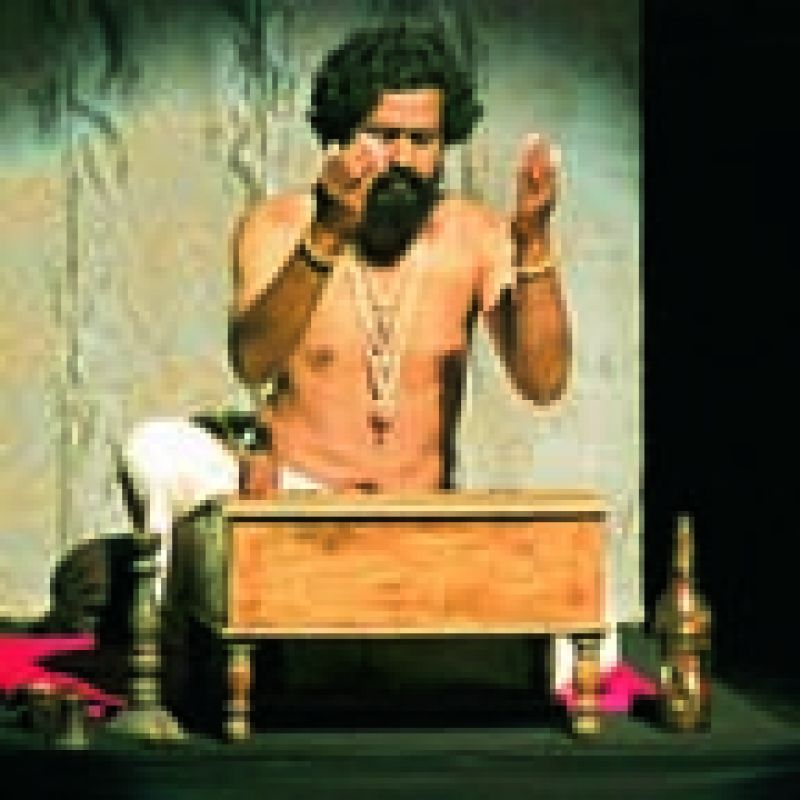 Medley of old and new
As an indigenous form, folk theatre follows no formal barriers of presentation. And according to senior theatre director Roysten Abel, who majorly uses folk elements in his extravagant contemporary performances, the casual approach to performances is what makes folk stand out. “I take up a folk form that inspires me and then I try to make it instinctual. I just try to give a direction to let the form reach the audience. For instance, The Kitchen has performers cooking payasam as 12 drummers armed with mizhavus — a traditional barrel-shaped drum of Kerala — drum up the rhythm while the fragrance of caramelised sugar, cardamom and milk spreads in the auditorium, making it a sensory piece of performance,” says the director, who is known for his elaborated sets and performances. His other piece The Manganiyar Seduction conjures up seductive visuals of Amsterdam’s red-light district with the help of 43 Manganiyar musicians from rural areas of Rajasthan. “I am a contemporary director, and have a certain way of approaching a production. I don’t intend to transport the audience into certain folk era but I need to make it relevant for today’s audiences,” confesses the director. 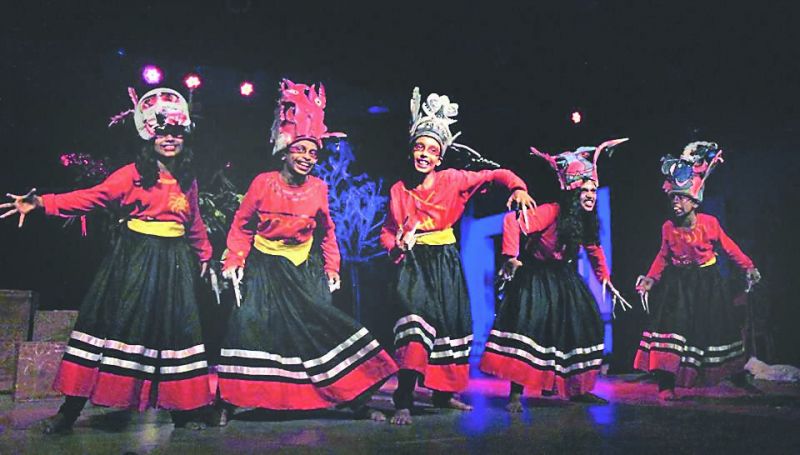 On a lighter note
Across the country, folk theatre has been used as a form of entertainment as the stories would, inherently, have humour in them. Veteran theatre director Sanjay Upadhyay’s 713th show of Bhikari Thakur’s play Bidesiya is constructed in Northern India’s Nautanki format, known for its rich musical compositions and humorous and entertaining storytelling. But what makes Sanjay’s play more interesting is the music. Bidesiya tells a story of a husband and wife’s separation, and the play moves the audience not just with its storyline but with the portrayal of 12 emotions through music as each month goes by. “I combined 12 ragas for 12 different feelings and seasons. This is only possible when you explore different folk forms,” explains Upadhyay. Hailing from Bihar, Upadhyay confesses that the regional folk music has come to him from his mother, and while growing up, he learnt to artfully use music from his father. “Whichever folk song my mother used to sing, my father would modify. He would say it is always good to extend the tradition. If you can’t update the folk form, it would be suicidal,” shares the director. Upadhyay is not only known for his grasp over folk music but is also respected among theatre fraternity for his style of improvisation. “Folk is very flexible and you can experiment with it as much as you can. You can make it classical as well as contemporary,” insists the director. 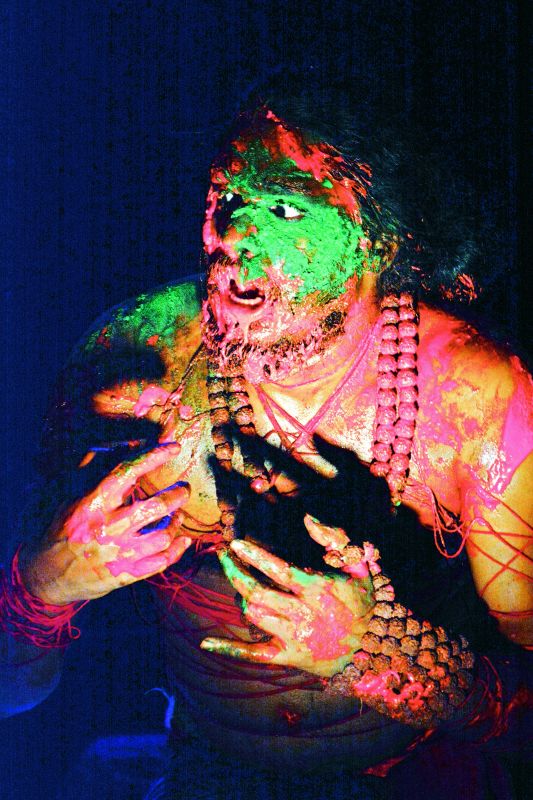 But unlike other North Indian regional forms such as Ramlila, Rasleela, Swang and Khayal, the folk theatre of the South like Terukkuttu, Yakshagana, Mudiyettu and Theyyam, among others do not have the domination of humour in performances. “It is wrong to include folk into comedy. It is a very serious form of presentation,” says Upadhyay and adds, that every folk performance should have mixed elements of social messages as well as entertainment. “Folk has a lot of power. It can make people laugh and cry. We need to have strong content which can move the audience and convey what the director intends to say,” adds the director. He is seconded by Manipur-based theatre director Heisnam Tomba who is of the opinion that the main objective behind the renewal of ancestral traditions is to create awareness about newer kinds of theatre practice. 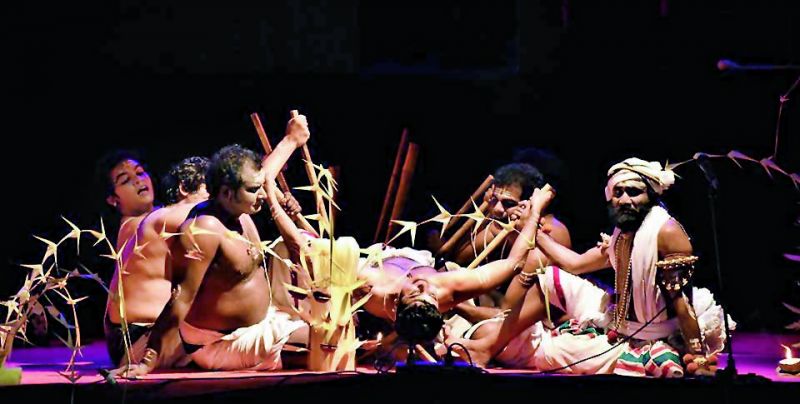 Trailing paradigms
Despite theatre practitioners embracing such stage performances, the country needs many more directors and actors to revive and experiment with local art forms. While South fares better in persevering to keep their folk theatre forms updated and relevant, folk forms of the North are slowly slipping away into the annals of history. The dearth of experiments with regional art forms is pretty much visible when young theatre practitioners are not aware of these folk forms in North. “There is no education about it. We have no culture of teaching traditional theatre in schools. People who are practicing too are changing it at their own convenience. We have forgotten the real values of the forms,” says folk theatre researcher Dr Rajkumar Rajak. The scholar also adds that theatre practitioners are trying to incorporate various folk forms on the basis of a certain character or the script, “Instead, the form should dominate the script. It is like combining two things and that’s wrong.” Atul Yaduvanshi of Swarg Rangmandal in Allahabad, who mainly constructs his performances based on Nautanki, is of the opinion that folk performances are performed in abundance in villages but the city audience is more attracted towards films. “At the same time, folk artists too have detached themselves because city audiences are not very interested in folk performances. So the artists too have decided to confine themselves to villages,” he concludes.