The Temple Raiders of India

The Brihadeshwara Nataraja that was stolen from the Chola temple and sold to the Australian National Museum by smuggler-cum-antique dealer Subhash Kapoor for $5.6 million.

While millions appreciate Indian art and antiques, there are some millionaires who pay a fortune to possess this ‘priceless art’ stolen from India, and sold at auctions and privé pawn parlours abroad. The Chilkur Balaji temple on the outskirts Hyderabad is a mecca for thousands of IT graduates, who flock the temple to pray for visas, in the hope of starting their careers abroad. Small wonders that the temple is also known as ‘Visa Balaji’. However, not many know that that few years ago, the temple was the victim of a heinous crime. On a dark, fateful night, a band of thieves targeted the Chilkur Balaji and broke into its inner sanctum, while its custodians slept nearby. “They came in the middle of the night, broke the locks and stole five idols that had been with us for centuries,” explains C.S. Rangarajan, the Archaka or head priest of the temple. 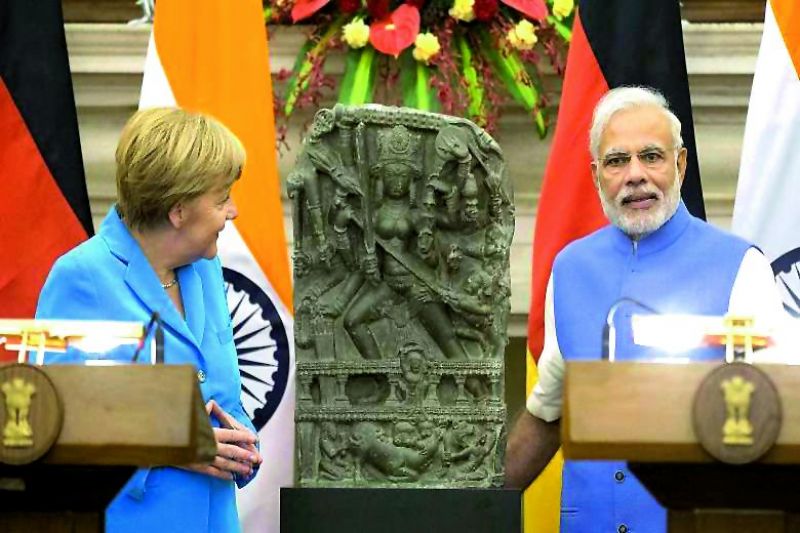 He adds, “The Utsava Murti was also lost, along with other idols that were the collective soul of our temple. We managed to replace some of the deities with new ones, but the loss was a very traumatic one for all of us.”

Another such robbery occurred in Tamil Nadu near the Brihadeshwara Temple complex. These ancient temples were built a millennium ago by Rajaraja Chola. Such was the Brihadeshwara temple’s significance that in 1954 when the Indian Government decided to print its first 1,000 rupee note, it put the façade of the temple on the back of it, signifying India’s culturally rich past. The theft of the famed Nataraja from a Chola temple meant that while it was earlier a place of worship for thousands of devotees, it soon fell into a state of ruin, without a deity for people to pray. 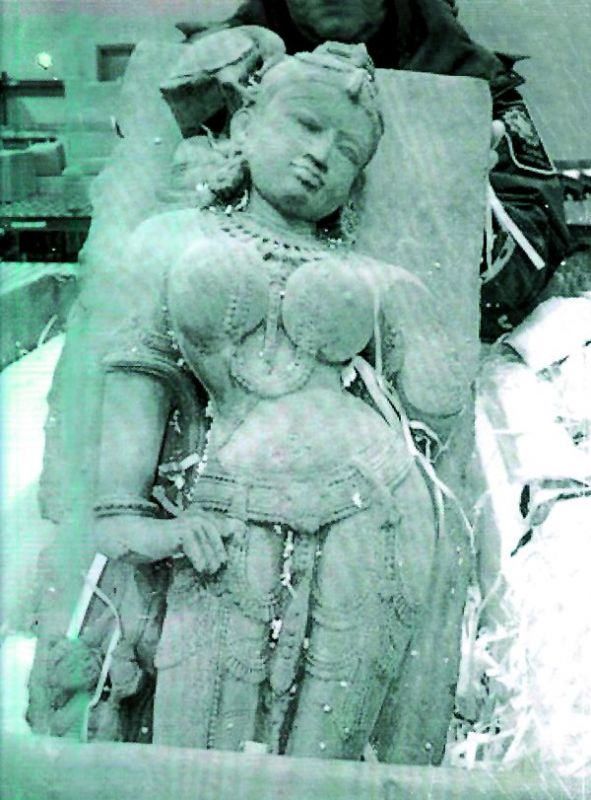 The Parrot lady was stolen and returned to India

For an outsider, the robberies at Chilkur Balaji and the Chola temple might appear to be another unexplained set of occurrences in a legal landscape, overflowing with bizarre events, but to those in the know these were a set of seminal, planned thefts – part of an international smuggling ring that was stealing, collecting and eventually selling the ancient idols to fashionable New Yorkers and Europeans for millions of dollars. 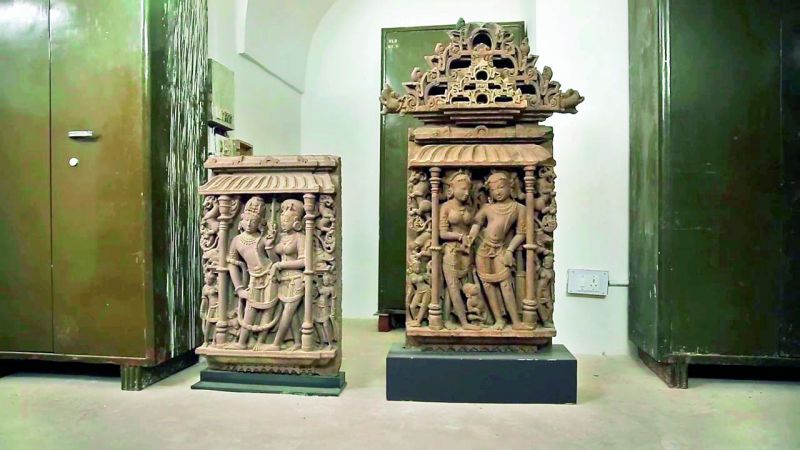 An ancient idol kept on the floor at ASI's storage facility

Over the past few decades India has endured several such thefts across the country, right from Bihar to Orissa, from Kashmir to Rajasthan, from Himachal to Telangana, from Andhra Pradesh to Tamil Nadu and Karnataka. In total, the number of idols lost is estimated to be close to a staggering 50,000. Antique dealers have for decades smuggled such items out of the country to rake in big bucks by selling them to museums or auctioning them at international auction houses like the Christie’s and Sotheby’s. Christie’s famously sold a 13th century Chola Nataraja for US$ 1,035,000. This was just one of the hundreds of stolen items that Christie’s put under the hammer in the recent years.

The practice of collecting Indian ancient statues can be dated back to the British Raj, when our colonizers took back with them several artifacts of historical importance. China too has been a notable victim of this, particularly when the Europeans stole from its famed Summer Palace during the sack of Beijing in 1860.

In its typical fashion, China resorted to strong arming its way to a solution – reportedly hiring professional agents and thieves to bring back many of their stolen antiques from museums across Europe.

The KODE Museum in Norway, The Swedish Royal Palace, museums in Durham and Cambridge and the Chateau de Fontainebleau have all been burgled in recent years, allegedly by Chinese operatives who have broken in and taken only items of Chinese heritage. Such has been the brashness of the Chinese in these matters that the government has even publicly displayed some of the relics that were stolen from the European museums.

India on the other hand has taken a far softer route, often using diplomacy to request for the return of these ancient wonders. What’s substantially worked in our favour however has been a band of volunteers who have independently taken it upon themselves to pursue this cause. India Pride Project (IPP) is a Singapore-based global volunteer network that is demanding India’s heritage back home. On the note of colonial repatriation, the founder of IPP, Anuraag Saxena famously states, “You took our lives. You took our natural resources. You took our heritage. You can’t give back our lives and our resources; at least give back our heritage!”

Over the years, the volunteers at IPP have managed to create a microcosm of sorts, often using social media, awareness programs, and advocacy to create an appetite for bringing Indian heritage home.

Months of rallying and media lobbying saw the Tamilian Chola Nataraja finally returned to India when then Australian PM Tony Abbott decided to repatriate the stolen idol while meeting Prime Minister Modi in 2014.

“Karma has caught up with a small set of criminals,” says Saxena, “But there are hundreds, if not thousands more out there. There is of course the problem of bringing back heritage stolen by the British during the colonial years, but then when we have Indians stealing and smuggling them out of the country for plain, simple greed. What does that tell us about our mindset?”

Saxena’s question is a very poignant one and in many ways can be answered by Nikhil Singh Rajputt, an independent filmmaker. Rajputt recently made a documentary on the subject titled Blood Buddhas. “I first came to know about the problem of stolen idols when Obama decided to return over 200 statues to India in June 2016,” explains Nikhil, “Then I got in touch with IPP and learned that in reality things were much worse than expected. The good part is that we have support from all sides – the Congress, the BJP, the AIADMK and the TDP.”

This is something that can clearly be understood after watching Blood Buddhas, where you have Congress Leader Shashi Tharoor and BJP’s Subramanian Swamy almost echoing the very same statements. “The British museums are nothing more than chor bazaars,” says Tharoor, while Swamy is quick to introspect and bring things closer to home, pointing a finger at the Archaeological Survey of India or the ASI, in one instance calling them “a big racket”. The “racket,” that Swamy refers to is at the end of the day the only official body responsible for bringing back all our ancient idols. But many have pointed out that they’ve not been able to accomplish much of what is expected of them. One can see several of the idols repatriated by foreign governments being stored in Godrej cupboards and many times left on the floor at the ASI’s storage facility in Nikhil’s film.

“After seeing the film the ASI moved many of the items and put them up for display in purana quila,” explains Nikhil, “I truly believe they didn’t think anything was wrong with storing them in that way. I feel the ASI itself doesn’t understand the reverential status of these objects. They have their own constraints, poor funding, low man power etc. this is what gives foreign universal museums the excuse against repatriation saying that when these are returned they wont be treated in the same way they can handle them there.”

Tharoor rubbishes this line of logic in the film saying, “The problem of how we deal with the statues is India’s and not of the museums who have them abroad. They must return them first.”

During Prime Minister Narendra Modi’s initial tenure, the nation saw several such diplomatic repatriations, with the US vowing to return 200 statues, Tony Abbott’s return of the Nataraja, the Canadian Prime Minister Justin Trudeau’s gift of several smaller figures and German Chancellor Angela Merkel’s return of a stone carving of Goddess Durga. The Durga carving, which Merkel returned to India was traced back to a small temple in Pulwama, Kashmir, giving rise to the question as to how did it get smuggled out the country and land up in Germany. “They’re often smuggled using the same channels as everything,” adds Nikhil who visited the temple at Pulwama just a few months before the infamous attack on the Indian Army there. “The risk of smuggling drugs and sex workers is higher but it’s relatively easy to take out a stone carving.”

With the issue clearly growing graver, many in the country are now asking how we can change things for the better. “We need to first come up with a central database,” explains C.S. Rangarajan of Chilkur Balaji, “When we had our theft there was no way of understanding who was responsible. We didn’t even have photos or dimensions of the statues because they’re considered sacred, and measuring them was seen as unholy. We have now become wise, but a lot more work needs to be done. There should be a state-wise anti-smuggling wing that specialises in ancient heritage. The ASI also needs to help in this. What happened to the 200 statues that President Obama had offered to return? We don’t know if they’ve come back, where are they? Why are you storing statues in godowns? They should be returned back to the temples from where they were stolen. These are not objects of art, they’re deities which we worship.”

Speaking about moving ahead and the need for reforms, Saxena says, “We need a ‘Coalition of the Colonised’. Ordinary citizens demanding back what was always theirs. We’re not asking for much. Just to do what’s morally right. In a flatter, more transparent world, nations will have to give up the aggressive, snatch-and-scoot view of another’s heritage. The system isn’t broken. It was built this way. There has been an institutionalised destruction of Indian culture since Independence. Seventy years of rust will take time to clean.” He adds, “It is natural that prosperous countries, like the US and China, have enacted heritage protection laws. It’s a pleasant surprise that not-so-prosperous countries have as well, like Jordan and Mexico. Its saddening when prosperous countries, like India, choose not to.”

Ironically, there are some lobbyists within our country, who have invested heavily in our national treasure and want to dissolve the Antiquities Laws. They want to make a freer trading market for our ancient treasures. It leaves one wondering if we as people truly want to support the cause of protecting our millenniums-old ancient heritage. Till then, one cannot help but sympathise with the priests and devotees of temples like the Chilkur Balaji, who lost their priceless statues.