In a ‘league’ of their own

While most pubs in Mumbai have a packed weekend schedule, with pulsating music and dolled up patrons, 3 Wise Monkeys in the suburbs of Khar plays host to a bunch of boisterous football fans who gather around to watch the beautiful game on the big screen. The new football season kicked in only yesterday, and roughly 4,000 kilometres from the UK, fans in India are poised to have some footie fun over the next 38 weeks. In Mumbai, this time of the year, the aforementioned pub becomes the official home to Manchester United fans in the city. Called Manchester United Supporters Club Mumbai (MUSCM), the fan club is one of the many official and unofficial groups in India, who profess loyalty to Premier League (PL) teams playing in England.

Popular amongst these fan clubs are the Big Four English football teams — Manchester united, Chelsea, Arsenal and Liverpool — with every metropolitan city and major tier 2 city housing official fan clubs dedicated to the grand old clubs. Some of these clubs can trace their origin back to a decade. Complete with presidents, secretaries and treasurers, these fan bases primarily host match screenings and organise meet and greets with the respective club legends. The idea is to try and emulate the atmosphere of a stadium, replete with chants and songs about their favourite teams and players. This year MUSCM completes ten years and Sunil Thakur, president of the fan association, recounts how the club was founded. “The club started out as a community on Orkut, while I was still abroad. Once I came back to India, I got more involved with the club and we started off by having screenings for matches.

Initially, it was rather difficult to find venues, and we’d have to get at least 35 people attending the screening to make up for the cost of the place. So we’d end up getting our sisters and cousins and anyone else we could manage,” he says with a guffaw. It’s hardly surprising that most people associated with founding these clubs have been avid fans since the turn of the century.  Arpan Peter of Chelsea Football Club (CFC) Bangalore says that his first exposure to the Premiere League only happened in 2001, after his tenth board exams. “That was when we first got cable connection at home. The league back then was a two-horse-race between Manchester United and Arsenal. Somehow, I didn’t see myself liking either teams. I liked Chelsea since they were always the underdogs, and thanks to a player named Gianfranco Zola.” 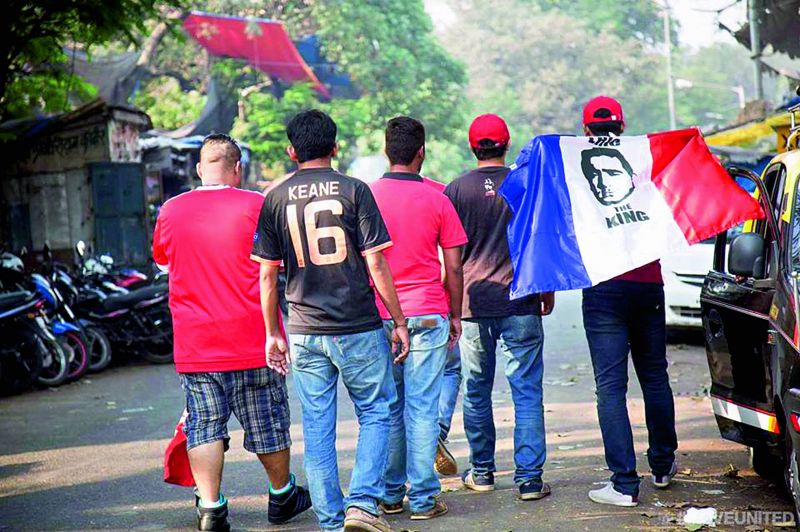 Members of MUSCM walk with an Eric ‘The King’ Cantona flag

For Shalin Ahuja, chairman of Arsenal Delhi: Official Supporters Club, things were slightly different. His association with the 130-year-old club goes beyond just watching them play on the television. “My dad was associated Arsenal back in the ‘60s and I’ve studied in England. My uncle would take me to the games there, which eventually led to my love for the club and the association came about. When I returned to India, I felt like doing something to translate my love for the game and Arsenal into something more concrete. Nishant (Singhal, secretary) and I brainstormed and thought of starting an academy, but that didn’t make much sense. So, we started this club, and thanks to my association with the parent club, we were made official in what I think is a record time of two months.”

The seal of approval from the parent club is what most of the fan clubs aim to gain.  “One thing the official accreditation from Manchester United has done is to have allowed our members to apply for match tickets from right here,” says Sunil, explaining the benefits of recognition. “We get allocated 10 tickets for each game that happens in England; sometimes we get even 50! And it’s a big deal because these tickets are hard to come by in England too. It’s not that difficult to visit the country to watch a game anymore, especially now since Brexit has ensured that the pound is going to remain low for a while. We’re expecting at least 40 people associated with our club to go and watch a match in England this season, via us.” 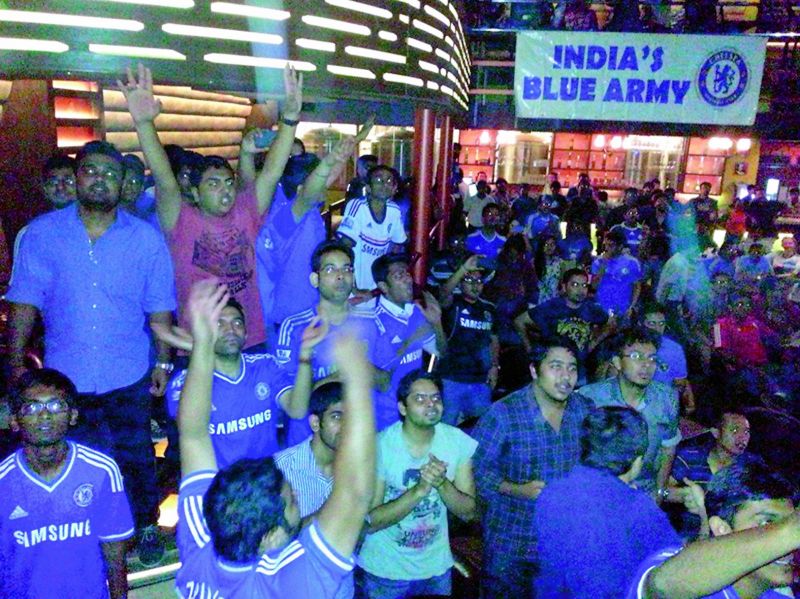 Football frenzy: (Above) Chelsea fans cheer at a screening, (below, left) at a joint screening of Manchester United and Liverpool fans

Thanks to the camaraderie between club members, it can be safely said that these fan clubs are mini families by themselves. Besides coming together for screenings, the associations are frequently seen indulging in football tournaments too. “The younger guys in the club meet up regularly and play informal tournaments,” says Shalin. “The Arsenal boys have even taken on the Chelsea Delhi boys. Of course, it’s all informal! We even have an English member in our club who has started a podcast where we discuss the club.”

MUSCM recently shot a short film to commemorate their tenth anniversary and featured highlights of seasons gone by. The highlight of their build-up to the new season, however, was when the members ended up meeting Manchester United legends Ryan Giggs and Paul Scholes during the Premier Futsal tournament in Goa last month. “I wrote a letter to the two telling them about our club in Mumbai and when we managed to meet Scholes later, he said that he’d been looking for us,” an excited Sunil reminisces. “We are somewhat known in Old Trafford and the dressing room by reputation of being one of the oldest fan clubs in India.”

With great passion come great rivalries, and these clubs are no strangers to occasional bust ups between fan bases in India. “Our rivalry with Liverpool is legendary,” Sunil says. “We would have joint screenings earlier when both fan clubs were younger and they would almost always end up in brawls. One time, after we shifted to our respective headquarters, Liverpool lost the title after almost winning it. They’d come to our pub rubbing their almost-win in our faces. So when they lost, I rounded up 20 United fans and stood outside theirs, chanting at 200 of them. Needless to say, fracas ensued and the owners of the place called the cops on us,” he recalls with a grin.

Arpan of Chelsea, Bangalore, too believes that Chelsea has a strong rivalry going with Liverpool fans. “It’s been this way since we denied them the title two seasons ago. Arsenal too can’t stand us after the 6-1 loss we handed them. United fans are the only ones we ‘somewhat’ get along with but it’s set to change with Jose (Mourinho) going to Old Trafford,” he explains, referring to Manchester United’s new manager, who was fired by Chelsea last season.

But if there’s one thing they all agree on is the fact that they believe that the fan clubs are bigger than themselves — their association with hundred-year-old clubs is no passing fad. “We have a long term plan in place,” says Shalin of Arsenal, Delhi. “I want to run this club and make it a long lasting thing. Fifty or hundred years down the line, I want the Arsenal Delhi club to still be standing strong, long after I’m gone. I want it to be bigger than ourselves.” Echoing the sentiment, Arpan adds, “We’re looking to organise football-friendly events this season. We’re even working with fan bodies of Arsenal, Liverpool and Manchester United for this. Our goal also is to get accreditation from the parent club by the end of this season.”

The teams in England have taken note of the passion that drives these fan clubs in India, Sunil points out. “All PL teams are taking note of India. Every team is associated with something or the other here. United has its own soccer schools, Liverpool and Chelsea too indulge with students, as does Arsenal. They know this is the future; no one can beat India numerically. The fan clubs are a great way for the parent clubs to feel the pulse of the crowd and we benefit too when legends of the game come down and interact with fans here. I’m certain in the next few years, even a huge club like Manchester United will come down for a pre-season match — this would not have been possible four years ago.”