A coach with an experience of over a decade, Harendra knew he would have to do something special to draw the girls’ self-belief.

In the 2007 blockbuster movie Chak De India, there is a scene when Shah Rukh Khan — portraying the role of women’s hockey team coach Kabir Khan — decides to give up on his job midway, asking the girls to find their own way and direction in pursuit of success. Having trained them in varied ways — sometimes strictly, and on occasions with tenderness — he thought the team would move ahead best without him and wanted the girls to find their inner strength. Turn to the real world. On September 8, 2017, former men’s coach Harendra Singh was handed charge of the women’s team and his dilemma was not far removed from that of Shah Rukh-aka-Kabir Khan. A coach with an experience of over a decade, Harendra knew he would have to do something special to draw the girls’ self-belief. In the last few years, Indian women had shown slow signs of progress and even qualified for the 2016 Rio Olympics — their first entry into the quadrennial event after having played on an invitational basis in the 1980 Moscow Games.

Overseas coaches were appointed and sacked, while scientific advisors and physical trainers spent considerable time with the team. But something was missing. When put on the big stage, the team fizzled out. At Rio, they had finished last and their struggles at the big stage did not go amiss. On Day One of the national camp in Bengaluru ahead of the Asia Cup, Harendra did not talk about tactics, technique or even skills. Self-belief was the coach’s mantra, who knew the problem was more in their minds than anything else. “A medal is all we play for and winning is everything,” says Harendra, who reveals that he instilled the words “medal” and “winning” in the girls’ minds repeatedly. “I knew this team had the capability but it was important for them to believe in themselves. We made technical and tactical changes too, but working on the mental aspect was most significant.

“Indians, and especially girls, are very different from athletes across the world and it is very important to set them on the right path. We are not natural athletes brimming with confidence but once we set our minds on something, we can achieve it. “It is that winning mindset that I wanted to instill in them and today these girls have returned home unbeaten from the Asia Cup, winning this title after 13 years. It is the victory of these 18 girls,” said the man who had led the junior men’s team to the World Cup triumph at home last year. Harendra’s switch to the women’s role, however, was met with a lot of skepticism. “I did not listen to any of the criticism. I have a young daughter and she was very happy that I was made the women’s coach. She said, ‘papa, you will do a good job’ and I went with her belief as my strength. I now have 35 daughters who have given me so much joy,” Harendra says.

India unfurled the tricolour at Kakamigahara, Japan, beating higher-ranked China 5-4 in sudden death in the Asia Cup final and with it, earned a berth in the 2018 World Cup at London. If Rani Rampal led by example, goalkeeper Savita Punia turned out the hero in the final, effecting crucial saves. Drag-flicker Gurjit Kaur, a relatively unknown name, was the tournament’s highest-scorer with eight goals while Navjot Kaur, Vandana Katariya, Navneet Kaur and young Lalremsiami were the other success stories. 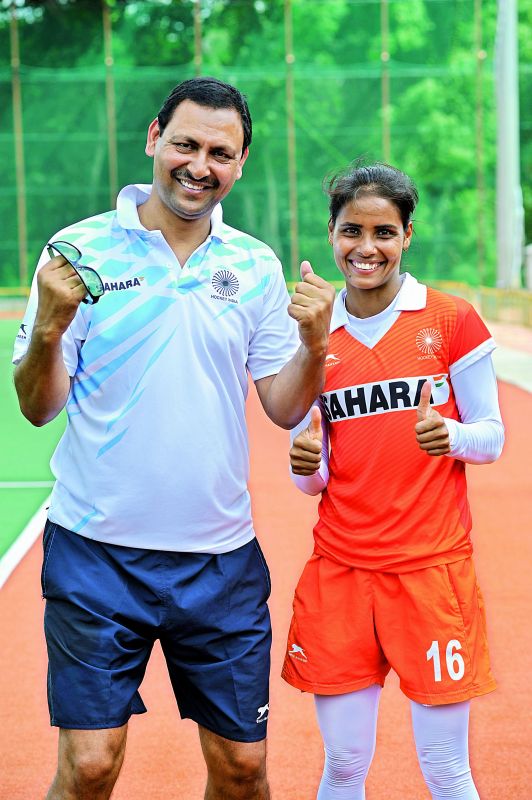 Most players of the women’s hockey team come from humble backgrounds. With families struggling to make ends meet, most have risen above the odds with sheer hard work and determination. Rani’s parents wanted her to choose education over hockey, owing to financial constraints. Her father was a cart-puller who could not buy her hockey kit or shoes, but her brilliant skills coupled with passion for the game kept her going. Today, she is the captain and team’s backbone. 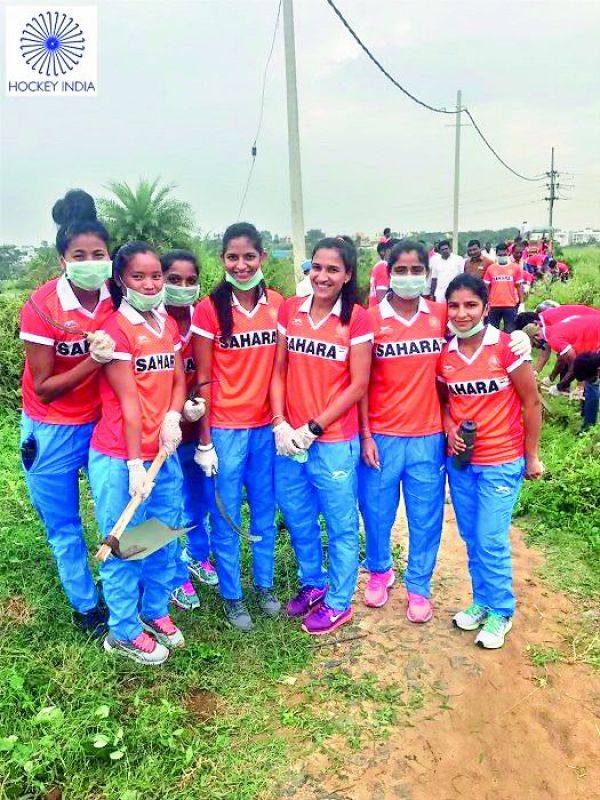 Cleanliness is everything: Members of the women’s hockey team during the Swachh Bharat Abhiyan campaign in Bengaluru recently.

“My father never wanted me to play hockey, he wished that I would study. But I was adamant and insisted I play,” says Rani, who is a striker and belongs to Haryana. She was only 13 when she got a call-up for the junior India camp in 2007. A year later, she was drafted into the senior team and became the country’s youngest debutant at the age of 14. Soon, she went to make her mark in international hockey and is considered among the best forwards globally today.
“I was only 15 when I played my first World Cup and the exposure made me realise what I could achieve with my skills. Hockey has given me everything and today, my parents are proud of me,” she says. 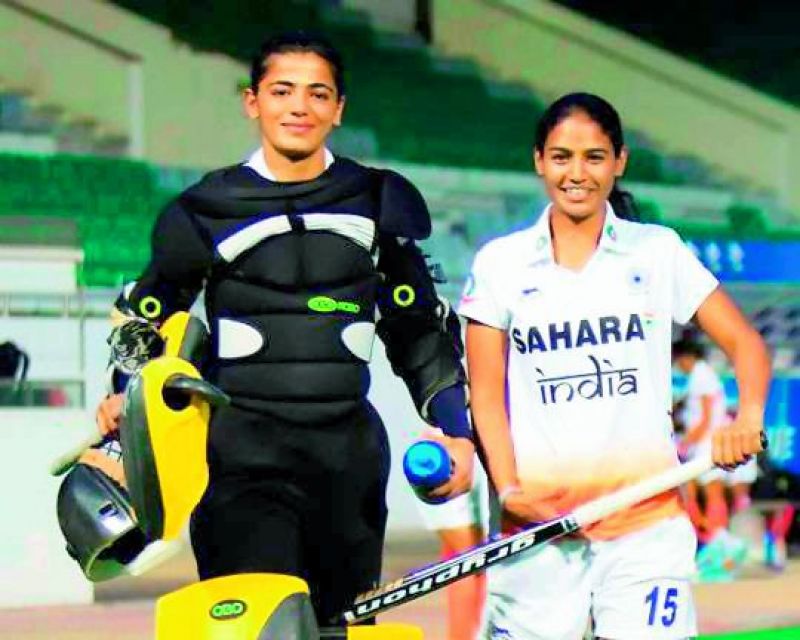 Backbones: Goalkeeper Savita Punia (left) was the standout performer in the recent Asia Cup, where India won the gold.

Unlike Rani, goalkeeper and vice-captain Savita wasn’t keen on taking up hockey but her grandfather Mahinder Singh’s insistence saw her pushed into the sport. Belonging to a village near Haryana, Savita used to travel by bus and “disliked carrying the heavy goalkeeping kit”. “My kit is the heaviest and I used to dread carrying it in public transport as it made me tired. But those were initial days. “Slowly, I fell in love with the game. This Asia Cup medal is a reward for those years of hard work and diligence and we feel very proud,” says Savita, who enjoys the confidence her team mates place on her in crunch situations. “I knew my team was banking on me during the penalty shootout in the Asia Cup final. After Rani scored in sudden death, I resolved to save the next shot and managed it,” recalls Savita.

However, despite her heroics and nine years in international hockey, the lanky goalkeeper is still looking for a job. “I was promised a job under the Haryana Government’s ‘Medal Lao, Naukri Pao’ scheme, but nothing has happened so far. I am 27 and still dependant on my father’s income. Every time we win a medal, I hope things will change but the wait is still on.” Among the younger lot, drag-flicker Gurjit’s struggle too evokes inspiration. Gurjit, who hails from a small village near Amritsar, used to travel close to 20 km daily for training before her father enrolled her into a sports hostel at Tarn Taran.

“I live in a very small village near the border with no facilities or sporting activity. No one there understands the game of hockey and I am very happy that I have become the first to represent India from my village,” says Gurjit. “My father is a farmer but my parents supported my decision to take up hockey. It was something new for them, but they believed in me.” Harendra says they are a bunch, who dwell on each other’s success. He, however, is struggling to make a minor change in his own coaching style! “I have trained boys all my life and everyone knows that I have an aggressive style when we lose or someone doesn’t put in the best of effort. With the men, you can use certain words and language and I am having a hard time restraining myself!” the coach says with a smile. “But then, women are always more focused than the men and I don’t need to shout a lot.” 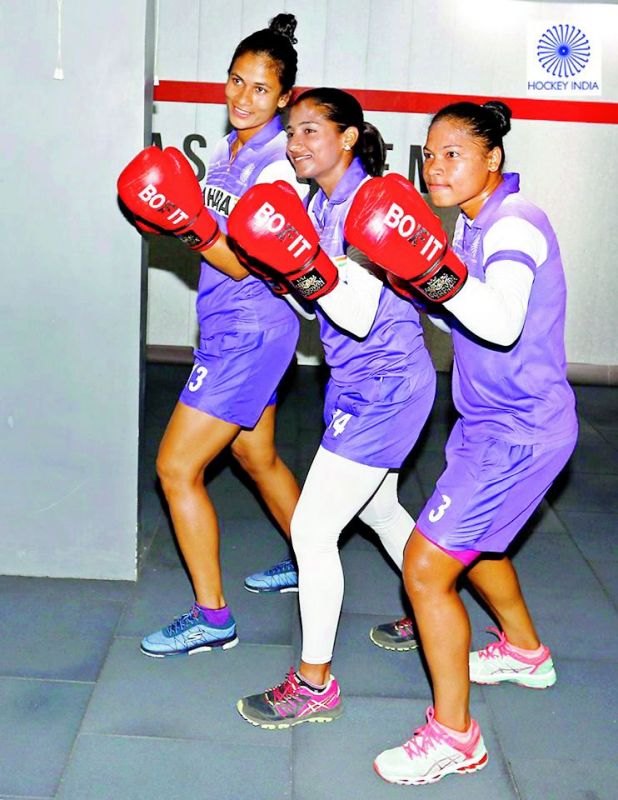 Team bonding: The players indulged in off-beat activities like kick-boxing in preparation for the Asia Cup.

The early 2000s were a golden period in women’s hockey. Talented and gutsy players in Madhu Yadav, Suraj Lata Devi, Mamata Kharab and many others, able coaches in Mir Ranjan Negi and M.K. Kaushik and consistent results — this was the story of the national team who brought home the gold from the 2002 Commonwealth Games in Manchester. Success followed at the 2004 Asia Cup at home before it all went downhill a few years later. Post 2010, the men’s team enjoyed greater success and even facilities, while the women suffered both on account of inconsistent results and poor coverage.

An influx of overseas coaches brought along some changes in the last three years, but a lot more still needed to be done. Successes were far and few, and when they finally arrived — like the Asia Cup last week — it sometimes went unnoticed for lack of TV coverage. While the men’s Asia Cup three weeks back was televised live, the women were deprived of the same with fans resorting to social media to catch up on occasional updates. Says Rani, “Of course, we feel very bad about it. No live telecast means fewer fans, lesser appreciation for the players and even the game’s popularity takes a hit. It is after long that we have won a gold and it would have been great to share our success and joy with fans, who could have watched us live. “I hope this win will change things and bring spotlight on women’s hockey.” 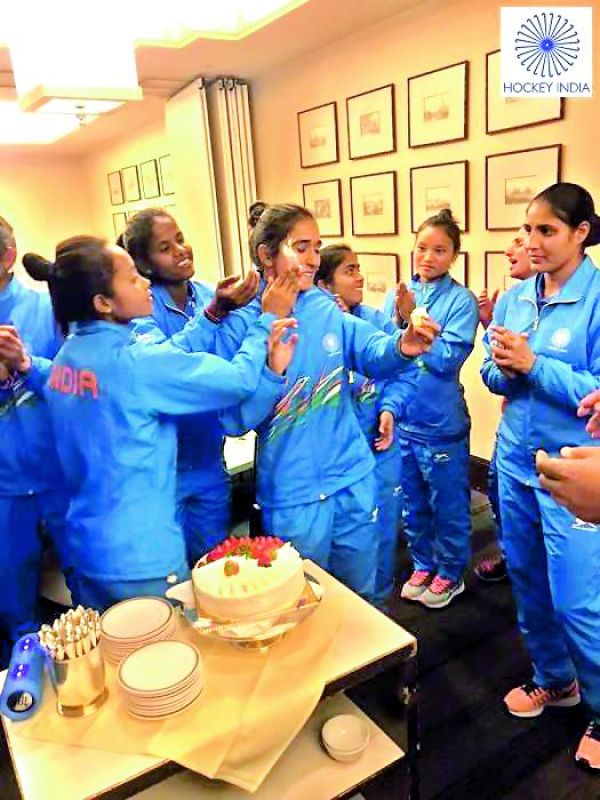 Happy family: Candid moments as Monika celebrates her birthday with team mates after their victorious campaign at the Asia Cup in Japan.

Rani Rampal & Co. know that they have set the bar high with their solid performance at the Asia level that saw them break into the top-10 of world rankings. The year ahead will see them compete in three crucial tournaments — the Commonwealth Games, the Asian Games and the World Cup — and there will be expectations. “We have to dream high and begin work accordingly. We now know what it feels to stand on the podium. It’s the success that we are chasing now and not just participation and filling in the numbers. We will have to improve and build on this win,” says Rani. The road ahead may be hard but for now, a beginning has been made.