The accolades pouring and the overwhelming response of people has not given much time to Hima Das’ parents to sit back and enjoy their daughter’s golden feat. They are proud of their daughter, but don’t want to see her getting complacent with her performance at the Asian Games. “We are happy that her focus is on improving her timing,” says the proud father Ranjit Das, while suggesting that she will have to spend more time on her training and fitness to do better in the future. “This is the beginning of her career, she has to make her presence felt in the Olympics next,” he adds.

Admitting that her sensational ascent to the top has surprised the nation, the father wants Hima to focus on her performance so that blunders like the false start in the semi-final of the 200m are not repeated in future. Her mother Jonali recalls how Hima has been competitive since childhood and hated losing at games. Referring to an incident when Hima was not allowed to board a passenger vehicle on her way home from school, she challenged the driver and ran two kilometers down the road to her home beating the passenger vehicle. “She is stubborn since childhood,” says the mum. 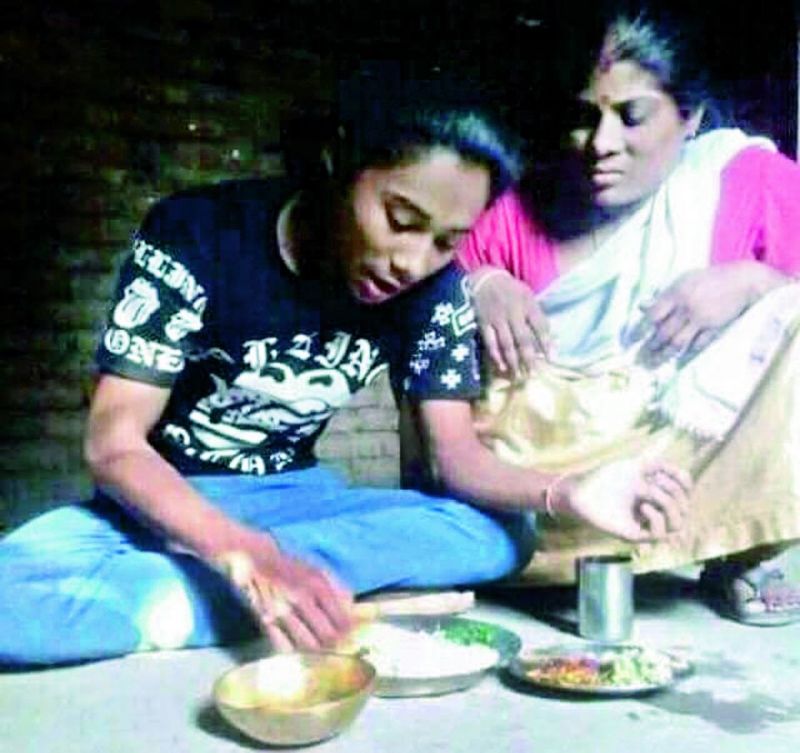 Hima Das with her mother Jonali at their home in Assam’s Kandhulimari village.

Jonali recollects how Hima used to get up in the early hours of dawn to practice in a local grazing ground. She would go early as villagers let their cattle loose in the grazing ground after sunrise. Jonali says, “We are happy that state government officials have decided to develop the grazing ground into a proper playfield for the village.” Hima has become the second Assamese athlete after Bhogeswar Baruah to win an international gold medal. Baruah had clinched gold in the men’s 800m event at the Bangkok Asian Games, way back in 1966 and had once wondered if he would live to see another Bhogeswar, but now felt glad to be proved wrong. His advice to Hima is to stay away from the limelight and focus solely on her training for the Olympics.

“Her Olympic prospects are bright. This is just the beginning and I believe the government of India should send her out of the country for better training facilities. She shouldn’t be wasting her time in felicitations and similar events,” says Barua. Meanwhile, Assam government has appointed Hima as the state’s first sports brand ambassador besides felicitating her with an award of Rs 50 lakh on her return to the state. Hima Das won one gold and two silver medals in the Asian Games.