Serena Williams prevailed over her elder sister Venus in the end, defeating her 6-4, 6-4. (Photo: AP)

And she has done it! Serena Williams has defeated her sister Venus to be crowned the Australian Open champion for the seventh time in her career.

Serena crouched to the ground in happiness, as her sister Venus hit her return wide of the court at the end of a tiresome rally, in which the former was on match-point.

This is Serena's 7th Australian Open and 23rd Grand Slam title. With this victory, she moves ahead of Steffi Graf, who had won 22 Grand Slams during her career. Serena is now second only to Margaret Court (24) in terms of the most number of Grand Slam titles won.

Venus holds her serve, but the inevitable is drawing near. Serena just needs to hold her serve now, to win her 23rd Grand Slam.

Heartbreak for Venus. Gave away that service game after saving two break points. Serena did well to pounce on her sister's second serve in the end.

The Williams sisters are treating the crowd in Melbourne with some delicious serves. The second set is a complete contrast to the first one.

Venus seemed to be down and out over there, when Serena went 0-40 up, with three break points in hand. However, Venus came back with five straight points to take the game, and keep the set on serve. Brilliant play by the two champions.

Brilliant serving by Serena. She seems to have found her rhythm after struggling initially. Venus gave little away in the first set, but the brilliance of Serena was clear to see towards the end.

Venus came up with some impressive serves, to hold her service game against her sister, who still holds the upper hand. Serena to serve for the set.

The 22-time Grand Slam champion has found her way back into the match, as she breaks her sister to take the lead. While Serena still seems to be struggling with her serve, it will be interesting to see whether Venus can recover from this.

Both the players have finally been able to hold their serve. While Venus is playing a water-tight game, Serena still seems to be fighting her demons. However, the latter did well to hold her serve this time.

The service breaks continue. Serena seems to be struggling with her serve. It will be interesting to see whether it is a mental block, or whether it is the wind.

Service breaks seem to be in fashion today. Neither of the players has held her serve as of yet. Serena has broken her sister twice, while Venus has broken just once.

Melbourne: The Williams sisters have rolled back the years with their performance in the 2017 edition of the Australian Open, evoking memories when both Serena and Venus dominated the world of women’s tennis.

The first time the two sisters had played at the Melbourne, it was still the 20th century, and Venus and Serena were two teenagers playing in a tour match, trying to make a name for themselves in the world of Tennis. 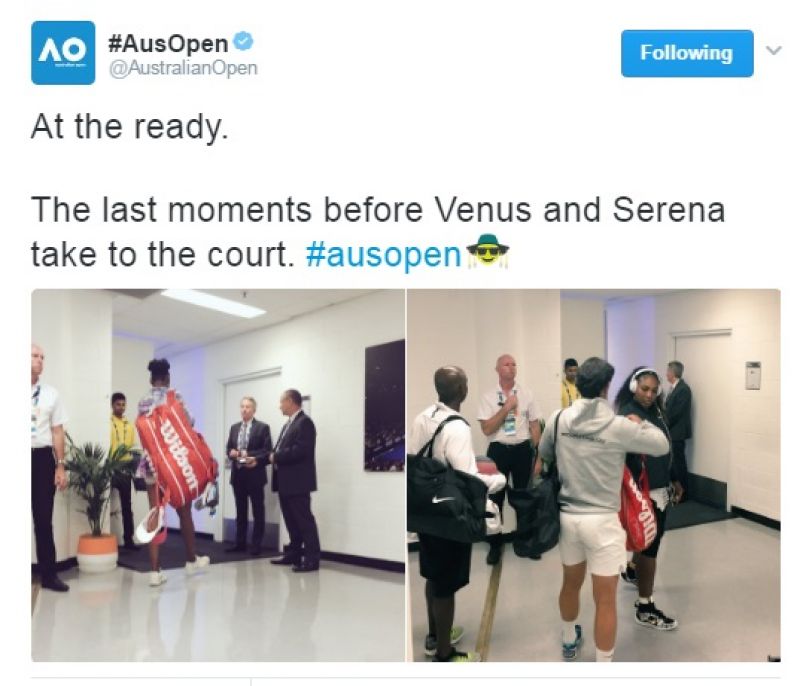 Since then, the Williams sisters have gone on to mesmerise the tennis world, winning a total of 29 times between themselves.

Other than the fact that she will be playing against her sister, Serena Williams will have the additional motivation of eclipsing the legendary Steffi Graf with regards to the number of women’s singles Grand Slam titles won. Williams is now level with Graf with 22 Slams.

Meanwhile, Venus, who has seven major titles to her name, will be looking to get one step closer to achieving a career grand slam. She is yet to win the Australian Open and the French Open.

Serena’s head-to-head record against her sister in the Grand Slam finals is even more impressive – 6-2.