Serena Williams announced her engagement to tech entrepreneur Ohanian and last week revealed she is expecting her first child and will not play again this year. (Photo: AFP)

Los Angeles: US tennis great Serena Williams on Monday marked her fiance's birthday and her return to the world number one ranking by posting an emotional message to her unborn baby on Instagram.

Williams' social media post showed the 35-year-old sitting on a beach lounger in a black two-piece swimsuit that revealed her growing baby bump. 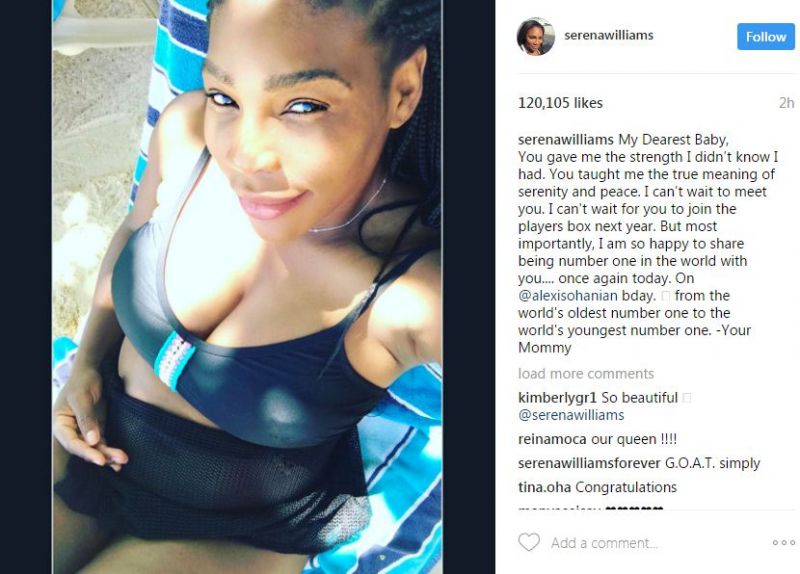 Williams is due to give birth in September, the month she turns 36 years old.

In December, Williams announced her engagement to tech entrepreneur Ohanian and last week revealed she is expecting her first child and will not play again this year.

She was already expecting when she won her record-setting 23rd Grand Slam title at the Australian Open in January -- where she beat her elder sister Venus in the final.

Kelly Bush Novak, Williams' publicist, had said this week that the US star "looks forward to returning in 2018" and that was echoed by her coach Patrick Mouratoglou.

Overtaking Australia's Margaret Court for the all-time record of 24 Grand Slam singles crowns – Williams is on 23 – is also "a determining factor" in her motivation to plough on, the Frenchman said.