Australian Open 2018: Simona Halep in 4th round, beats Lauren Davis in a thriller

Melbourne: World number one Simona Halep saved three match points before edging an inspired Lauren Davis 4-6, 6-4, 15-13 in a thrilling marathon to reach the fourth round of the Australian Open on Saturday.

The Romanian fought back from the brink at 11-10 in the epic final set before serving out the match on the fourth attempt after a taxing three hours and 44 minutes on the centre court at Rod Laver Arena.

A former quarter-finalist at Melbourne Park, Halep closed out the attritional contest on the first match point, when 76th-ranked American Davis, who had gone for broke all match, fired into the tramlines, her 73rd unforced error.

The 26-year-old Halep will meet the winner of home favourite Ashleigh Barty and Japan’s Naomi Osaka for a place in the quarterfinals, having carried her injured ankle through a deciding set of 142 minutes.

“I‘m almost dead but it was nice that we could show good tennis,” Halep said in the on-court interview, raising a laugh from the crowd.

”Definitely it was a very tough match, so long, and I never played the third set so long.

“I just feel that my muscles are gone. My ankle is -- I don’t know how it is because I don’t feel it any more.” 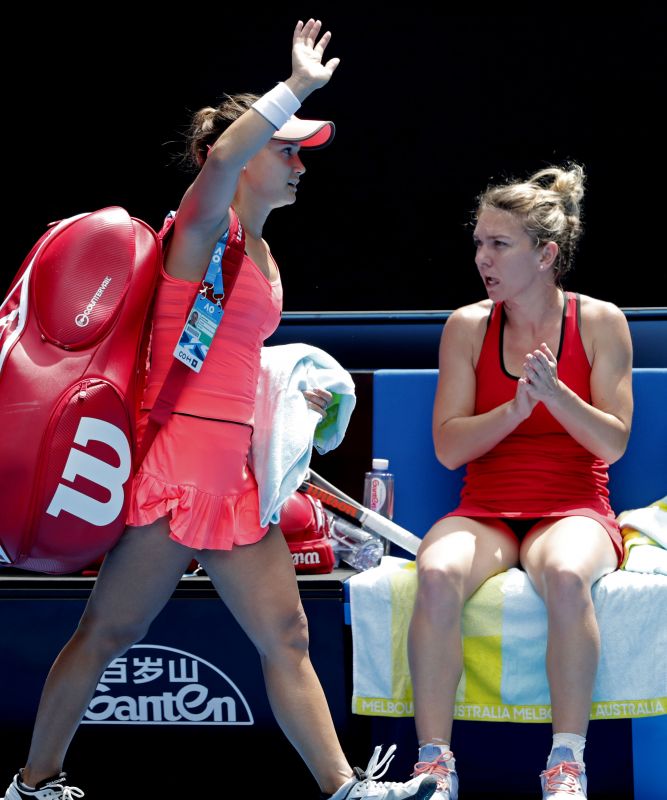 Davis, a baby-faced 24-year-old with a monster forehand, was majestic in defeat, breaking Halep three times when the Romanian served for the match and battling on after losing a toenail late in the game. (Photo: AP)

She came within an inch of the biggest win of her career when she swooped forward to pounce on a speculative drop-shot and whipped a passing shot to earn three match points at 11-10.

Halep nervelessly saved them all, winning five points in a row for a galvanising hold before Davis removed her sneaker and walked gingerly to her chair.

She took a medical timeout to stall Halep’s momentum and the Romanian fumed on the baseline as a trainer worked on Davis’s toe.

With Davis hobbled slightly, Halep moved in for the kill but the American saved five break points to frustrate her opponent, and later thanked the net cord for helping her hold again at 12-12.

Halep finally breached Davis’s serve at 14-13, and edged a 17-shot rally to come within two points of victory.

No shaking, no sharing, no showering: Welcome to post-virus tennis