In their WhatsApp chat, Mahesh Bhupathi is seen categorically telling Leander Paes that he was still undecided about the combination but logically Rohan Bopanna would suit the conditions in Bengaluru. (Photo: PTI)

New Delhi: Mahesh Bhupathi on Sunday said he had no "personal agenda" in keeping Leander Paes out of the Indian Davis Cup team and said his former partner's decision to leave Bangalore mid-way into the tie was a final nail in the coffin.

After India's Davis Cup win against Uzbekistan, Bhupathi made public his WhatsApp chat with Paes on March 5.

In their chat, Bhupathi is seen categorically telling Paes that he was still undecided about the combination but logically Rohan Bopanna would suit the conditions in Bengaluru.

Bhupathi is livid that Paes has accused him of bias and using his position to exclude him from the playing squad.

The former Davis Cupper tersely pointed out that Paes had his own definition of "respect" and also claimed that the winner of 18 Grand Slams never always walked the talk when it came to disciplinary issues. 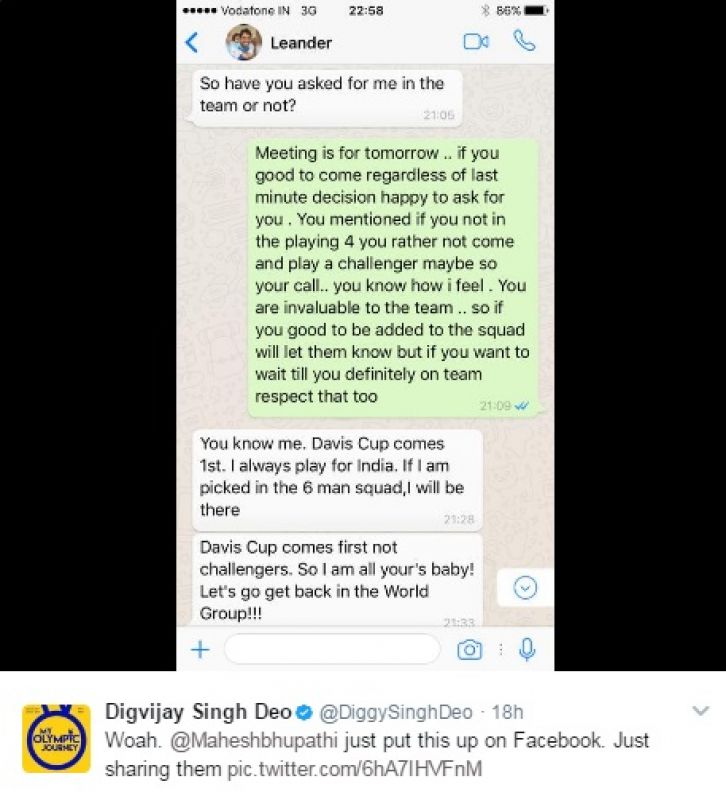 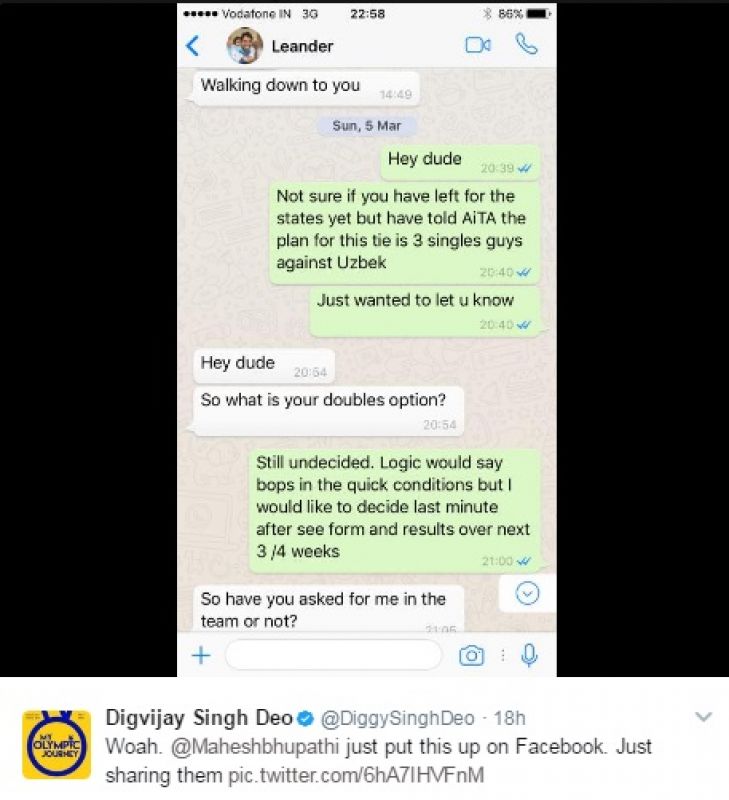 "Through the twenty years of my career, I always believed facts will always surface and unless I was pushed into a deep hole I never responded or felt the need to because regardless of what was said the media would play is up as a personal feud. Let me the first to say, there was never a personal Feud, when I came on the Davis cup scene in 1994 I was a Leander fan and was excited to see him play Wayne Ferreira who was 10 in the world," Bhupathi wrote in a stinging yet emotional Facebook post.

"....he demolished Ferreira in straight sets. I become more than a fan, besides the tennis, he had the outlandish charm with the tennis hierarchy and media. However things changed quickly, when both our captain sir Jaideep Mukerjea and coach Enrico Piperno were strong armed out of the team end of 1999 because he had heard a rumour of them being upset he didn't come for the tie against Italy but was fully fit to play chennai open the following week, that should have been the first red flag.

"He had his own definition or lack of for the word "Respect" and it quickly become apparent there was only one train on the tracks, either you get on or stay home, I could probably write a book on all the instances over the years but I am trying to keep this short." 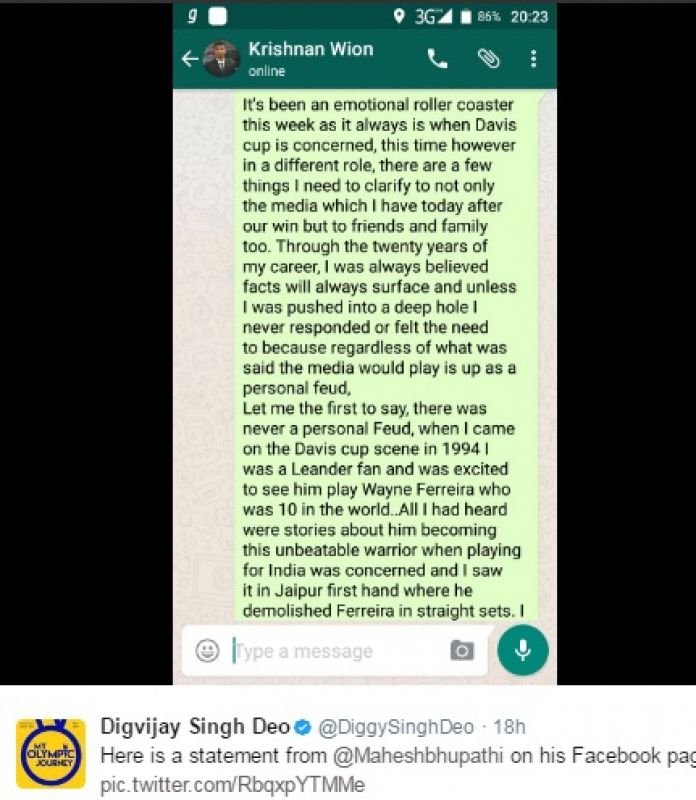 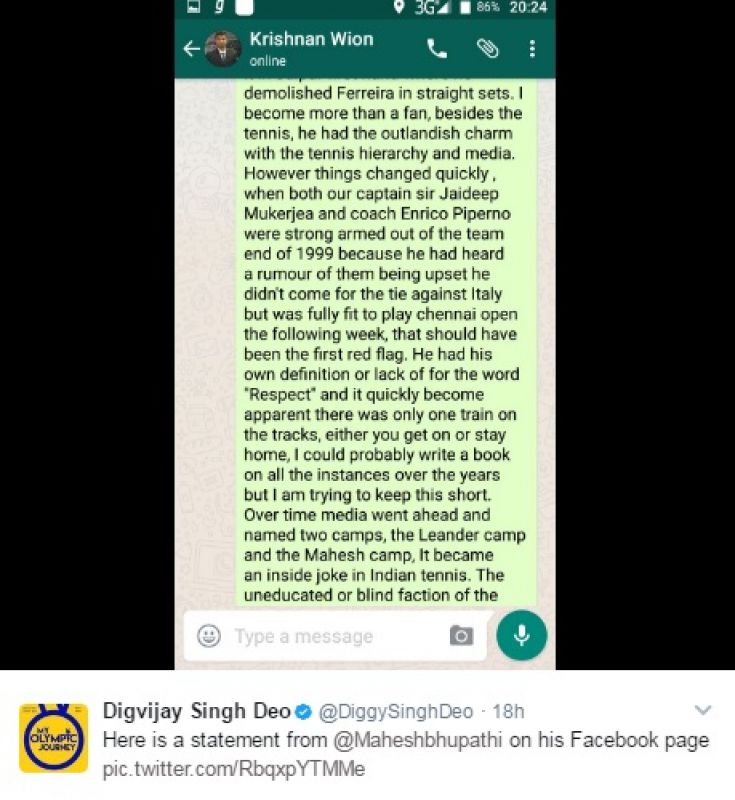 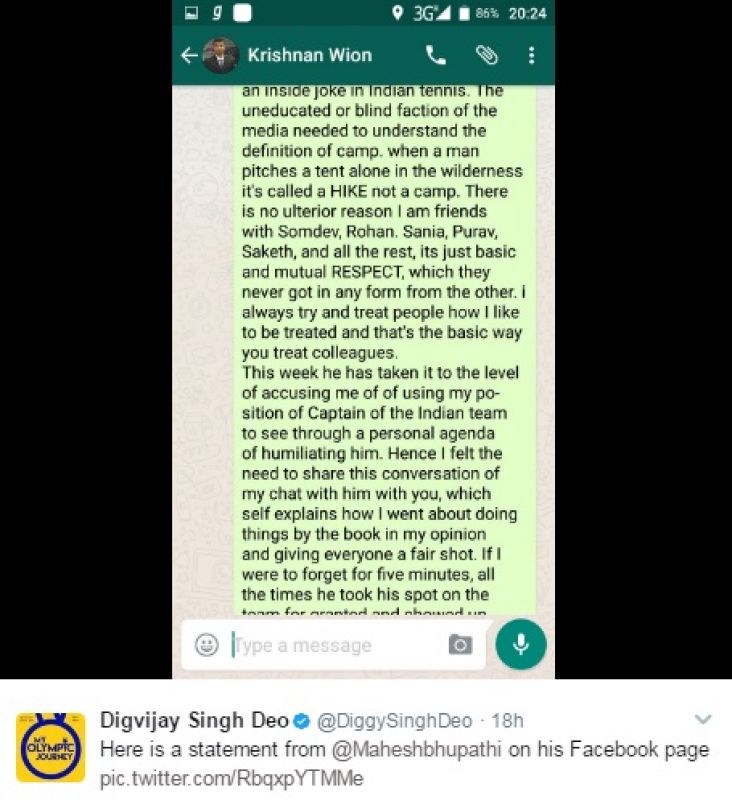 Bhupathi said why he was friends with Somdev, Rohan, Sania, Purav, Saketh was becauase they had mutual "RESPECT which they never got in any form from the other (Paes)."

"I always try and treat people how I like to be treated and that's the basic way you treat colleagues."

"If I were to forget for five minutes, all the times he took his spot on the team for granted and showed up late for Davis cup or the Olympics, or not comply with team requests on uniform or outfit, or blatantly tell the captain or management that things have to fall in place the way he needs them to, his leaving Bangalore on Saturday in the middle of our tie was the final nail in the coffin."

In a clear warning, Bhupathi made it clear that if Paes does not like his ideas, he should not come in his way since he has backing of AITA.

"....I enforced a gag order on the team so there would be none (drama), but he didn't adhere to that either. I have been given the full support now of the federation, and the selection committee so now there is a New Train on the tracks, it's to get India back to the World group, it's full of energy, youth, positivity, hard work, and dreams.. those who don't like it should stay out of the way because we don't plan to stop till we get there!!!," Bhupathi concluded.

Paes, livid at Bhupathi for making their private conversion public, said his former partner's conduct was unbecoming of a Davis Cup Captain.

In his three-point statement, 43-year old Paes said the main criteria for selection was indeed form even as Bhupathi claimed that form was not sole criteria.

The winner of 18 Grand Slam titles said he would soon come out with a detailed response to Bhupathi's claims. 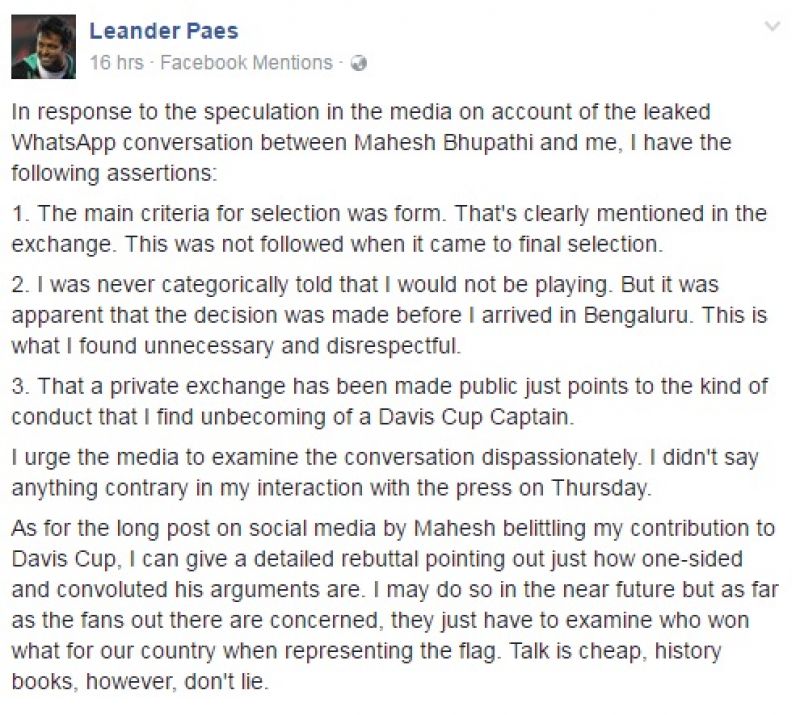 Kamalpreet gave her best in Olympics: her family

In India’s hockey revival, Pakistan sees hope for itself too