Catwoman Serena is a Supermom

Serena Wiliams came out in a superhero costume to play in the French Open at Roland Garros. While that is symbolic of her status as the super woman of the world of sport, what endears her to all the women of the world is she is also a doting mom now. And she spilled all her innermost feelings on becoming a mother in tender revelations in a long media interview for the Harper’s Bazaar July issue. 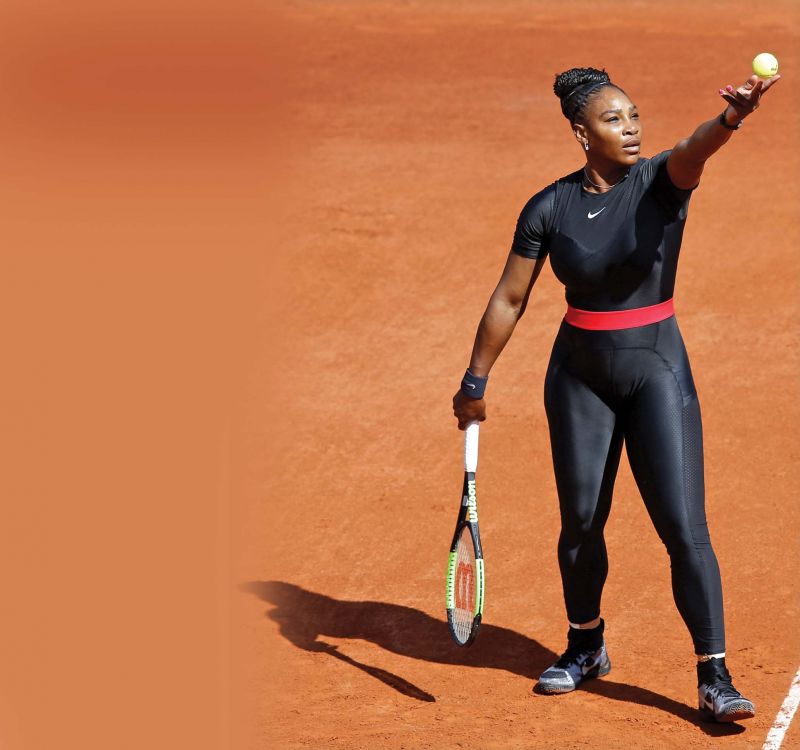 As Serena recounts how she wept when she was not able to find her daughter Alexis Olympia’s feeding bottle, she would have won more female fans. Here is a strong woman who could be reduced to such poignant tenderness by motherhood. In speaking out about the travails of childbirth that can imperil some should also make her the absolute heroine in the hearts of women around the world.

Playing her first grand slam since becoming a mom to Alexis Olympia, daughter of Reddit co-founder Alexis Ohanian, is itself an act of courage. She needed emergency caesarean section in September 2017 because the child’s heart rate was dropping during labour. The complications were life threatening for the mother as blood clots could travel to her lungs and she needed surgery to prevent that. She was bedridden for six weeks after childbirth and was overwhelmed by her situation.

“I remember one day, I couldn’t find Olympia’s bottle and I got so upset I started crying …because I wanted to be perfect for her,” she revealed. As could be the case with every mom, Serena says she is ready to have another child. “Olympia needs a little sister, and then we can have a boy. I’ve only been around girls my whole life,” is her telling comment on her urge for more offspring.  Any woman would happily empathise with Serena’s wish to have more children.

Given what she went through in giving birth to a daughter, her seeking superheroine status in a catsuit on court seemed more natural than aspirational.

“Catsuit anyone? For all the moms out there who had a tough recovery from pregnancy — here you go. If I can do it, so can you. Love you all!!(sic),” She tweeted. But the sexy black leotard she wore for  the cover of Harper’s Bazaar could be called aspirational.

Talking about the catsuit to a news website, Serena shared that though the suit was designed way before the movie Black Panther, it makes her feel like a superhero from the movie.  The full-length skintight outfit is made of compression fabric. She once revealed that she likes wearing the catsuit to prevent blood clots of the kind that threatened her very life during childbirth.

Serene told Vogue magazine: “Sometimes I get really down and feel like, man, I can’t do this. No one talks about the low moments - the pressure you feel, the incredible letdown every time you hear the baby cry. I’ve broken down I don’t know how many times. Or I’ll get angry about the crying, then sad about being angry, and then guilty, like, ‘why do I feel so sad when I have a beautiful baby?’ The emotions are insane.”

We asked Farah Agarwal, award-winning designer in interior and décor, what she thinks of motherhood for a working woman and she says, “Work no more becomes a fixed time table. Once the kids come into the picture it becomes even more challenging to plan the work day accordingly in a way where you are able to accommodate the kids’ requirements comfortably which don’t really have a fixed timing always.”

She elaborates, “There are days when I travel on work or have very long working hours that I get guilt ridden on my own for not giving the kids enough time and then do everything I can to make up for it. But that’s just me thinking like that. I guess it’s just a mother thing to constantly keep questioning yourself about doing your duties well.  There are expectations and responsibilities which come after the kids come into the picture but those expectations are more internally from us as mothers itself than anybody else.”

“And this is where your family comes into the picture and I am blessed with a very strong support system at home who were always more than happy and ready to share my responsibilities with me making the transition very smooth and easy. I started work almost within a month or 2 after having my younger one and that was purely because of the confidence and support I got from my husband who made it seem like a piece of cake. Of course, in hindsight, when I think of it now it definitely doesn’t picture as a piece of cake but when I was in the moment then it definitely moved quite smoothly.”