It was a Saturday morning made for sports lovers at the Madras Literary Society. Jayashree Bharath spoke of golf in loving terms, transmitting her devotion to the sport to an audience who were fully absorbed by the narration. 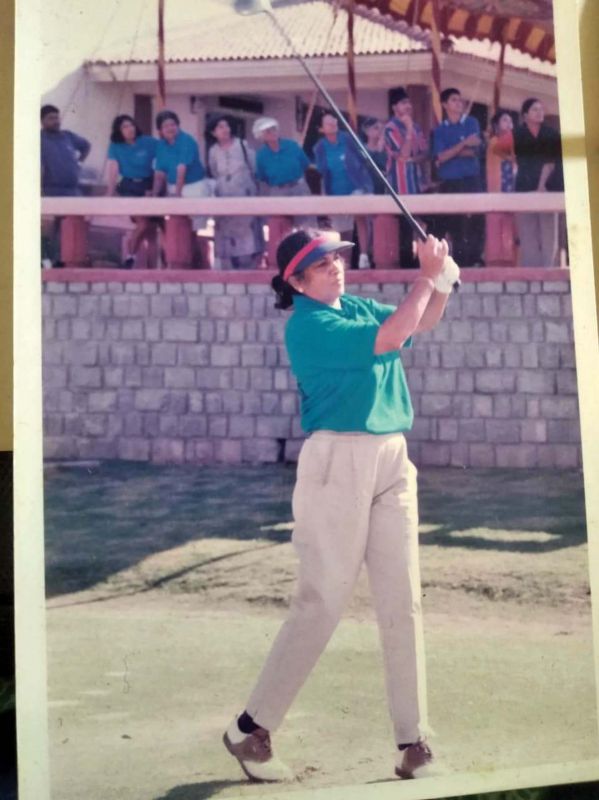 Jayashree, who is 73 now and has been active on the golf scene, reminisced about her early days in the sport and how opportunities embraced her along her journey as a lady architect who took inspiration from her husband who was an avid golf player.  Jayashree took to the sport when she was around 40.

From the formation of first Ladies Golfing Union by the Wimbledon Ladies Golf Club, the handicapping system coming into being to  the foundation of first women’s golf club, the morning walk took the audience through the pages of history beautifully put together by Jayashree. Golfing history was  witness to some harsh realities too - like the practice of ‘fore-caddies’ , which translates to a child being used to spot the ball that has been hit as he or she walks ahead of the team.

As the basics of the sport came out through the discussion, Jayashree also accentuated how difficult it was to procure golf sets from abroad back in her days, especially golf equipment for women. There is no struggle these days with brand outlets in sports shops and pro shops selling golf sets aplenty.

The golfer told the tale of Madras women taking to golf for the first time back in the early days when Padma Devi, Maharani of Pitapuram, was the pioneer in the Madras golf scene and was captain for seven years.  Prema Srinivasan,  Lily Ratnam from the TVS family, Narasimhan and  Padmini Raghavan still shine in the pages of history on Madras women and golf.

Malini Srinivasan was instrumental in boosting women’s confidence and encouraging them to play even better as she requested the Indian players as well as the foreigner ones to donate their cups and trophies. And what could be more encouraging for other women to take up the sport was seeing Malini, Sumathi and Padmini Raghavan tucking their pallus in the waist and hitting the golf ball straight and hard.

Detailing her relationship with the sport, the golf lover says how it was a ‘love at first-sight’ kind of affection for the sport as she realised it is all about playing against oneself and nobody is to be blamed for a bad shot made. And it is also an ethical sport as the player needs to be honest about declaring his or her strokes.The South India Ladies Golf Association  will forever be etched in heart for the two tournaments it held in Kodaikanal and Ooty.  Southern chapter of Golfing Addicts society of India still continues to remain active.

DC  catches up with Jayashree on the sidelines of  the talk on ‘Women, sports and Madras’ and gets to know her aspirations with regard to golf scene in city and the active involvement of women in it.

Talking to DC, the lady who had been involved with sports before she took up golf upon the insistence of Padma Devi, shares with DC what worries her and how she aspires to see the city golf grow with more women coming forward and playing it. But does the sport have enough exposure in the first place?

“There is not enough exposure of the sport in India and media got to play a role here which, I believe, will kindle people’s interest in the sport. Golf equipment is expensive. There are a lot of courses, but are they really accessible to the common man? Even if ladies are interested in the sport, they may not be able to afford a membership in these expensive clubs. Emergence of public courses is needed and the government needs to look into it. And possibilities are enormous as the courses can be tourist attractions for foreigners who can go there and play”

Jayashree feels Chennai is very conservative and the city would rather have its girl children concentrate on studies. “Some ladies come and play a few holes. They do not play the entire course. Devoting at least 4 hours a day is necessary”

Jayashree stresses on how easy the sport can be for anyone; only willingness is required. “Unless you want to play a tournament where you have to play all the 18 holes, you do not have to pair with anybody - you can just play on your own.”

“Golf is a game you can play at any age. You may not be winning trophies but it is such a fun game to play in the beautiful open space. It just takes your mind off your worries for those 4 hours.”

The boss lady, who was working in her family firm, would make it a point to keep at bay office work on Wednesday afternoons as playing a tournament was her priority. Jayashree believes it should no way be called a slow, gentle sport, considering the amount of hard work needs to be put in to maintain fitness.

“Those days we used to think that it’s only old people who would swing at the ball. That is not the case anymore. Now it’s an age of cutthroat competition and for that, high level of commitment and  accuracy are required. Will that come without physical fitness and top form?  Even children these days get into sport as early as when they are six years old.”

“Chennai is lagging behind when it comes to women involvement in the sport. The number hovers around 25 when participation rate is much higher in other cities like Bangalore", sighs  Jayashree.

Hardik keen to bowl, but we need to listen to his body, says Zaheer