Many a hurdle to cross

John fondly remembers that he was among the first National Cadet Corps (NCC) cadets and that his family was always supportive of his interest in outdoor physical activities.

The dimunative and sturdy old man is 86 but has no wrinkle on his face. Retired school teacher P.S. John is just back from a trip from Chennai to his house in Kanjirappally, Kerala, but doesn’t show any tiredness. He remains fit and energetic and impresses visitors with his pleasing manners. Equally impressive are the countless medals and honours neatly exhibited at the drawing room of his house.

John has received the ‘Best Asian Athlete’ award from the Asian Athletic Federation of India this year, after having completed 64 years in the sports field. A veteran sports champion, John is a hurdles specialist and has not stopped competing yet. Last year, he represented India in the World Masters’ Athletic Championship held in Lyon, France and won the Gold in 200 metres hurdles, another Gold in 80 metres hurdles and Bronze in Long Jump.

“My dream is to compete in the Masters Athletic championship for the hurdle race for those aged above 90. Hurdles race is a difficult sport and if you trip, you land straight on your chest. It has to be done in a scientific way,” says John.

John is now preparing for next year’s world meet, the first step of which will be the state leg of the meet in Kannur coming January, followed by the national championship in February to be held in Thiruvananthapuram. John has no doubt that he will be among the medalists. “So far, I have received medals in all the championships I have participated in and had a chance to compete in almost all the stadiums in India,” he says. 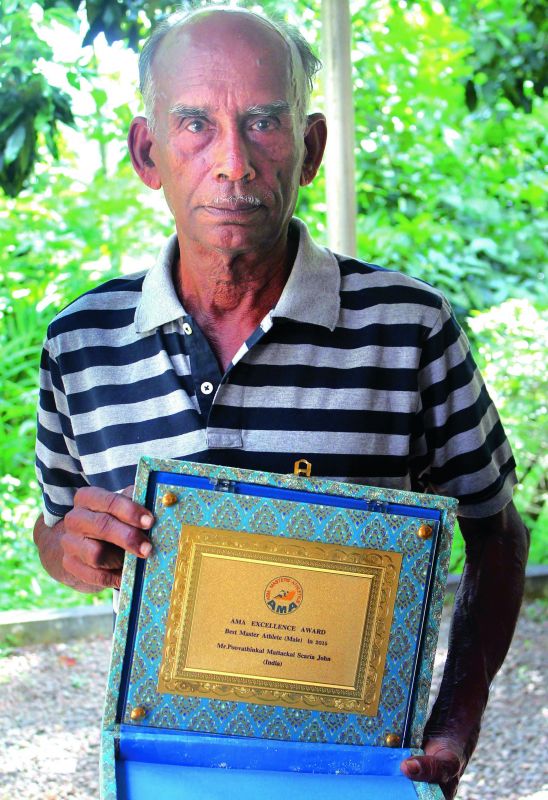 John fondly remembers that he was among the first National Cadet Corps (NCC) cadets and that his family was always supportive of his interest in outdoor physical activities. “During my younger days, there were hardly any facilities to train for sports. Still I could accomplish a lot. What happens these days is that people quit sports after they settle down with a good job. There is no retirement for sports,” declares John.

After his retirement as a Malayalam language teacher in 1985, he has been engaged in organic farming at his own farm and he says that’s the secret of his fitness. “I don’t like to call myself a retired teacher, rather I am a full-fledged farmer. We produce organic products in our farm and that is how I live a simple and healthy living. I don’t consciously try to be fit to perform well but try to be active and in tune with nature.” He adds that his best sporting achievements came after 55, the age when people opt for retirement.