Washington Sundar: The giant in the squad

DECCAN CHRONICLE. | C. SANTHOSH KUMAR
Published May 18, 2017, 12:00 am IST
Updated May 18, 2017, 2:28 am IST
Washington Sundar, the lad with an intriguing name, has impressed with his bowling prowess for the Rising Pune Supergiants.

Were you born in the US capital? Were your parents Hollywood fans? Do they relish the apple variety? These are some of the intriguing questions journalists have asked Washington Sundar over the years. When the 17-year-old Chennai boy, representing Rising Pune Supergiants, took the centre stage and plotted Mumbai Indians’ downfall with a three-wicket burst in the IPL Qualifier 1 on Tuesday, many from the audience would have made a Google attempt to find the origin of his name.

For starters, he was named after his father’s mentor, P.D. Washington, who helped Sundar Senior financially during his playing days. Washington was born within a month of the mentor’s passing. His entry into the IPL was equally fascinating. The all-rounder, who opened the batting for Tamil Nadu in Ranji Trophy, enrolled his name for the 2017 IPL auction, but went unsold.

Not one to be heartbroken, he chalked out plans for the summer training, but a call from RPS assistant coach, Hrishikesh Kanitkar, who is also the in-charge of the Tamil Nadu Ranji team, came as a pleasant surprise. He was signed up as replacement for an injured R. Ashwin. Washington was not bogged down by the responsibility of filling in the big shoes of his state senior.

At the selection shootout, Washington impressed the Pune management by castling skipper Steve Smith at the nets. He continued his impressive run into the tournament as the off-spinner who has taken eight wickets in 10 matches and more importantly, holds an economy-rate of 6.61. For someone who bowled in the Powerplay, the stats are astonishing. 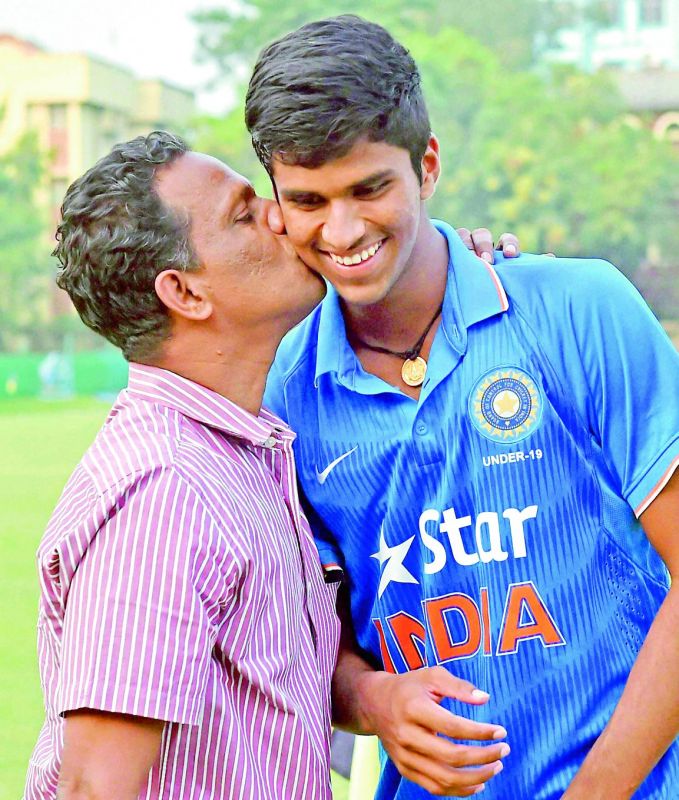 Against Mumbai Indians, Washington scalped three big fish in Rohit Sharma, Ambati Rayudu and Kieron Pollard to turn the match on its head. And the way he spoke to Sanjay Manjrekar at the post-match ceremony to collect his man of the match award, suggested his feet are firmly grounded despite his rising stakes. “It was heartening to perform for my side on such a big occasion in front of a packed crowd. Smith has been supportive. I have to thank him for giving me an opportunity to play ten games in my rookie season. I don’t think any other team would have been willing to do that,” added Washington, who represented India in the 2016 U-19 World Cup. A little less known fact about this youngster is that he played TNCA first division league at the age of 12.

Washington, whose sister, M.S. Shailaja, represented Tamil Nadu women’s team, doesn’t fail to acknowledge the role of his parents in shaping his career. “Whenever I step onto the ground, I know they would be praying for me,” said the youngster, whose father was his first coach, and has had the privilege of being a school teammate of W V Raman. Smith was generous in his praise for Washington. “What an unbelievable performance by a 17-year-old on the big stage. I throw him the ball in the first six overs when the batsmen are going after him and he takes three. I am proud of him and it was great watching him bowl so well. Hopefully, we can see one more big game in the final and lift that trophy,” he said.