The first All-Star Game outside the US was the highest-scoring ever, with both teams scoring more than any team had ever managed. Bryant didn't provide much of the offense but many of the memories. (Photo: NBA Entertainment)

Toronto: Legendary LA Lakers star Kobe Bryant’s final appearance in his NBA All-Star game was nothing short of a grand spectacle. The next generation of the West's best sent him off a winner, rolling to a record-setting 196-173 victory over the East on Sunday night.

Kobe understood that this was the last time he would feature at the main event. “No, I'm happy. This is pretty cool. I'm looking around the room and seeing guys that I'm playing with that are tearing the league up that were like four during my first All-Star game.

“It's true. I mean, how many players can say they've played 20 years and actually have seen the game go through three, four generations, you know what I mean? It's not sad at all. I mean, I'm really happy and honoured to be here and see this,” he said.

The first All-Star Game outside the US was the highest-scoring ever, with both teams scoring more than any team had ever managed. Bryant didn't provide much of the offense but many of the memories.

Allen Iverson and Shaquille O'Neal were announced as the finalists for the Hall of Fame and Bryant, who shares a close association with Shaq lauded their contributions to the sport. 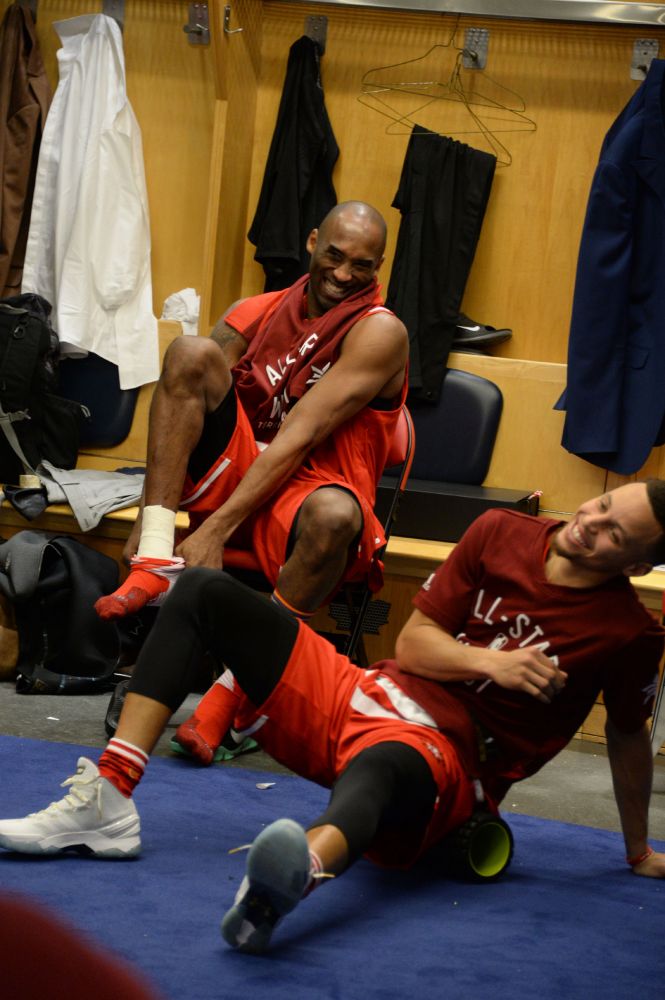 “Yeah, Shaq obviously on a more personal level, having played together for so many years and winning three championships, right, and all that he's meant to the game, and meant to me personally.

“And AI as a competitor, he drove me to be as obsessive, more obsessive about the game, because I had to figure out how to solve that problem, you know? And I told him -- I saw him here this weekend. I said you don't realise how much you pushed me. And I don't think people nowadays realise how great you were as a player and how big of a problem you were for defenses. Happy for them both,” Bryant quipped.

So what was it like playing in his last All-Star game? “It was fun. I had a blast playing with those guys, laughing and joking with them on the bench. And, you know, I got a chance to stop Pau (Gasol) in a post, redeem myself from what he did to me when Chicago came to town. But all those things are just fun. I had a great time. I had a great, great time.”

Bryant featured in his last game for LA Lakers against Dirk Nowitzki and Dallas Mavericks. The legendary hoopster called Dirk the Michael Jordan of the generation.

“I'll tell you a story about Dirk. He was up for free agency, and I knew what his response was going to be. But out of respect, everybody's looking around at all these free agents, I felt I'd shoot you a text, if you want to come to LA. He goes, I would love to play with you, but Dallas is my home. This is my team. I'm not leaving here. So he and I think a lot alike in that regard.”

Bryant has signed off a great career. The fight is over, and there are 27 Lakers games left for him. What’s the retirement life going to be like?

“I'll probably wake up and have some coffee and go back to sleep,” he guffawed.

But nonetheless, the greatest basketball stars let out on a secret on how dreams can be achieved.

“I think you have to believe that they're possible. It's easier said than done, because I think we all have dreams. But once you go through the process of trying to make those dreams a reality, you hit obstacles.

“And I think unfortunately because of pressure or anxiety or responsibilities, things, whatever, you kind of give up on those dreams and somewhere along the line you lose that imagination. I think it's important that you never lose that. You have to keep that. That's the most important thing. I never gave up my dream,” he signed off.

■Cleveland Cavaliers rally to victory
■Satnam Singh has made the dream of playing NBA tangible for Indian players: Briann January