Hyderabad: A miscreant has hacked Hyderabad shuttler N. Sikki Reddy’s Instagram account and is demanding $700 to let her have it back. 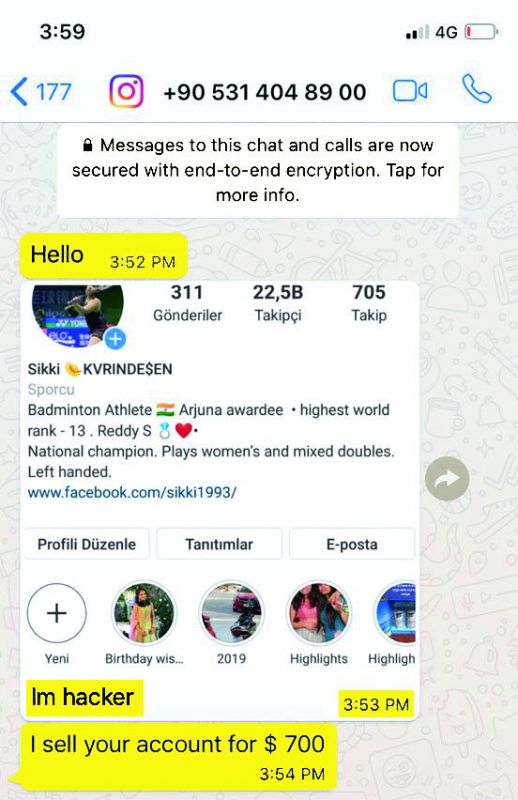 “I got this message this afternoon but had an evening session of practice to attend,” Sikki, who won the Arjuna Award last year, told Deccan Chronicle exclusively.

“What the hell! I just can’t comprehend how he got my email ID and phone number,” a bemused Sikki blurted out.

A startled Sikki reported the incident to Instagram, an employee of which has promised to fix the issue in a couple of days, “for a sum”. She hasn’t gone to the police as she “doesn’t have the time to file an FIR and pursue it”.

Reason: she is leaving on Saturday afternoon for the China Open, a BWF World Tour Super 1000 tournament, to be played in Changzhou from September 17 to 22.

The hacker did not mention how he wants the money to be transferred to him, in cash or crypto currency. A shaken Sikki didn’t dare to ask either. “I was taken aback and simply didn’t want to reply, more so on the advise of the Instagram staffer, who has promised to help me get out of this mess,” she said.

She fears her private conversations with fellow badminton player and world champion P. V. Sindhu and others might be at risk of being posted online. “I am worried about some personal conversations with friends. Myself and Sindhu spend a lot of time communicating with each other on Instagram. We wouldn’t want everything coming out in the open,” she said. “The hacker has even messaged Ashwini (Ponnappa, her doubles partner) on Instagram posing as me and asked her for her number. Ashwini was confused as to why ever would I not have it and called me regarding the same,” Sikki added.

The strike is perceived as a Ransomware attack, which usually targets big companies and famous personalities and threatens them after hijacking their accounts.

At the China Open, Sikki will compete in women’s doubles alongside Ashwini Ponnappa and mixed doubles with Pranaav Jerry Chopra as her partner.