The Chennai voice of Formula 1

Karun Chandhok with his wife Akshara and son Kushant.

It came as no surprise when Karun Chandhok turned full-time Formula 1 pundit in 2015 even though he had slowed down his racing career a bit earlier than expected. After all, Karun has always been adept at breaking down the intricacies of, arguably, one of the most complicated and technologically advanced sports, and narrating it in the common man’s language.

Karun, who has made a swift transition from a race driver to a highly-respected Formula 1 commentator, talks about his journey, fatherhood and why he doesn’t want his son to be a racer. 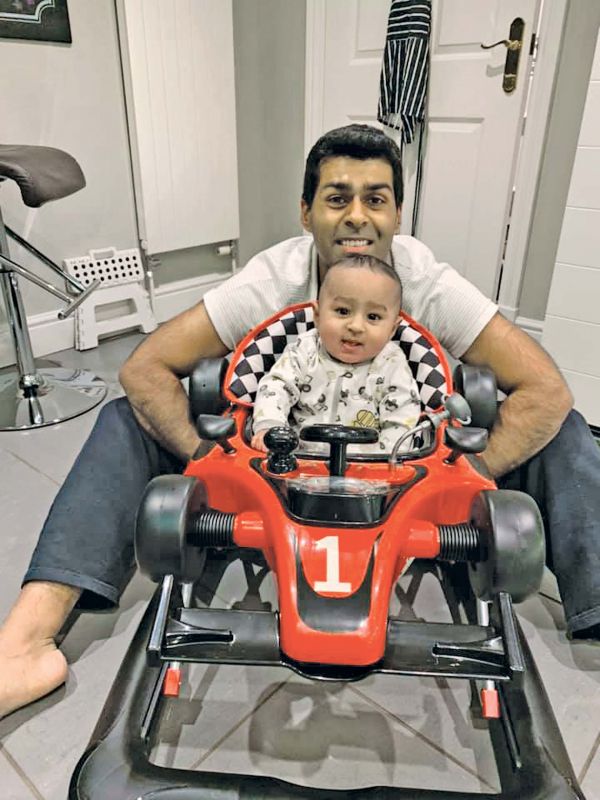 Karun Chandhok with his son.

The 35-year-old is now one of the most sought-after commentators and a highly-respected figure in the F1 paddock. “It’s earned over a period of time. I have been doing F1 commentary, on and off, since 2004. So far, I have worked with five global broadcasters. To be in the same panel alongside F1 champions such as Jenson Button, Nico Rosberg and Damon Hill is a great honour,” said Karun who is currently with Sky Sports.

As Karun grew up reading Autosport, considered the Bible of motorsport, and watched recorded tapes of Grands Prix shipped in from the UK, he developed a unique perspective with technical, strategic and historical knowledge of the sport in equal measure.

“The first-ever race broadcast in India was the Spanish GP in 1993, so people are quite surprised when I talk about what happened in the ‘60s and ‘70s. Last week in Hungary, when I was having lunch with Hill, I was telling a story about him that he himself had forgotten. Growing up, Hill was one of my heroes.

Now I feel happy when people like him respect me for my knowledge. The fact that they seek my opinion means a lot to me,” added Karun.

Apart from his commentary duty, Karun works with a circuit designing company, remains an integral member of the race drivers’ commission and is also involved with the heritage car division of the Williams.   “I made sure that I got my diary full. Working with Williams gives me a chance to indulge in my first love — driving. I am still travelling 26 weeks a year and living out of a suitcase,” said Karun.

Karun shifted his base to the UK when he was just 18 and currently lives in Beaconsfield, a picturesque town in a London suburb, with his wife Akshara and eight-month-old son Kushant. “I definitely miss being with my dad and mom in Chennai. But in terms of motorsport, UK is the best place to be in,” said Karun.

Fatherhood has given him a new perspective on life, but Karun said he’s no different from other fathers when it comes to juggling profession and family life. “We don’t have the luxury of raising the child with grandparents’ supervision. It teaches you the importance of sacrifice and of spending quality time with family. When it’s my turn to babysit or to read to him at bedtime, it doesn’t matter if the phone calls keep coming. I don’t answer them,” said Karun.

Coming from India’s first family of motorsport, Karun’s life always revolved around automobiles. Karun’s grandfather, Indu Chandok, is one of the founders of the Madras Motor Sports Club. His father, Vicky, raced alongside the likes of Vijay Mallya and S. Karivaradhan in Sholavaram before making a name for himself as an administrator. Karun’s brother Suhail dabbled with cricket and cinema before becoming a commentator.

Given his family lineage, Karun’s son is expected to be a sportsperson or a media personality. “I hope he doesn’t say ‘car’ as his first word like I had done,” he said. Karun also said he wouldn’t want his son to become a race driver. “Having spent the last 20 years in the sport, I know how difficult the life of a professional racer is,” he said. “Maybe, a race engineer is better. I think the world needs a lot of engineers,” he laughed.