Anushka Sharma taught me how to be poised: Virat Kohli

Virat Kohli poured his heart out on the latest episode of Breakfast with Champions, with Gaurav Kapur. From his career to his relationship with Anushka Sharma, he bares it all.

He describes Hardik Pandya as the most lost guy he’s ever met. “Usually, Punjabi songs are played in the dressing room. My iPod has mostly Punjabi songs and a few Hindi romantic numbers. But Hardik carries his own iPod and listens to English songs. He doesn’t know even five words of the songs, but he grooves to the beats. We get irritated with his songs! He has got a great heart, but he will say just anything. He once referred to Ravichandran Ashwin as Ravikashyap Ashwin.”

The fuss about Rohit Sharma

“There was a time when Rohit Sharma was the most-talked-about player. We were young players as well and would wonder why people didn’t talk about us. Then I saw him batting during the T20 World Cup and never said a word after that. Rohit is the most forgetful person. He’s misplaced his iPad and passport quite a few times. Now, our logistical manager texts us to make sure Rohit has everything, only then the bus moves.”

“Talking about a teammate, Shikhar once told me, ‘This boy is always trying to get into the notebooks.’ What he meant was good books. I told him, ‘looks like you didn’t touch one notebook in school’.”

The pressure of it all

“I have woken up feeling a sense of detachment from what I am doing due to the pressures I felt during a difficult phase. But I convinced myself to go out and try once more. The day that ends, nobody can convince you. Now, the motivation is just about winning. The day there is no passion, I’ll stop playing.

Not a single cheer

He shares a disappointing incident. “I walked in after Sachin Tendulkar got out during the World Cup final and nobody was cheering. Either the crowd forgot they were in India or they saw me as the no. 11 batsman.”

What others make of him

“It was difficult to get over being judged for my image — tattoos, studs, gelled hair. People had a problem with it. They deemed me as flamboyant and flashy. I was checking Instagram during one of the matches and Anushka said ‘Why do you want to see what people are saying about you? You can post things. But you don’t have to see the comments.’ I have now decided to stay away from social media.

The love of his life

“Anushka has taught me a lot over the last four years including how to be poised and how to utilise my position. She motivated me during my difficult phase when I wasn’t in the best form. And later, I ended up scoring runs. So it was a special thing for both of us.”

“When I was going through a rough patch, people said, ‘This is what happens when you allow girlfriends on tour’. I confided in Zaheer Khan and he told me not to hide the relationship. Because it was stressful to hide it and also because it wasn’t a crime. However, Anushka and I are still not very vocal about it. We don’t even converse on social media.” 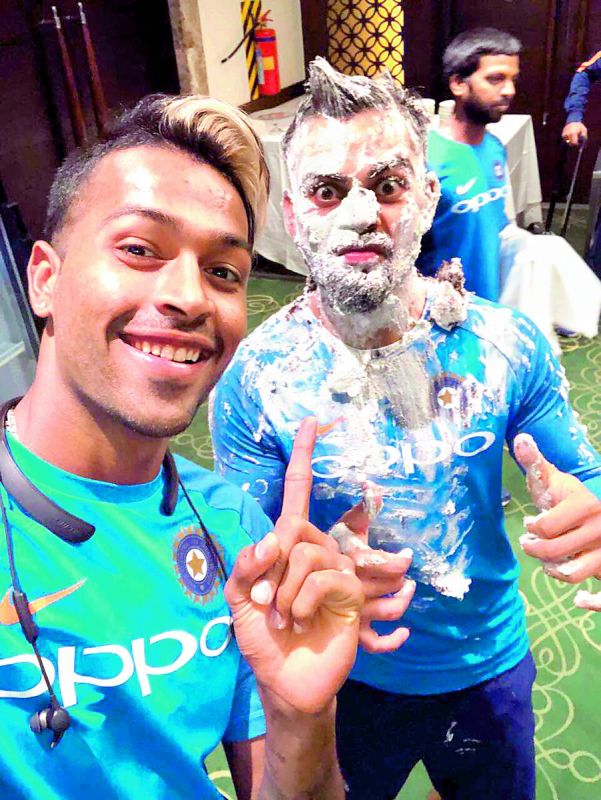 Hardik Pandya shared a picture with Virat Kohli on his birthday

Many celebs took to social media to wish the Indian cricket captain on his 29th birthday. Team India members took great joy in putting cake all over Virat’s face and body, and Hardik Pandya shared a picture with the captain, captioning it, “Revenge no. 1. Happy birthday, skipper (sic).”