Bouldering their way up

With sport climbing set to make its debut at the Olympic Games in 2018, we spoke to a few climbers from the city to know more about bouldering

Bouldering is a new adventure sport that has opened sport climbing to a far wider group of participants and spectators. It requires no ropes because it centers on short climbs, usually up to 18 feet and lasting no more than five minutes. In many places, it is also easier to find a low rock to climb than it is to find a giant cliff. “Rock climbing is the art of climbing vertical rocks with the help of various safety equipment like crash pads, ropes and harnesses. The sport came into the limelight in the early 1970s and has grown in popularity across the globe. In the past couple of decades, India is slowly and steadily establishing rock climbing spots across the country, like Hampi and Badami in Karnataka, Pune in Maharastra and Chatru in Manali to name a few,” says Ananth Krishnan, GHAC Hyderabad Climbers.

Bouldering as a sport unto itself has clearly been growing. Akun Sabharwal, Excise Enforcement Director, has done bouldering partly on an artificial boulder formation in Uttarkashi as well as on natural formations in Dekla in Garhwal Himalayas and Nalgonda. 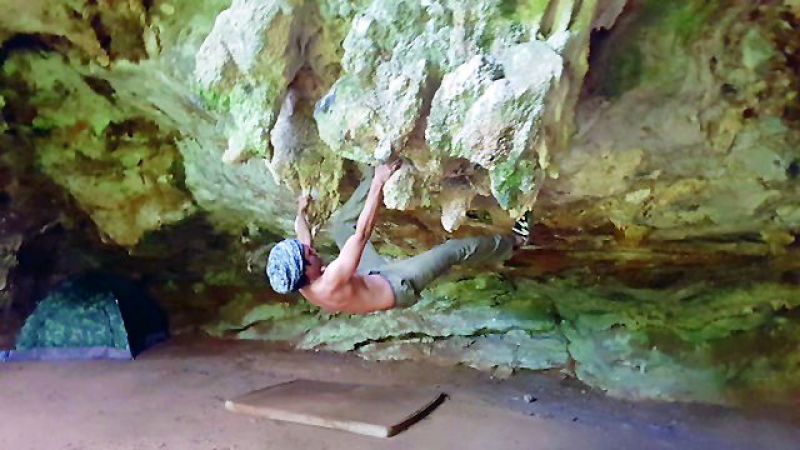 A rock climbing enthusiast making his way up the rough terrain

“It’s a challenging exercise and this time it’s part of the Asian games too,” says Akun. Elaborating on the adventure sport, Akun says, “There are different angles and names in rock terminology. Up to 30 degrees rock face is called glacier, 30 to 75 it’s slab, 70 to 90 degrees vertical is called wall, 90 to 120 is over hang and anything above that is ceiling

It has a lot to do with foot and hand hold, with a lot of safety involved.”

Rock climbing was introduced in Hyderabad around five to six years ago when a bunch of people decided to explore the amazing rock structures around the city. After climbing at a few spots within the city like Durgam Cheruvu, Maula Ali and Tirumulgherry, they quickly realised Khajaguda (Fakiruddin Gutta) near Lanco Hills offers some of the best climbing opportunities.

“Since then, a small climbing community of around four to five climbers has evolved to sport climbing routes, which involves climbing rocks above 20ft and up to 100ft with the help of ropes, harnesses, etc. and multi pitch climbing, which involves climbing mega rock structures of more than 200ft up to a 1,000ft. We have also climbed in several countries like Japan, Vietnam, Thailand and Europe,” says Ananth.

Not only does rock climbing provide physical benefits, it can be beneficial to the brain and mental health too; rock climbing is known to reduce stress and have positive outcomes on mental strength.

“Bouldering is a form of moving meditation performed with utmost presence of mind and pushes your physical limits in very short time bursts, typically under 12 seconds. This needs to be repeated over and over again with the same energy. Hyderabad’s granite boulders are very unique and most importantly, within the city to access anytime, unlike other metro cities,” says Ranga Vutukuru, GHAC Hyderabad Climbers.