"Arguably the issue that has frustrated me the most over the past couple of months has been the mistreatment from the DFB, and in particular the DFB President Richard Grindel," Mesut Ozil said in a four-page statement sent out in three images on Twitter and Instagram. (Photo: AFP)

Berlin: Mesut Ozil said Sunday he was quitting the German national football team, citing "racism" in the criticism of him after the side's World Cup debacle.

Ozil, who has Turkish roots, had been under fire since posing for a controversial photograph with Turkish President Recep Tayyip Erdogan in May which sparked questions about his loyalty to Germany's squad ahead of the tournament in Russia.

In a four-page statement sent out in three images on Twitter and Instagram, an angry Ozil saved his bombshell for the final salvo.

The past couple of weeks have given me time to reflect, and time to think over the events of the last few months. Consequently, I want to share my thoughts and feelings about what has happened. pic.twitter.com/WpWrlHxx74

"It is with a heavy heart and after much consideration that because of recent events, I will no longer be playing for Germany at international level whilst I have this feeling of racism and disrespect," he said.

The Arsenal midfielder blamed the German Football Federation (DFB) for failing to defend him against his most strident critics.

"Arguably the issue that has frustrated me the most over the past couple of months has been the mistreatment from the DFB, and in particular the DFB President Richard Grindel," he said.

He said that Grindel and Germany coach Joachim Loew had asked him to give a "joint statement to end all the talk and set the record straight" over the picture with Erdogan. 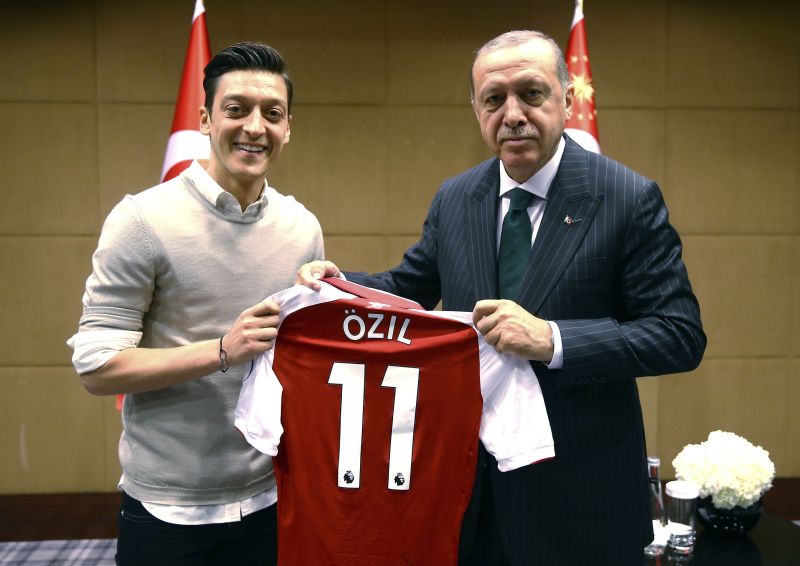 "Whilst I attempted to explain to Grindel my heritage, ancestry and therefore reasoning behind the photo, he was far more interested in speaking about his own political views and belittling my opinion."

Ozil, 29, said he had been unfairly blamed in Germany for the side's shock first-round defeat at the World Cup.

"I will no longer stand for being a scapegoat for his (Grindel's) incompetence and inability to do his job properly," he said.

"In the eyes of Grindel and his supporters, I am German when we win, but I am an immigrant when we lose."

Ozil had said earlier that he was true to both his Turkish and German origins and insisted he did not intend to make a political statement by appearing with Erdogan.

'I have two hearts':

"Like many people, my ancestry traces back to more than one country. Whilst I grew up in Germany, my family background has its roots firmly based in Turkey," he said.

"I have two hearts, one German and one Turkish."

Ozil said that despite the timing of the picture with teammate Ilkay Gundogan and Erdogan -- shortly before the president won re-election in a poll endowing him with sweeping new powers -- "it wasn't about politics or elections, it was about me respecting the highest office of my family's country". 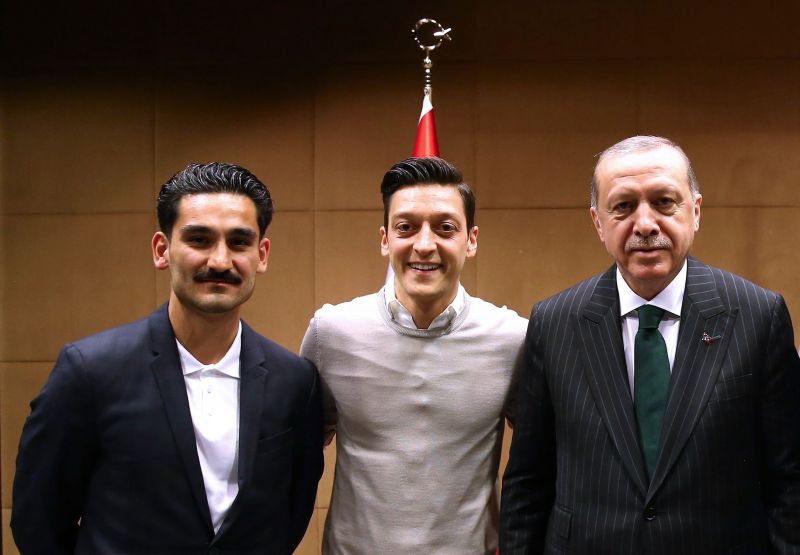 "My job is a football player and not a politician, and our meeting was not an endorsement of any policies," Ozil added.

Germany is home to more than three million people of Turkish origin.

Manchester City midfielder Gundogan presented Erdogan with a signed club shirt on which he had written "to my president".

The two players were booed by German fans in pre-World Cup friendlies over their appearance with the Turkish strongman, and Ozil said Sunday that he had his family had received threats.

After the tournament, Ozil came in for stinging criticism by DFB officials and German politicians across the spectrum.

Ozil said he could abide criticism of his performance on the pitch but not when it was linked to his ethnic background.

"If a newspaper or pundit finds fault in a game I play in, then I can accept this," he said.

"But what I can't accept are German media outlets repeatedly blaming my dual-heritage and a simple picture for a bad World Cup on behalf of an entire squad," he added, calling it "right-wing propaganda".

"This crosses a personal line that should never be crossed, as newspapers try to turn the nation of Germany against me."

He also furiously denounced disparaging remarks by former captain Lothar Matthaeus, who he noted "met with another world leader a few days back and received almost no media criticism" in an apparent reference to an appearance with Russian President Vladimir Putin.

And Ozil railed against an unnamed sponsor, which, he said, removed him from promotional videos for the World Cup after the pictures with Erdogan emerged.

"For them, it was no longer good to be seen with me and (they) called the situation 'crisis management'," he said.