Win or lose, he leads the charge when it comes applauding the crowd. And in his own way, he greets the thousands who come to watch him by joining his hands. (Photo: PTI)

He single-handedly shoulders the responsibility of the entire nation. You can hear every heart pounding when he takes the field. When he is on the ball, there is no taking your eyes off him and when he scores, fans scream on top of their lungs.

There is no other like Sunil Chhetri when it comes to Indian football. No fancy haircuts, no flashy tattoos or the pretentious swagger. His humility is what makes Sunil Chhetri, Sunil Chhetri himself. Win or lose, he leads the charge when it comes applauding the crowd. And in his own way, he greets the thousands who come to watch him by joining his hands. 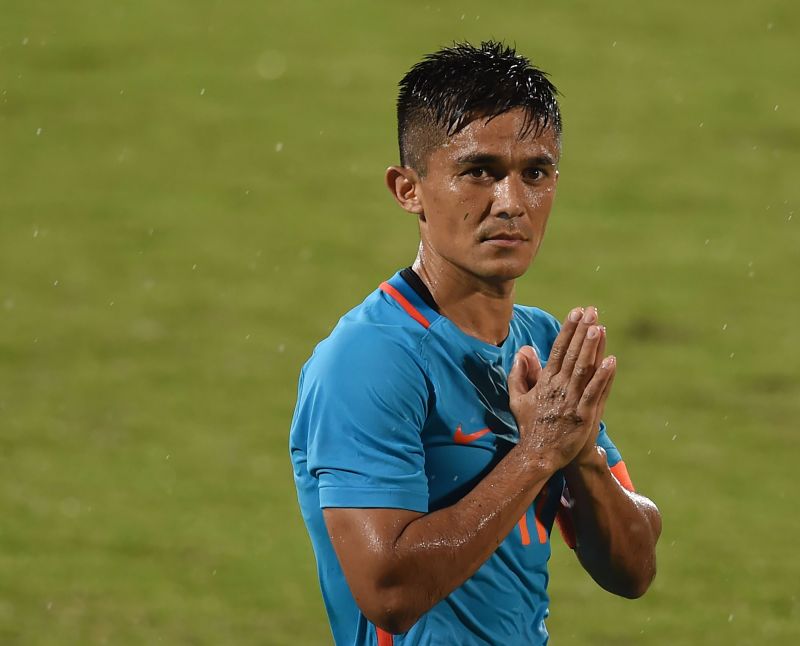 “It is just a way of saying thank you in an Indian way for coming out and supporting us. Be it the club or country, whenever fans come and support us I really feel appreciated and encouraged,” the Indian football team skipper says.

Chhetri was unveiled as the brand ambassador of StarPick, an online fantasy sports platform for World Cup Football 2018. It gives gamers a chance to step into a manager's shoes and build a virtual team using their own knowledge and skills.

The clock is ticking but the poster boy of Indian football shows no signs of stopping yet. Just a week ago, he equalled the legendary Lionel Messi as the second highest joint active international goal scorer, only second to Cristiano Ronaldo which is no mean feat. And just like fine wine, Chhetri is getting better with age.

The diminutive forward attributes his sharpness on the football field to a strict diet and workout regimen.

“I am very strict about what I eat. I do not consume anything that my body does not require. It takes a lot of sacrifice and discipline. It wasn’t easy before but now its second nature for me. I take my sleep very, very important. Working out is really easy, cause all it takes is two hours. Maintaining your body for the next 22 hours is really difficult. We as Indians take a lot of liberties, our food habits are not that great. Thankfully, as you grow older, you realize it. So I consume more of what I need and less of what I want. That is one of the main mantras. You have no idea how much food and sleep can affect you as a sportsperson. That is why I don’t take it for granted and work really hard on that,” he shares. 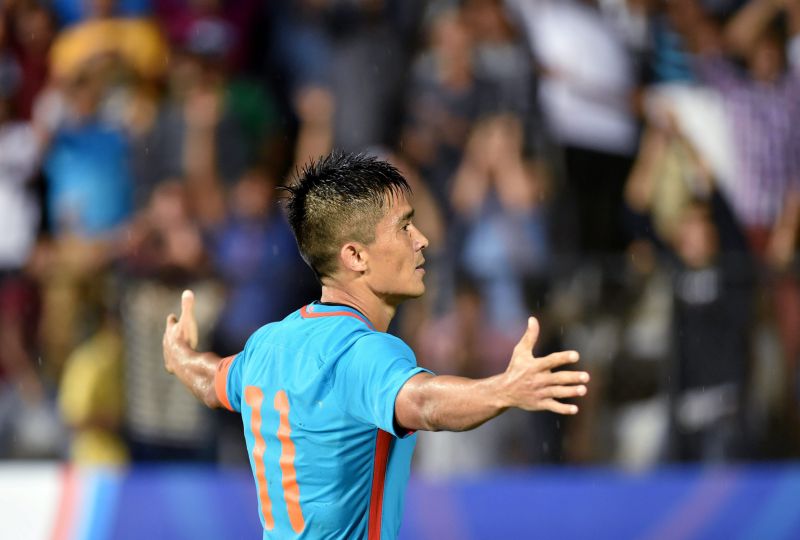 One of Chhetri’s key attributes to success has been his calm endeavour,  something that he has been working towards equally hard off the field.

“It is just the sport that teaches me to stay calm. I have worked really hard on myself and since I have crossed thirty, I have understood what exactly works for me. I don’t do a lot of things that is not needed in my life. For example, the food, the sleep, people you mix with. All these factors come into consideration. So I ensure that I do the right things and surround myself with the right kind of people, “ he explains.

When he burst onto the scene almost 16 years ago in the I-League (India’s top-tier football league back then), it did not take long before everyone took note of his talent. The dedicated lad from Secunderabad was destined for bigger things. 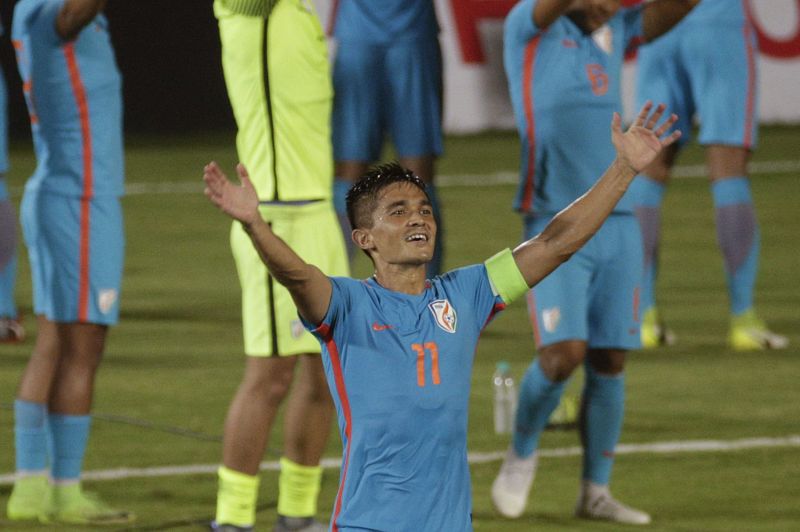 Fate, however, had other plans in store. After deals with English Premier League sides Coventry City and Queens Park Rangers failed to materalize, he tried his luck in the Major League Soccer (MLS) with Kansas City Wizards but struggled for minutes there. A twist of turn to Portuguese shores with the Sporting Lisbon reserves followed but nothing changed. Chhetri looks back with no regrets, whatsoever.

“I have no regrets. I endured a lot of rough patches because of injuries, poor form and it happens to everyone. But every time I was down, I knew exactly what I wanted in life. I love this game. I wanted to get back and do well. And that is what motivates you.  As you get older you understand it happens and you have to shrug it off and make sure you stay positive because things are going to chance. I tried my best in every phase of my career and I don’t hold on to anything,” he recalls.

Denied breakfast on time one fine morning, Chhetri recently made an inadvertent emotional plea on social media, that would go on to inject exuberance in Indian football’s fandom.

“My appeal was to those who watch foreign leagues to come and give us a chance. Give us a little time. At the end of the day, your country is playing. And things will change. Keep watching the La Ligas, the Premier Leagues and international football which is great, but also give a chance to domestic football. It was great that to see the response the video generated but moreover, it was satisfying to see the stadium packed. Every time India play, not only football but every other sport, I hope fans can go out and extend their support,” he explains.

It is impossible to repay Chhetri for what he has done for Indian football so far. He not only serves as a fine role model for generations to follow but also a true living example proving that humility, perseverance and hard work could get you anywhere. He might not be Messi, he might not be Ronaldo. But he is truly ours! 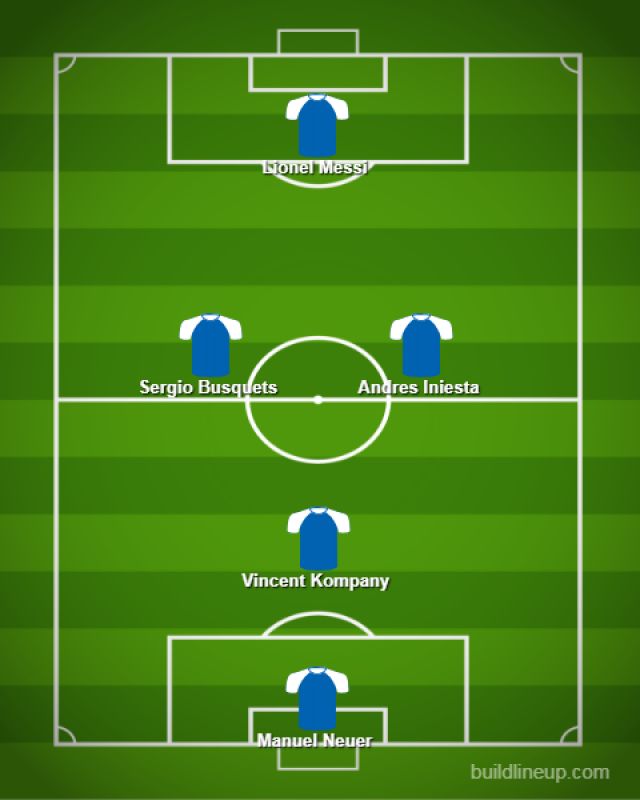 Time running out for Serie A return