New UEFA chief promises to stand up to big clubs

Aleksander Ceferin has promised to stand up to the big clubs. (Photo: AP)

Athens: Aleksander Ceferin, a little-known Slovenian football official, was elected as the head of European football’s governing body UEFA on Wednesday and promised to stand up to the big clubs.

“I am not a showman, I have no ego issues and I am not a man of unrealistic promises,” said Ceferin after the poll amongst Europe’s 55 national football associations.

Ceferin said his first task would be tackling widespread dissatisfaction at controversial changes to the Champions League agreed between UEFA and the European Club Association, which has 220 members from 53 FAs, in favour of the big clubs.

UEFA increased the number of places allocated to clubs from Spain, England, Germany and Italy in the lucrative group stage and cut the slots for the smaller countries. The move came amid threats that the big clubs could form a breakaway Super League.

“Whether I want it or not, I will have to deal with that and that will be the first thing to deal with,” Ceferin told reporters.

“UEFA is a very good and very strong organisation, it was without leadership for some time and I think that in a way was a problem in dealing with those things. We should show we are the ones who are the governing body with our 55 national associations, and at the same time we have to have dialogue with the clubs and I think the situation can be solved. 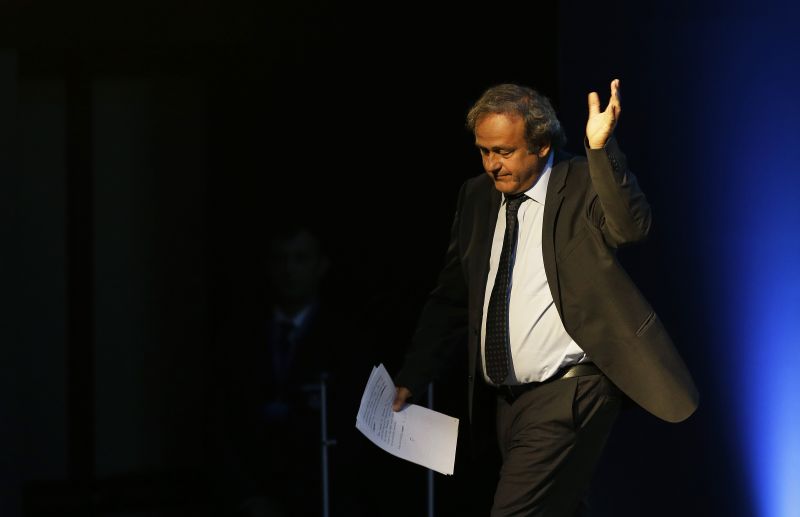 Michel Platini was given permission by FIFA's ethics committee to address the Congress. (Photo: AP)

Former France international Platini had governed UEFA since 2007 and been re-elected twice until he was banned by FIFA’s ethics committee last October for ethics violations.

He finally announced his resignation in May after exhausting all possibilities of appeal within the sporting tribunal system, allowing UEFA to call Wednesday’s election.

Despite his four-year ban, Platini was given permission by FIFA’s ethics committee to address the Congress as a “gesture of humanity”, and made a seven-minute speech.

“Thank you for these nine years. I think we did a great job… Friends of football, farewell,” said Platini, who was given a round of applause but not a standing ovation.

“I have a clear conscience, I am certain not to have made any mistake and will continue to fight this in the courts.”

Ceferin, who has crossed the Sahara desert four times by car and once on a motorbike, was elected president of Slovenia’s Football Federation in 2011 but was not internationally known until he announced he intended to stand in June.

Both candidates campaigned to help UEFA’s middle-sized and smaller members and said it was necessary to close the gap between big and small clubs, although Van Praag was more outspoken in Wednesday’s pre-vote speeches.

“I guarantee you, on my watch I will not allow the clubs to put the gun to our head again,” he had said.

“For many years, the million dollar deals have been restricted to the big clubs alone. I believe that top football is played by too few clubs in too few competitions in limited areas.”

After the result, Van Praag added: “Alex and myself have the same goal, look at our programmes. He wanted to do it his way and I wanted to do it my way and today democracy has spoken.”

Rahul Dravid destined to be the next Team India coach?

Brazil and Argentina clash in a soccer final for 5th time