New Delhi: Amarjit Kiyam-led Indian under-17 team suffered to yet another defeat on Monday as they lost to Colombia 2-1 in their second group game of the ongoing FIFA U-17 World Cup. This loss has come in as a big blow for the young Blue Tigers as they stare at the brink of elimination.

Despite witnessing a goaless first-half, the Indians showed grit and power as they came close to scoring goals thanks to a couple of shots on target, but failed to find the net.

Four minutes into the second half, it was Colombia's  Juan Penaloza who gave the lead for the visitors in the 49th minute.

From then on, it was the visitors who took control of the game, and never really gave India a chance for scoring a goal. In the 82nd minute, it was Jeakson for India who gave the hosts their first ever goal in a FIFA tournament, just for Penaloza to get the visitors back to the game, making it 2-1 in the 83rd minute.

In the end, it was yet another forgettable night for the hosts as the loss has put their hopes of qualifying to the next round in tatters.

India will now play Ghana in their last group game, while Colombia gets ready to face with USA, who have won both their matches so far.

83': Penazola strikes back just seconds after Jeakson's goal, to put visitors back in front.

46': The second half is underway! Who will score the first goal of the match?

45 + 1': Yet another miss for India as Rahul nearly sees the hosts through as the ball touches crossbar, but fails to find the net.

43': India's goalkeeper Dheeraj is consulted by physio as he is badly injured after collapsing to the ground. But, he is okay, and play resumes.

30': Both teams are yet to find the net, as the game nears half-time.

15': MISSED CHANCE! India's Abhijit races forward in order to find the net, as he tries to shoot on target, but is successfully defended by Colombia's goalkeeper.

10': No goals so far in this match, with this game getting off to a slow start.

1': The match is underway! Can the Blue Tigers win this game and stay in the hunt?

India have announced their line-up: 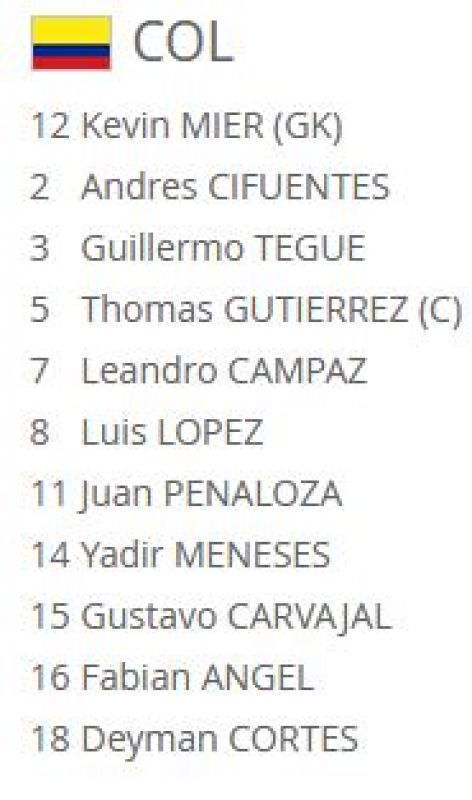 New Delhi: Amarjit Kiyam-led India U-17 football team will hope to get the ongoing FIFA U-17 World Cup up and running when the hosts take on Colombia at the Jawaharlal Nehru stadium here on Tuesday.

The Blue tigers had a forgettable night back on Friday as they suffered to a 3-0 loss to USA in their first ever FIFA U-17 World Cup match.

The two teams had earlier met in August during a four-nation tournament, where the latin American side emerged victorious 3-0. It was in the same tournament where they had lost to Mexico 5-1 and drawn with Chile 1-1India had a lot of chances to score a goal in the first match, but missed out on netting during that match. The young colts will hope to convert the chances to goals.

With opponents Colombia, too, having lost their first match to Ghana 1-0, both the teams will be eager to get their first points on board.

India’s right-back Boris Thangjam will be a boost for the hosts, after having missed the first match due to a suspension.