Barca invited Chapecoense to contest the traditional friendly, named after the club's Swiss founder, 10 days after the crash, offering half the proceeds from the game to the Brazilian club in addition to making a donation of 250,000 euros to help the club's reconstruction. (Photo: AP)

Barcelona: Barcelona's traditional curtain-raiser, the Joan Gamper Trophy, took on emotional significance with the visit on Monday of Chapecoense, the Brazilian team who lost most of their playing and coaching staff in an air crash last year.

The plane carrying Chapecoense to the Copa Sudamericana final, first leg against Atletico Nacional crashed into mountains outside Medellin, Colombia on Nov. 28 after running out of fuel, killing 71 of the 77 people on board.

Barca invited Chapecoense to contest the traditional friendly, named after the club's Swiss founder, 10 days after the crash, offering half the proceeds from the game to the Brazilian club in addition to making a donation of 250,000 euros ($294,875.00) to help the club's reconstruction.

The players who survived the crash - Helio Neto, Jakson Follmann and Alan Ruschel - were given a separate tribute as they walked out of the tunnel at the Nou Camp after the teams emerged, while volunteers held up a heart-shaped banner in Chapecoense's green and white colours. 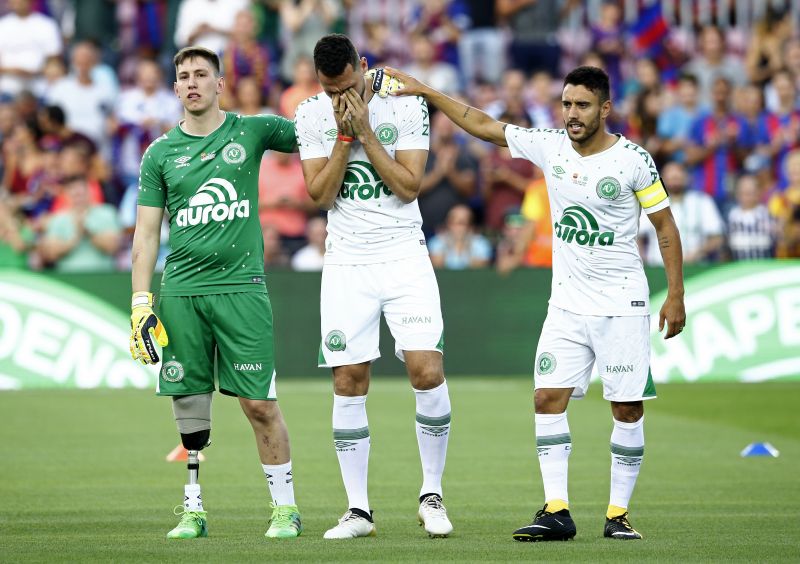 Chapecoense players Jakson Follmann (left), Helio Neto (Centre) and Alan Ruschel - were given a separate tribute as they walked out of the tunnel

"It's an honour to receive Chapecoense for everything they have been through, they can count on our solidarity," said Barca coach Ernesto Valverde before the game, his first at the Nou Camp since succeeding Luis Enrique in June.

"Today is a special day, we are very happy to have you here and we hope it's an experience you never forget," added Barcelona captain Andres Iniesta.

Former goalkeeper Follmann, who had to have his leg amputated after the crash and wears a prosthetic leg to walk, took the honorary kick-off with defender Neto, who could not hold back the tears when he came out of the tunnel.

Neto required knee surgery and a gallbladder operation after the crash but has said he plans to return to playing next year.

Up in the stadium press box, Rafael Henzel, a journalist who survived the crash, commentated on the game.

Defender Ruschel was playing his second game since suffering spinal injuries in the crash and wore the captain's armband, kissing the Nou Camp turf before the game began and raising his hands to the air in tribute to his fallen team mates.

He only managed to play 35 minutes before being substituted and was given a standing ovation by the 64,705 supporters inside the stadium. He then swapped shirts with Lionel Messi when the five times world player of the year left the pitch at halftime.

"They deserve this day, they are heroes," said Deulofeu, who returned to his boyhood club in the transfer window after spells at Sevilla, Everton and AC Milan and had opened the scoring. "The truth is we all shed a tear for them after the disaster."