Nizamabad girl Guguloth Soumya has been scoring some big wins. The 17-year-old is truly an inspiration to the young girls in India who are passionate about football. Soumya has just returned from South Africa where she led the Indian women’s team at the BRICS (Brazil, Russia, India, China and South Africa) under-17 football tournament.

The young sportsperson never expected to helm the team. “I was a little surprised,” she says, adding, “It was a great opportunity and I was glad to lead this bunch.”

She may have come a long way in representing India in the under 14, 16 and 17 categories. But even this lethal striker of the junior women’s football team had to overcome prejudices before starting to play her beloved sport in 2012. 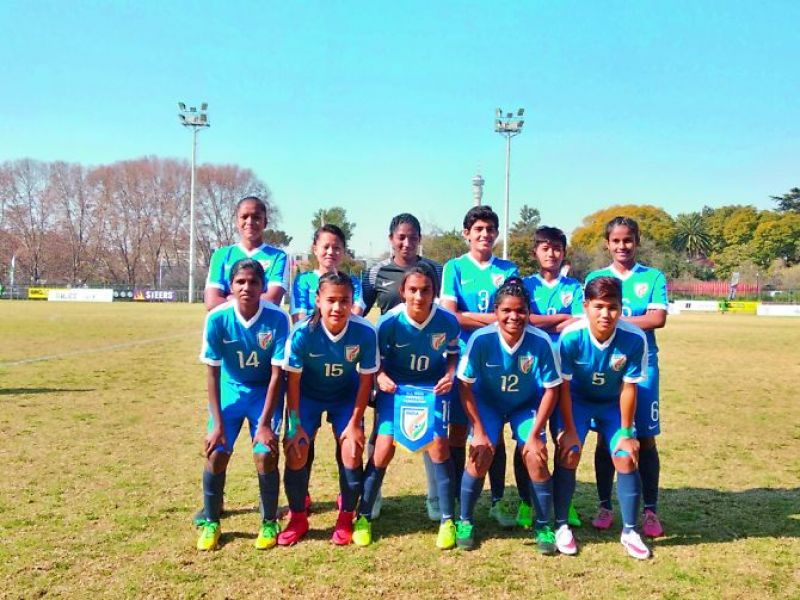 Soumya with her under 17 team.

“It was my football coach Nagaraj who spotted my talent when I was in class VII. That’s when I started playing the game. Since there weren’t many girls practising the sport, a lot of people discouraged me. I had to literally practise with boys. Balancing my studies and the sport was challenging too,” she adds, “My parents were initially apprehensive but after seeing my rapid strides in football, they grew more confident.”

Soumya, who is currently pursuing her first year of graduation, is a big fan of Portugal striker Cristiano Ronaldo. “I love his dribbling. His understanding of the game is brilliant. He has such quick feet and is one of the fastest players in the game,” she says.

Soumya describes the experience of playing in South Africa as ‘fantastic’. “Leading the country is always an honour. There were so many takeaways from the tour and it was a learning experience,” she shares, “We got an insight on how various countries prepare for their matches, their strategies and their approach to the game, etc. We also realised our team’s strength and focus areas, apart from learning how to play in other conditions.”

Interestingly, Soumya has the unique distinction of being the only footballer from the Telangana state to represent India Rush Soccer Club in the I-League for Women (in November 2017) — the World’s Largest Youth Soccer Club.

Recalling that experience, she says, “I did not expect that call and I was delighted to be part of the tournament. The call couldn’t have come at a better time and it helped me in preparing for the challenges ahead.”