Schweinsteiger has not featured since Jose Mourinho's pre-season arrival and was written off as an asset in the club's financial results. (Photo: AFP)

The 32-year-old has not featured since United manager Jose Mourinho's pre-season arrival and was written off as an asset in the club's financial results for the year ending June 30, 2016.

He was also omitted from United's Europa League squad, but pictures on the club's social media accounts showed him training with team-mates ahead of Thursday's match at Fenerbahce in the competition. 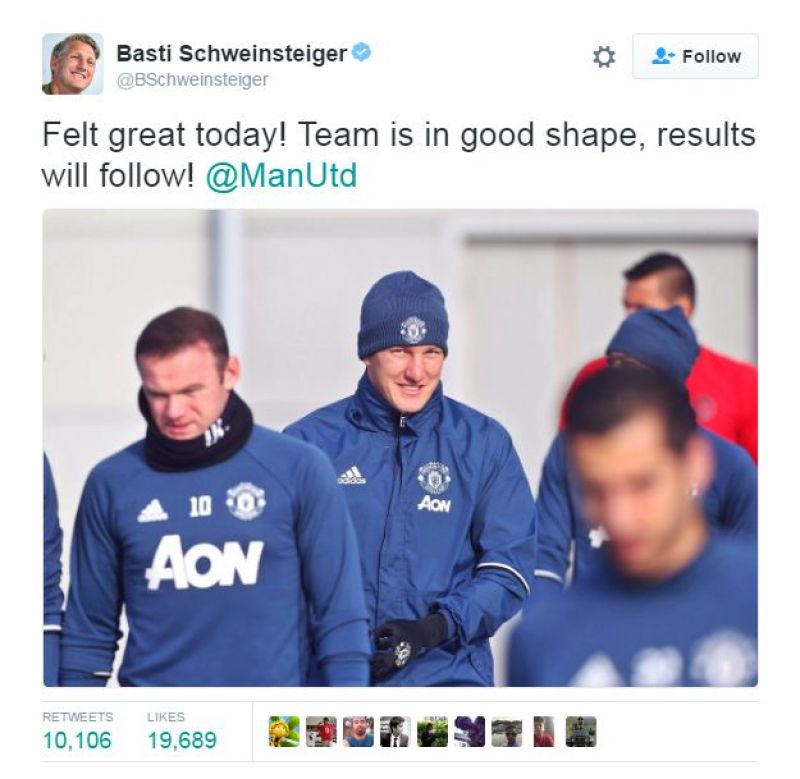 "It's great to see him back," Shaw said. "We found out the news a couple of days ago and it's so great to have him back. He's a big influence in the dressing room and obviously on the pitch, especially for the young players like myself.

"It's a great boost for us, the experience and the quality that he brings."

"Bastian's a great lad, speaks perfect English, has got great quality and vast experience," said Robson, who was speaking at the launch of a United deal with Chinese mattress firm Mlily.

"For me he could definitely help the group, on the confidence side and just the know-how on how to play the game in that central role. I still think he could be valuable to the squad."

Shaw was criticised by Mourinho after United's 3-1 defeat at Watford last month and, following a spell on the sidelines, was left out of the squad for their recent 4-0 defeat at Chelsea.

But he has started United's last two games, against Manchester City in the League Cup and Burnley in the Premier League, and says there are no issues between him and the manager.

"I was very unhappy to not be in the squad (against Chelsea), because I really wanted to play that game," said Shaw, whose team are currently eighth in the Premier League table.

"But at the end of the day it's the manager's decision. After the game I spoke with him about it and I 100 percent agreed with what he said and why I wasn't involved.

"Obviously we'll keep that between us two. But it's been really good the last couple of games. I've felt fitter and stronger."

United were held to a 0-0 draw by Burnley at Old Trafford on Saturday despite mustering 37 attempts on goal – their third successive league game without scoring.

Zlatan Ibrahimovic was particularly profligate and has now gone five games without scoring, but Shaw does not believe the Swede's famous self-confidence has been affected.

"No chance at all. I wouldn't say that," said the England left-back.

"He's a world-class player and I wouldn't say it's a dip. He's been unlucky. He's had chances, but the saves that have been happening from his shots are unbelievable, especially that volley he did at the weekend, with Heats (Burnley goalkeeper Tom Heaton) saving that.

"He's a very confident person and his confidence is always sky-high."

He added: "It's a shame we couldn't get the three points on Saturday, but we have to keep playing the way we're playing. The goals are going to come."

Embuldeniya strikes as Zimbabwe bowled out for 406

Ton by any Zimbabwe player is a huge achievement: Sean Williams' father

India becoming better and better away from home: Tim Southee