While Shikhar Dhawan was unhappy with Emirates for not letting his family travel with him, Kevin Pietersen was disappointed with the airline company misplacing his luggage.(Photo: AFP)

Dubai: India cricketer Shikhar Dhawan had recently expressed his disappointment over his wife and kids being stranded at Dubai airport, as Dhawan had to travel to Cape Town, South Africa without his family.

Similar woes for cricketers continued as former England cricketer Kevin Pietersen was furious after his luggage was misplaced by Emirates Airlines.
The 37-year-old took to Twitter to vent his anger. However, he had later deleted this particular tweet. 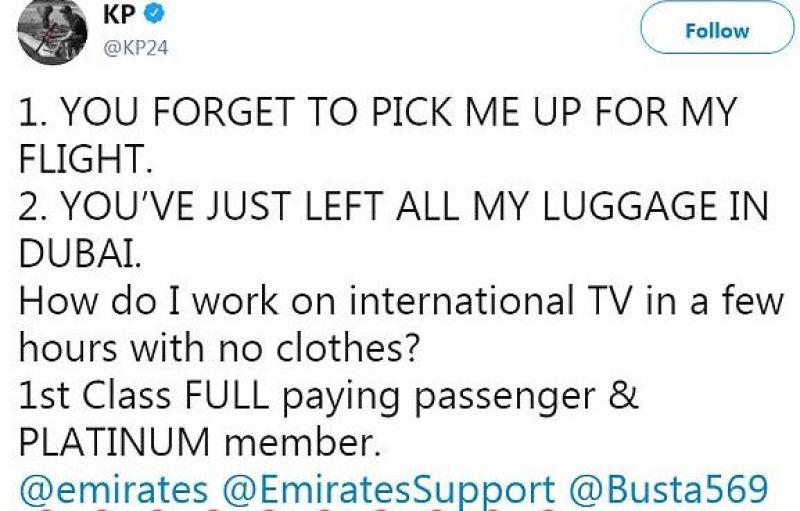 Pietersen was travelling from United Kingdom to Melbourne via Dubai after the Christmas break to take part in the ongoing Big Bash League, an annual T20 league in Australia. While Pietersen has been commentating in the tournament, he also has been playing for the Melbourne Stars.

The @emirates credit card ran out when I went to the socks counter...!
Gutted, but got some decent get up!
😂 pic.twitter.com/dP6gDaJ4rq

Dhawan had slammed the airline company, terming it as 'unproffessional'.

1/2.Absolutely unprofessional from @emirates. Was on my way 2 SA with my fam & was told tht my wife and kids can't board the flight from Dubai to SA. Was asked to produce birth certificates & other documents fr my kids at the airport which we obviously didn't have at that moment.

2/2.They are now at Dubai airport waiting for the documents to arrive. Why didn't @emirates notify about such a situation when we were boarding the plane from Mumbai? One of the emirates' employee was being rude for no reason at all.

The veteran had played for the BBL team in their first match against Brisbane Heat on December 20, scoring 10 runs in that game.

Melbourne Stars are struggling in seventh place after having lost both their opening matches.

The final of the tournament will be played on February 4.

Warne picks Tendulkar as batsman for all conditions, Steve Waugh as match saver

Strange that people are questioning those who are making donations: Ojha