Rahkeem Cornwall bowls on the opening day of the second Test at Kingston. (Photo: AP)

Kingston (Jamaica): India laboured their way to 72 for 2 under testing conditions after opener K. L. Rahul and Cheteshwar Pujara were dismissed cheaply in the opening session of the second World Test Championship match against the West Indies here on Saturday.

Rahul and Pujara were out for 13 and 6 respectively after India were put into bat on a Sabina Park pitch which had some grass on it.

Captain Virat Kohli and the other opener Mayank Agarwal were batting at 41 off 99 balls and 5 off 30 deliveries respectively at the lunch break. India faced 30 overs in the session. After West Indies captain Jason Holder opted to field, Rahul and Agarwal negotiated the first half an hour without taking any risk on a tricky pitch. 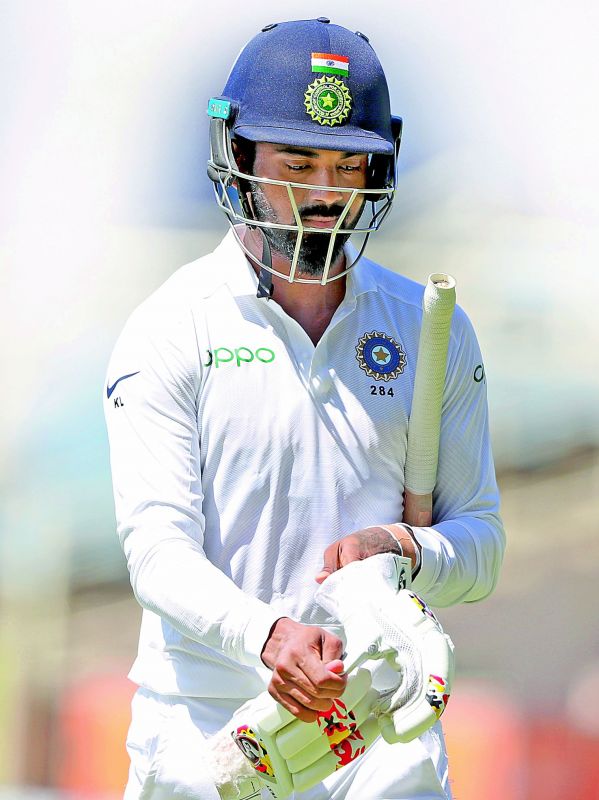 K. L. Rahul walks back to the pavilion after being dismissed for 13. (Photo: AP)

Opening bowlers Kemar Roach and Shannon Gabriel, however, could not get much movement from the pitch. Holder introduced himself in the seventh over and immediately got the breakthrough by having the wicket of Rahul to break the 32-run opening stand. It was a peach of a delivery which jagged away from middle stump with Rahul edging it to Rakheem Cornwall at first slip for a comfortable catch.

Rahul hit two fours in his 26-ball innings. Holder was getting the bounce and movement and debutant Cornwall made the Indians toil for runs with his tight off-spin bowling.

India were 36 for 1 in 13 overs at the drinks break. Pujara, who came after Rahul’s departure in the seventh over, struggled again as he took 15 deliveries to open his account and was finally out for 6 which came from 25 balls.

The bounce extracted by 26-year-old off-spinner Cornwall, who stands at 6ft and 5 inches and weights more than 140kg, did brought Pujara’s downfall as he hit straight to the hands of Shamarh Brooks.

India were 46 for 2 in the 17th over at the fall of Pujara but Kohli and Agarwal ensured that the visiting side do not lose any further wicket. The duo added 26 runs in 13.1 overs for the unbroken third wicket. Agarwal has so far hit five fours from the 99 balls, while Kohli’s 5 came from 30 deliveries.