Dubai: Indian Test captain Virat Kohli has moved up to a career-best third position in the latest ICC rankings for batsmen after leading his team to an eight-wicket win over England in Mohali.

Starting the five-Test series against England in 15th position, Kohli has risen at a fast pace, scoring 405 runs in three Tests so far. India currently lead the series 2-0.

The 28-year-old Kohli scored 62 and six not out in the recently-concluded third Test to move to 833 points.

Top-ranked in Twenty20 Internationals and second in One-Day Internationals, Kohli will look to improve his ranking further in the remaining two Test matches against England.

Another Indian batsman to figure in top-10 was Cheteshwar Pujara, who occupies the eighth spot in the table, headed by Australia captain Steve Smith.

England's Joe Root is at the second position, having 14 points more than Kohli. 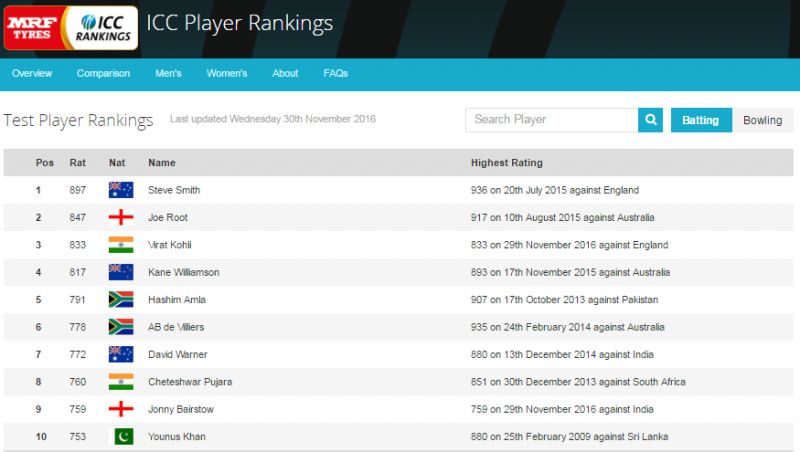 While Steve Smith is leading the ICC Test rankings for batsmen, Virat Kohli has taken huge strides to be amongst the top 3 batsmen in rankings. (Photo: Screengrab from ICC Website)

Meanwhile, India off-spinner Ravichandran Ashwin topped the charts in both the bowlers' and all-rounders' list.

Ashwin has consolidated his position at the top in the Test all-rounders' rankings with 493 points, a tally not reached by anyone since retired South Africa player Jacques Kallis in 2008.

Ashwin's spin partner Ravindra Jadeja is the other Indian to feature in the top-10 of both Test bowlers' and all-rounders' rankings.

While he is holding the seventh position in the bowlers' list, Jadeja has gained two slots to reach a career-best fourth as an all-rounder after scoring a crucial 90 in his only innings in Mohali.