You didn’t need a map to know where Virat Kohli was going to be on Friday afternoon. All you had to do was follow the sound of people screaming his name.
At the launch of the store Wrogn in the city where he also released a new range of footwear, Virat set the already high temperature a notch higher. “I still get very nervous with the adulation and attention I receive,” said Virat as the crowd kept screaming his name.

he added, “All the attention is overwhelming, but I am very thankful for it.” A usual Friday at the mall turned out to be one of the noisiest as fans of the cricketer refused to be quiet.

They screamed when Virat walked in, when he held the mic and obviously when he started to talk. As Kohli took his place on the stage, the balconies of all four floors were brimming with people, all trying to get a glimpse of the cricketer. Bouncers had a tough time controlling the fans. 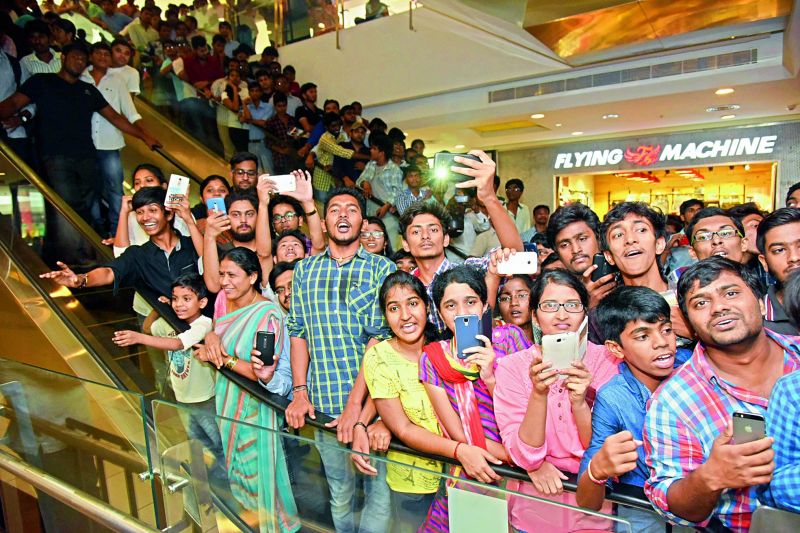 People go berserk trying to catch a glimpse of Virat

Wherever Kohli goes, so does controversy, but this time the Team India Test skipper played it smart when he avoided questions related to Salman Khan being appointed as the Goodwill Ambassador for the Indian Contingent for the upcoming Olympic Games in Rio de Janeiro.

“I’d rather not say anything. Look, my opinion will not change anything so how does what I feel about it matter? I’m not in a position to comment about it and I feel that any support is good,” he said.

With Wrogn, Virat is starting a new innings, that of an entrepreneur, and he’s kicked about it. “It feels great to be an entrepreneur and I hope we do make a change in the fashion scene everywhere,” he said.

Talking about fashion and the brand’s collection he said that the clothes were what he would wear. “This collection has my sense of styling and I’m sure it will have a connect with the youth. I’m very conscious about my fashion and I approve all the designs for Wrogn, also, my style is very casual.”

As Virat made his way to the store, his fans, of all age groups, made a mad rush. And where Virat goes, there has to be a mention of Anushka or at least Anushka herself. And yes, this time too she was. Except this Anushka was a pre-teen who was one of the hundreds of fans who came to catch a glimpse of her. “I bugged my brother’s to bring me here because I wanted to see Virat Kohli,” said the little fan who made it to Forum Mall, all the way from Begumpet.