Virat Kohli had a lot of praise in store for Cheteshwar Pujara, who was instrumental for India in the four-match Test seires against Australia. (Photo: AFP)

Mumbai: Virat Kohli may not want to be friends with the Aussies after an intensely-fought Border-Gavaskar Trophy, but the India captain showed that he is a completely different person with this teammates.

While Kohli was one of India’s best players during the home season, scoring 1,252 runs at an average of 65.89. However, Kohli has had a forgettable series against the Australians, averaging a paltry 9.2 in the three Tests he played in.

While Kohli was experiencing a dip in form, top order batsman Cheteshwar Pujara stepped up to the plate, scoring at a rate of 57.85.

After a gruesome loss to the Aussies in the Pune Test, the Indian cricketers had take a short hiking trip near Pune, in order to take their minds off the heavy defeat.

That might have been a long time back, but the Kohli recently posted a picture of himself with Pujara sitting on the top of a hill, as he congratulated his teammate for an excellent season. 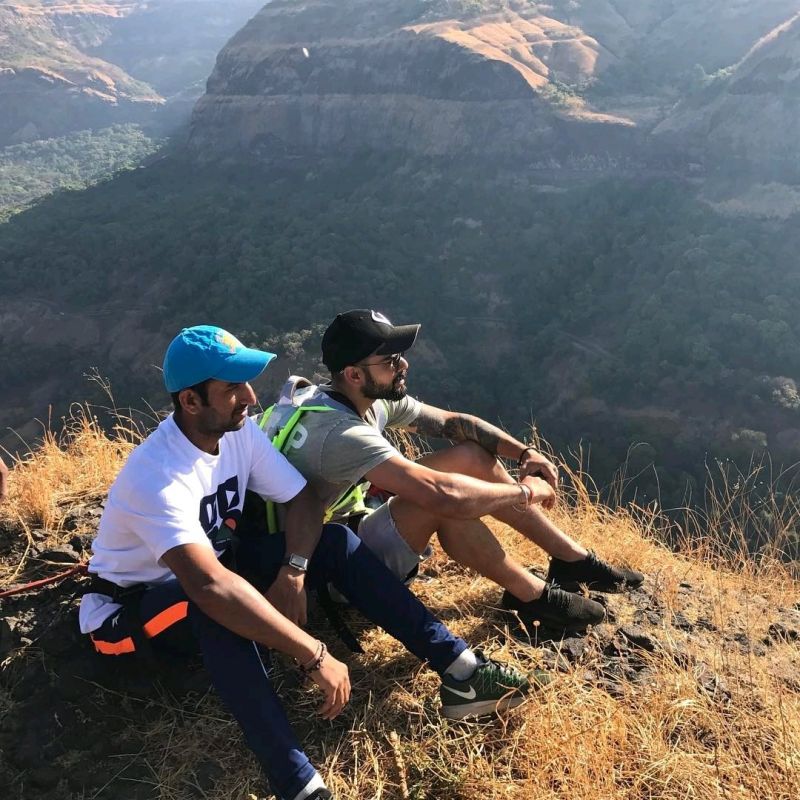 Virat Kohli and Cheteshwar Pujara have been instrumental for India in the 13 Test-long home season. (Photo: Virat Kohli/ Twitter)

“Really happy and delighted to see the grit and determination of this guy. Well done Puji @cheteshwar1 for an outstanding season brother,” Kohli wrote on his Twitter feed, along with the picture.

In return, Pujara also congratulated Kohli for leading the Indian cricket team to series victories against New Zealand, England, Bangladesh, and Australia, in the 13 Test-long home season – a feat that helped India achieve the no. 1 status in the ICC Test rankings.

“Thanks a lot @virat.kohli it was indeed a wonderful year for Team India. Very well done on your brilliant leadership and performance throughout the season. Lets continue giving our best to the nation for years to come,” wrote Pujara on Instagram.