"I take this opportunity to apologise to the people of India, cricket fans, the Indian national cricket team and particularly Virat Kohli for my previous comments," Brad Hodge posted to Twitter. (Photo: BCCI / AP)

Sydney: Former Australian international Brad Hodge Thursday apologised over suggestions firebrand Indian captain Virat Kohli pulled out of a Test match to save himself for the Indian Premier League.

Hodge came under fire on the subcontinent for his conjecture about Kohli's injury-enforced withdrawal from the deciding fourth Test against Australia, which ended on Tuesday.

"You'd hope as a sportsman that he's seriously injured," he told Fox Sports on Sunday.

"Because if you miss one game of Test match cricket and you're fronting up the next week for RCB (Royal Challengers Bangalore) versus whoever... you'd be pretty dirty if he didn't front up to a Test match and try and win a valuable series against Australia."

Hodge is due to coach the Gujarat Lions in the IPL, starting April 5, and has been rattled by the backlash, issuing a long apology.

"I take this opportunity to apologise to the people of India, cricket fans, the Indian national cricket team and particularly Virat Kohli for my previous comments," he posted to Twitter.

"My intention was never to harm, criticise or be derogatory toward anyone. They were intended to be light-hearted comments with the utmost respect to the Indian Premier League which I have thoroughly enjoyed through the years.

"The public and fans have every right to be upset, and the backlash I have received has certainly driven this home."

He said that he respected Kohli and meant no "ill intention". 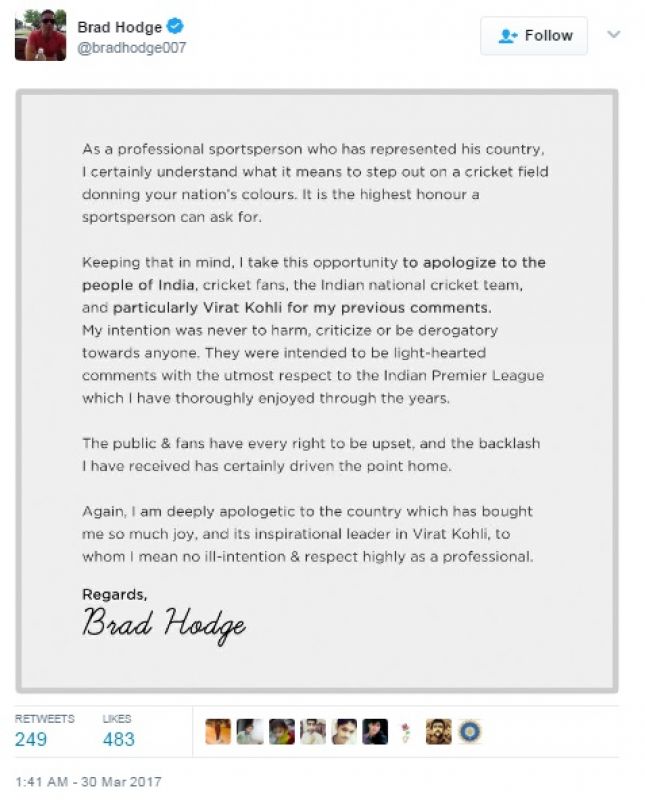 Kohli, captain of the Royal Challengers Bangalore, hurt his right shoulder while diving to stop a boundary during the drawn third Test against Australia in Ranchi.

He sat out the fourth and final Test in Dharamsala which India won by eight wickets to seal the series 2-1.

The 28-year-old said this week his shoulder was taking time to heal because it was not a simple stress injury but an impact injury.

Australia's Glenn Maxwell was also at the centre of controversy over Kohli's injury when he grabbed his shoulder in parody and grinned at his team-mates after making a similar stop later in the third Test.

Sports ministry gifts match tickets to those injured in stampede