Jayant Yadav sported number 22 jersey as he made his India debut against New Zealand in Vizag. (Photo: BCCI)

Vizag: Jayant Yadav will be a happy man after he made his debut for Team India in the fifth and final ODI against New Zealand in Vizag on Saturday. The Haryana off-spinner, who was picked India’s tour of Zimbabwe and brought in to replace Ishant Sharma during the Test series against New Zealand, replaced Hardik Pandya in the playing XI for the series-decider. 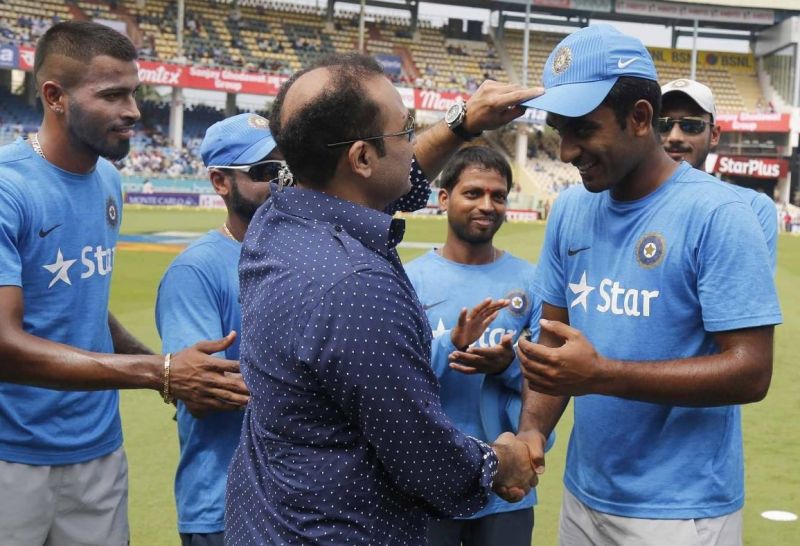 Batting together, the former India opener and Jayant had scored hundreds last year.

The Indian cricket team, during this game, sported jerseys with their mothers’ names on in support of BCCI-Star Plus’ Nayi Soch initiative. The move is a symbolic gesture to champion the cause of women in the country.

Jayant, who must have been happy after he was picked in the playing XI, would have been happier had he got a chance to mention names of both his mothers on the jersey.

As pointed out by Anirudh Chaudhry, former Indian cricket team manager and the current BCCI’s treasurer, on Twitter, Jayant was born to Lakshmi but was brought up by Jyoti Yadav; his second mother.

Jyoti Yadav brought him up like her own son and offered all the support which helped him become a Team India cricketer. Jayant would have wanted to sport both the names, added Chaudhry’s tweet.

Jayant, walked out to bat in the final over of the Indian innings as the team scored 269 runs batting first. He faced a ball and scored a run.