The thinking man’s spinner Ravichandran Ashwin knows that it is far too soon to look at the all-time Indian greats of spin bowling like Subash Gupte, Vinoo Mankad and the famous spin quartet of the 1960s and ‘70s and compare himself to where he is now in comparison to the heights they attained. His exploits have, however, made comparisons inevitable already, but the Chennai engineer should be aware that it is too early to judge. Even so, in challenging everyone in the world order to zoom past the 200 Test wicket mark - slower by just one Test than the legendary Clarrie Grimmett - he has established firmly a name for spin wizardry.

A case can be made against him in terms of home and away performances. He is, however, not the turning track bully he may have been made out to be earlier in his career when he found true tracks abroad unyielding. As a spinner with a keen eye for self-analysis, he knows revolutions on the ball are not everything. The trick is to get the ball to do more tricks in the air in which task he may have learnt a few useful lessons on the tour of Australia before the World Cup. That was the first occasion on which he showed he could conquer the conditions of sporting and true pitches. It can be said without fear of contradiction that he is more of a complete bowler today. 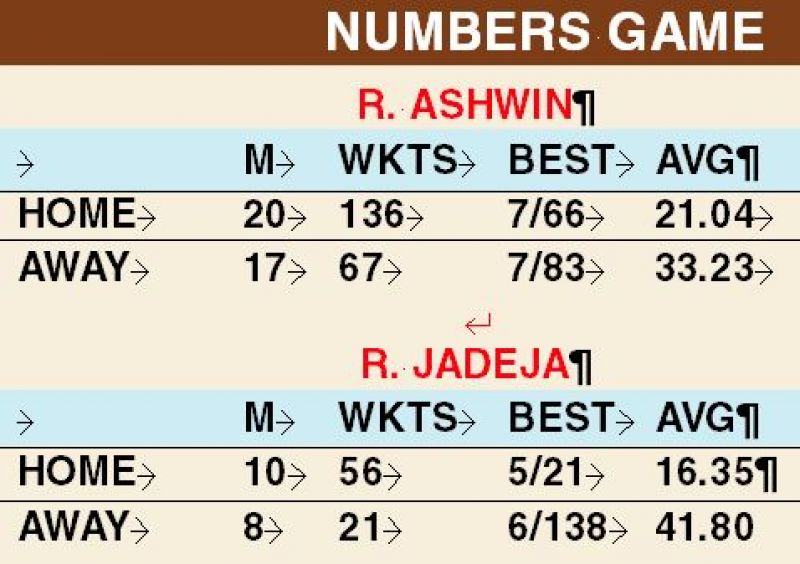 A mastery of the angles has a lot to do with progressing on the spinner’s path. Ashwin Mark 1 seemed to experiment a lot in this direction but somewhere along the line he would have learnt that a basic line of attack is a spinner’s best friend. So much so, Ashwin 2.0 is an abler user of the ball. He is more relaxed in his bowling stride and delivery and it shows in his strike rate too. Not as prone to throw in the carom ball as before, he works on batsmen in a studious and patient manner. Some of the extreme things the ball did in his latest Test may have been due to a wearing Green Park pitch. What shone more steadily in the totality of his bowling in the Test was that he is a craftsman at the peak of his prowess now who lets his thinking show in the variations as well as in the constancy of line and length.

Spinners also hunt in pairs, more so on home pitches where they have been a deadly combination for ages. Ashwin’s comrade-in-arms in this matter is ‘Sir’ Jadeja, a no mean left arm spinner who is at his deadliest when there is something in the pitch. Turning the ball away from the right hander as the left arm orthodox spinner does, Jadeja has less room for manoeuvre. He has to bowl far more at the stumps as the prospects are less when such a spinner pitches outside the leg stump unless there is a huge rough there.

What Jadeja proved capable of was to aim at the rough around off stump to create doubts and in fact did more of the damage in the first innings when the pitch played far better.

The turning point may have come in one spell of four overs that the two bowled in tandem at the two set batsmen in Tom Latham and Kane Williamson, who could not get the ball away even for singles. The pressures had built to a cooker like atmosphere and predictably one of the architects of the Kiwi resistance, fell leg before soon. He merely missed a half volley aimed at his feet but then Latham had been reduced to that state of confusion by those great overs bowled long after the rain had come and gone.

It is clear we will see the spin twins of the 2010s - Ashwin and Jadeja - in concerted action this season when there are 12 more Tests to play on home soil. The wickets the pair is likely take in those dozen matches could be mind boggling. And then, of course, there is Ashwin’s competence with the bat which makes him the top rated Test all rounder of the time.

Ashwin is certain to become the most accomplished cricketer out of Tamil Nadu in 84 years of Test cricket, if he is not already that in his Test figures of 203 wickets and 1,479 runs at an average of 34.39 with four centuries, all against his favourite whipping boys from the West Indies.