Ajinkya Rahane was asked to lead the side after Virat Kohli was ruled out of the fourth and the final Test due to a shoulder injury. (Photo: AP)

Johnson's comments came after stand-in skipper Rahane led the side to an eight-wicket win against Australia in the final Test in Dharamsala and eventually to the four-match series win 2-1.

Rahane was asked to lead the side after Kohli was ruled out of the fourth and the final Test due to a shoulder injury, which he sustained while putting in a dive on the first day of the drawn third Test in Ranchi.

Following the match, Johnson took to his Twitter account and wrote, "Rahane should stay captain! It was a tough series but I believe it should stay on the field with the players". 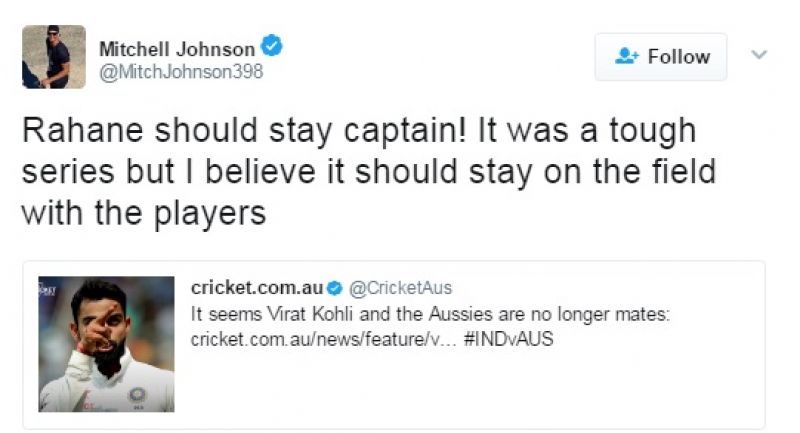 Johnson did not stop there and also hit back over Kohli's recent comments about friendship with Australian players.

Prior to the opening Test at Pune, Kohli had said that regardless of what is said and done in the heat of moment is invariably forgotten when the teams vacate the combat zone.

However, after what all happened between and during Tests, the Indian captain has declared those friendships irretrievably broken, and the relationship and trust he thought he had with the Australian players has been tarnished.

"No, it has changed. I thought that was the case, but it has changed for sure. As I said, in the heat of the battle you want to be competitive but I've been proven wrong. The thing I said before the first Test, that has certainly changed and you won't hear me say that ever again," Kohli told in a post-match media conference.

Earlier, Australia captain Steve Smith, ahead of the start of fourth Test, said that the team would be in fine hands if led by Rahane.

He further went on to say to that the Mumbai batsman was "calmer, chilled out and doesn't get too emotional".

Kohli's shoulder injury was mocked by Australian all-rounder Glenn Maxwell during the third Test in Ranchi, while skipper Steve Smith had also accused the Indian skipper of telling lies after the latter had said his Australian counterpart had, more than once, sought help from the dressing room for DRS.